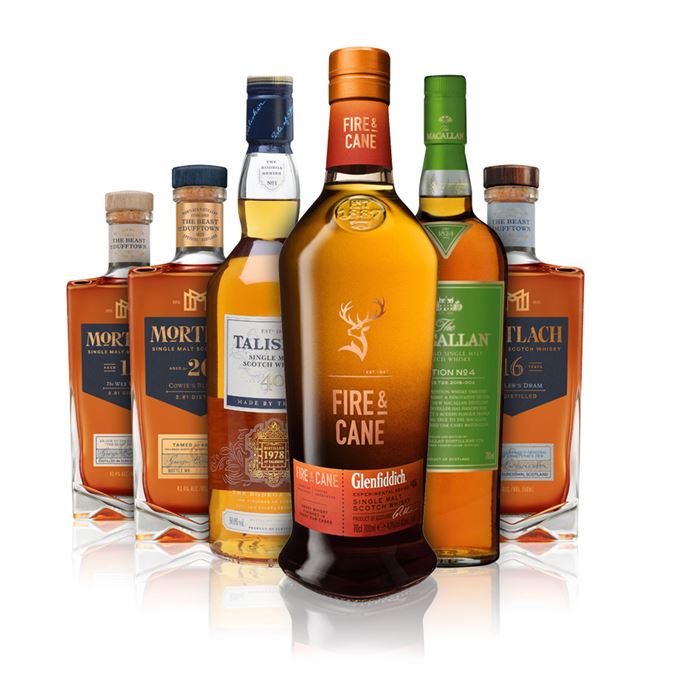 But first, Scotchwhisky.com editor Becky Paskin gets acquainted with the fourth expression to join Glenfiddich’s Experimental Series – Fire & Cane. A no-age-statement peated malt finished in ‘Latin’ rum casks – a curious rarity in Scotch – she finds it fruity, sweet and smoky, but lacking integration. ‘A whisky of two halves,’ she surmises.

Sticking in Speyside, Paskin moves onto Macallan’s Edition No 4, an expression matured in both European and American oak casks that’s designed to explore the structure of the whisky. ‘Glorious,’ she says, adding that at £80/US$110 a bottle you might want to seek one out quickly.

At the heart of this week’s reviews is the new core range from Mortlach, the ‘Beast of Dufftown’. It’s a trilogy of waxy, meaty whiskies – a 12-, 16- and 20-year-old – that leaves Paskin delighted with Diageo’s decision to relaunch the distillery’s range. ‘A real descent into the belly of the Beast,’ she remarks.

Finally, up north to Skye, where one of the oldest expressions from Talisker has been bottled as the first in a series of Sherry-focused expressions. The 40-year-old, distilled in 1978, which has been matured in refill American oak barrels and finished in amontillado Sherry casks from Delgado Zuleta, whisks her away on a salty sea breeze to the Mediterranean coast. Talisker excels in Sherry casks, she says, and this is ‘no exception’.