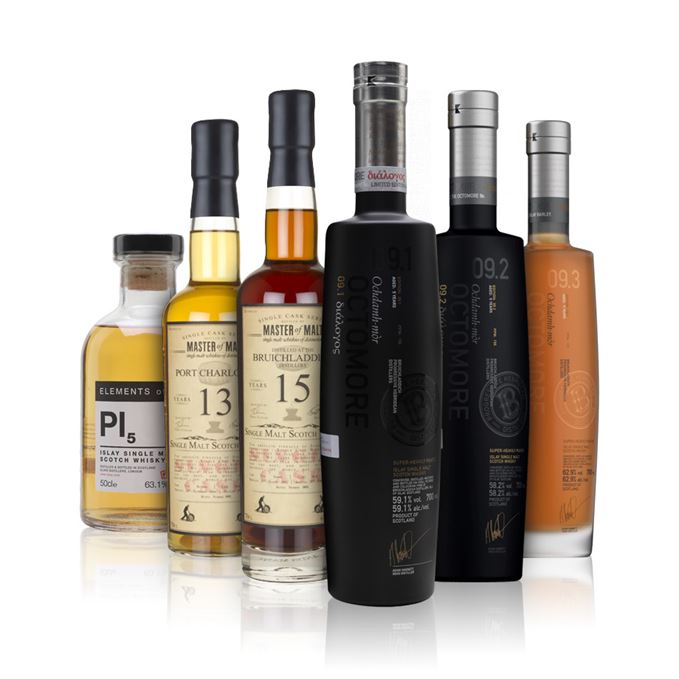 Next up is the first of three five-year-old Octomores, Bruichladdich bottlings renowned for their peatiness, although Broom finds a more delicate mint flavour amid the ‘turfy smoke’ coming off Octomore 9.1. Despite the smoke, Broom claims that things haven’t quite ignited.

Octomore 9.2 fares better, with sweet characteristics such as fresh berries and fruit pastilles coming forward. ‘Still young and vibrant, but balanced,’ says Broom, as the sweetness gets offset by a briny element.

Octomore 9.3 is heralded as the best of the bunch, with an ‘unctuous and almost waxy’ mouthfeel pairing well with a fatty nose. It’s made with barley grown on Octomore Farm, close to the distillery, and regardless of whether that has any impact on flavour, Broom dubs it the most ‘rounded’ and complete of the trio.

An independent Port Charlotte offering from Elixir Distillers, its Elements of Islay Pl5 bottling is described as a ‘short, sharp shock’, with Broom likening it to a smoke grenade. Dilution curbs the heat but not the smoke, leading him to recommend it for a certain kind of whisky lover, but not everyone.

A final Master of Malt bottling, Port Charlotte 13-year-old has a discernible sweetness and a bit of butter in the mid-palate. Broom recommends a little more sweetness, but encourages ‘the brave and the bold’ to give it a go.

Batch 173 02/11/2018 It’s a Bunna’ bonanza this week, as Dave Broom tastes six drams from the Islay distillery.
View All
Scroll To Top