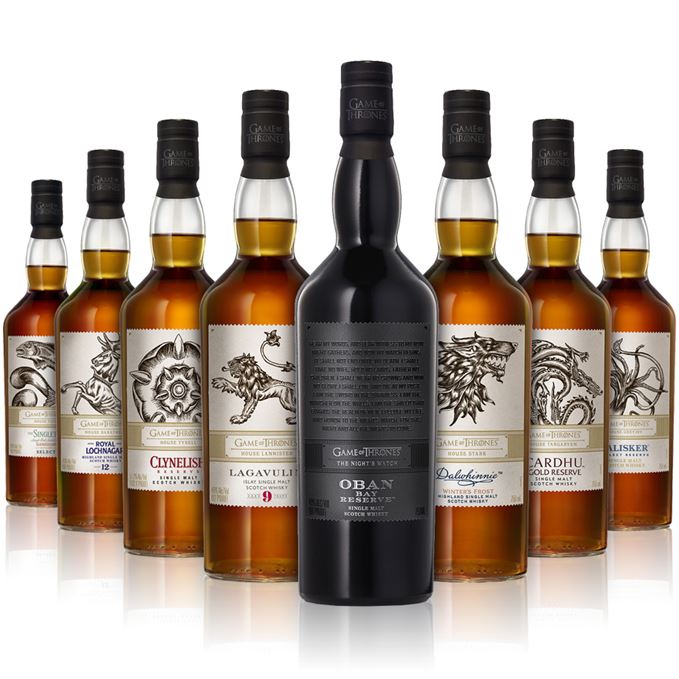 At last. They’ve been launched in the US since November and while it’s taken as much cunning and resolve as a twisted Lannister scheme, we’ve finally got our hands on samples of the much-anticipated Game of Thrones single malts.

Eight whiskies, each from a different distillery in Diageo’s portfolio, have been chosen to represent the seven Great Houses of Westeros, and the stewards of the Wall, the Night’s Watch.

Six expressions in the collection feature completely new liquid bottled especially for the series, although the Royal Lochnagar 12 Year Old and Cardhu Gold Reserve are rebottlings of their namesakes that are widely available in Europe and other markets. Both editions, however, are new to the US.

The collection is set to launch globally at the end of February (precise release date tbc), in preparation for the airing of the eighth, and final, season of Game of Thrones in April. Excited yet?

Who will be the victor in the battle for the Iron Throne? When it comes to the whisky at least, Scotchwhisky.com editor Becky Paskin has her bets firmly fixed on a particular Islay bottling.

In the spirit of mounting anticipation for the final series, an accompanying soundtrack has been compiled courtesy of Ramin Djawadi, the composer for Game of Thrones’ score (see links in Right Place, Right Time).

Batch 183 18/01/2019 Pitting Master of Malt against Gordon & MacPhail as both bottlers take on Chivas distilleries.