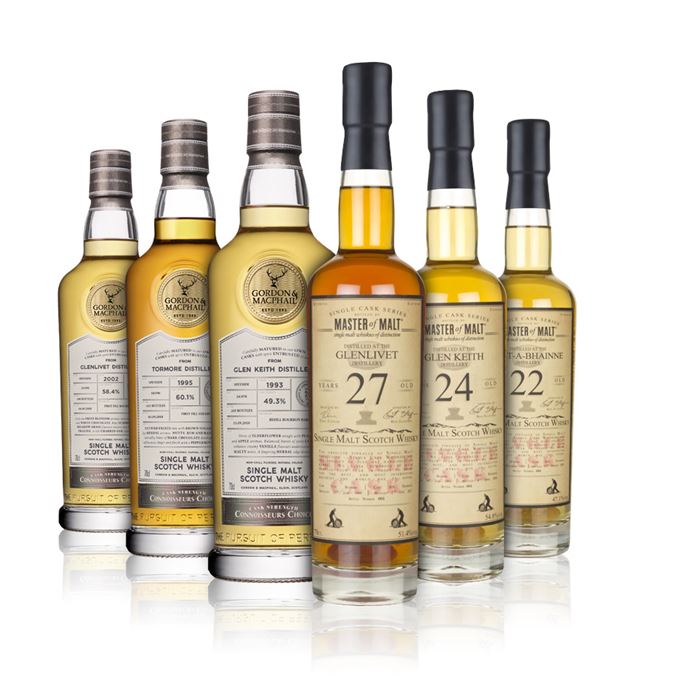 It’s an alternative Chivas line-up this week, as Dave Broom makes his way through the company’s distilleries via two indie bottlers – the old guard Gordon & MacPhail (G&M) against the ‘upstarts’ Master of Malt (MoM). The results are somewhat mixed.

First up is MoM’s 22-year-old Allt-a-Bhainne. Bottled in January last year, Broom finds ‘freshness and bite’ with clean linen on the nose, but he feels the ‘flighty’ mid-palate requires an anchor.

Next up is G&M with a Glen Keith distilled in 1993. It’s pleasant enough, yet Broom finds none of the complexity needed here to elevate the dram any further.

MoM retorts with its own ’93 Glen Keith, but it’s unfortunately a swing and a miss. ‘You spend ages trying to tease things out,’ says Broom, ‘but with all the whiskies out there, will anyone really bother?’

However, the derailing train is righted thanks to a 15-year-old Glenlivet from G&M, exclusive to drinkers in Asia and Oceania. With fresh pineapple on the nose and sugared almonds on the palate, Broom rates it as ‘a pretty classy dram’ for fans of Glenlivet’s original Nàdurra expressions.

Not to be outdone, MoM retaliates with a 27-year-old Glenlivet that’s ‘truly excellent’ according to Broom, but he bemoans the price when compared to the 25-year-old distillery bottling.

Finally, a Tormore 23-year-old, another Asia and Oceania exclusive, reminds Broom of an irate squirrel and a castle dungeon – in that order. Broom’s notes reflect the whisky’s nature, which is ‘by no means unpleasant, but distinctly odd’.

Like the ratings, this week’s playlist is all over the place, with jazz’s legendary Carmen McRae rubbing shoulders with Milkshake singer Kelis. An eventful batch of reviews for an eventful, exhausting week.