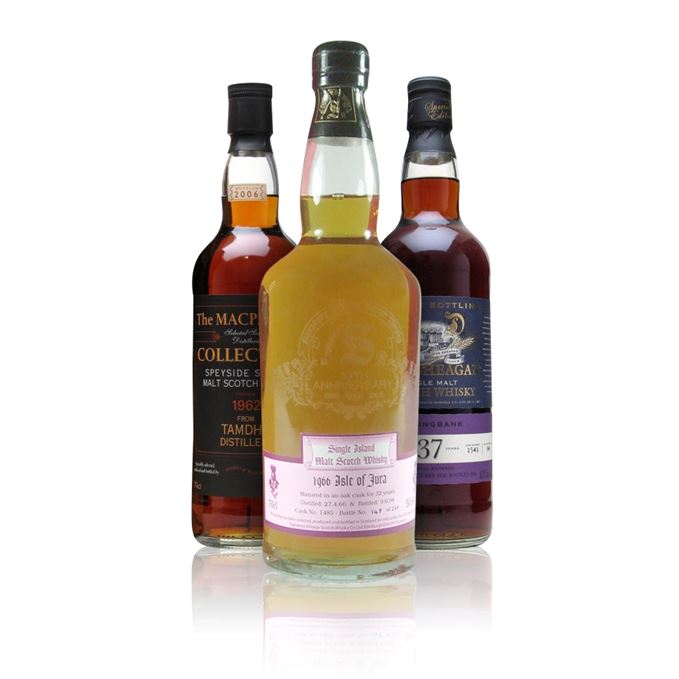 For this batch of old and rare whiskies, Angus MacRaild delves into three impressive, well-aged single malts, all distilled in the 1960s. All of them display admirable, and in some cases exceptional, qualities derived from long, slow and patient ageing in good-quality casks.

First up is Jura 1966, bottled at 32 years of age by Signatory for its 10th anniversary: a terrific example of an older island malt with its invigorating, fresh and fruit-forward characteristics. However, unlike a number of sister bottlings of Jura distilled in the same year, MacRaild finds this one just a tad underwhelming.

You can’t say the same about the next dram: a 1968, 37-year-old Sherried Springbank from bottler Ian MacLeod, part of its Dun Bheagan series. This is a pristine and timely reminder of why 1960s Springbank is regarded so loftily by enthusiasts.

MacRaild finds it a show-stopping and rather breathtaking example of the power, concentration and sheer beauty that this distillate can achieve at greater ages – especially when married with high-quality Sherry casks, as in this instance.

We close with a Tamdhu 1962 bottled in 2006 by Gordon & MacPhail under its ‘MacPhail’s Collection’ label at a perfect 43% abv. MacRaild finds it a delectable and deeply satisfying example of why, when age really works, it can produce some pretty unbeatable characteristics and qualities.

Rare Batch 34 14/03/2018 Some well-aged drams from Bruichladdich, Dalmore and Deanston are plucked from the vaults.
View All
Scroll To Top