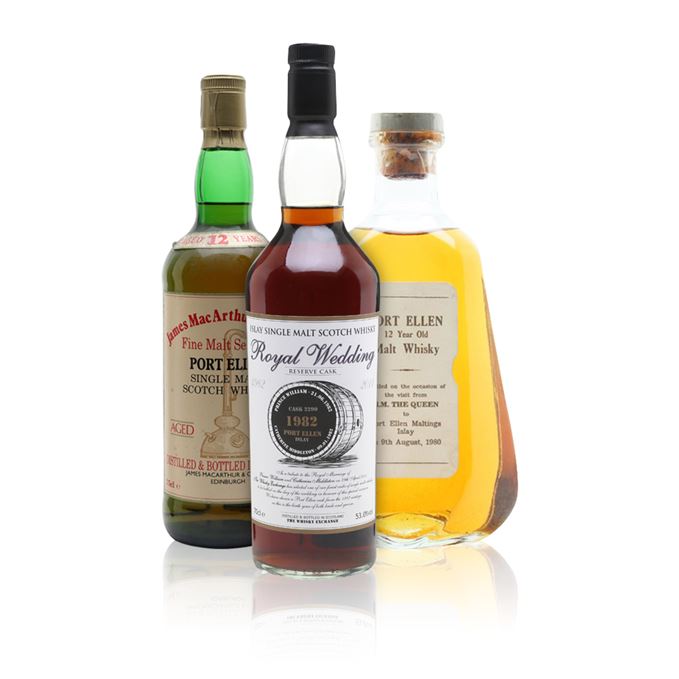 A recent opportunity to acquire samples of some of the world’s rarest bottlings of Port Ellen has tempted Angus MacRaild to dedicate this latest old and rare tasting to this most lauded, cult and debated of distilleries.

While some remain divided over the merits and qualities of the distillery’s output, MacRaild argues that there are many bottlings that sit comfortably in the pantheon of greatness and affirm it as a legendary distillate. While it may be possible to pick and chose some clunkers from among the hundreds of single casks released over the years, and there are those that find the distillery character a tad too brutal at times, MacRaild believes that when Port Ellen really shines, it can be truly dazzling.

For this session MacRaild has lined up three Port Ellens with pretty serious reputations. First up is a 1982 vintage bottled in 2011 by The Whisky Exchange to commemorate the Royal Wedding of William and Kate. A scarce and potent example matured full term in a pretty active Sherry cask.

Following is perhaps one of the most famous and elusive Port Ellens – the 12-year-old official bottling for the Queen’s visit to the distillery in 1980. Until the Malting’s Anniversary 21-year-old in 1998, this was the only official bottling of Port Ellen. Indeed it is one of just two known examples released while the distillery was still in operation, the other being an even more elusive 12-year-old 1970 bottling by Samaroli that is reputed to contain Port Ellen. It is also worth noting that the whisky inside this one was drawn by Iain ‘Pinkie’ McArthur from two 1967 Bourbon hogsheads, making this the only known example of 1967 Port Ellen. This bottling has garnered something of mystical reputation since one was opened on Islay back in 2015 and gained a score of 99/100 on Whiskyfun, Serge Valentin’s highest scoring whisky ever.

To crown it all off is the 12-year-old ‘pale’ version by James MacArthur. One of the very earliest independent bottlings of Port Ellen released in the 1980s, this would have been distilled around the early-to-mid 1970s and is often considered a companion piece to the even scarcer dark Sherry versions. The pale one itself, however, is still widely considered something of a masterpiece and MacRaild finds it hard to disagree with that assessment.

Rare Batch 37 25/04/2018 Three legendary (and rightly so) SMWS bottlings, including the very first from the society.