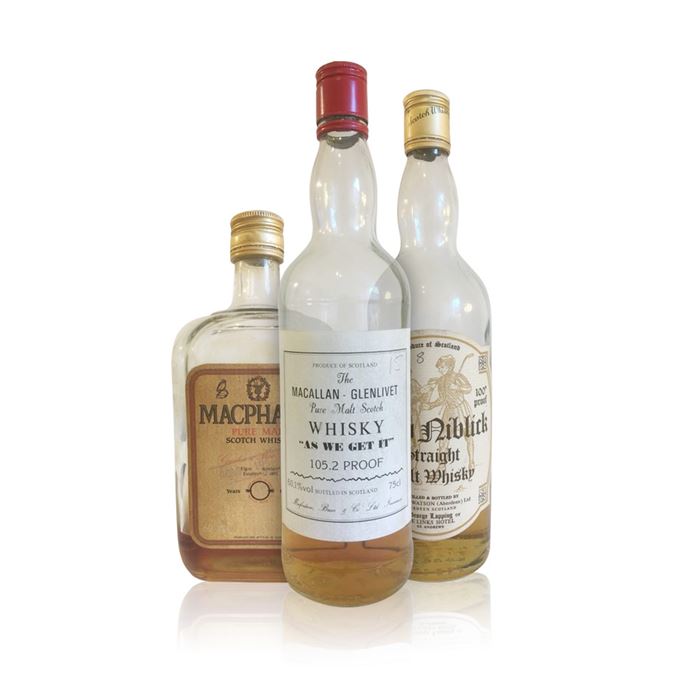 Obscurity might be the theme of this week’s old and rare whisky tasting, although ‘high-octane’ might be another, equally apt, way to categorise it.

For this flight, Angus MacRaild has lined up three old examples of higher-strength malt whiskies, all bottled in the 1970s and 1980s, and all demonstrating that ‘cask strength’ wasn’t an entirely new commercial concept in Scotland at the time.

It should also be noted that these whiskies represent – with the exception of the Macallan bottling – some excellent old-style drams at the more affordable end of the price spectrum. As MacRaild often argues, there are still some very tasty, worthwhile old bottles out there if you have some patience and dig deep enough.

First up is probably the most obscure bottling, an Auld Niblick straight malt whisky bottled by Robert Watson of Aberdeen in the early 1970s at 100 proof (57.1% abv). Watson was known for bottling whiskies from such distilleries as Glen Grant and Balvenie at around this time – leading MacRaild to wonder if this is indeed a blended malt or an obscure single example from one of Watson’s key distilleries.

Following that is an old example of Macallan from the fondly regarded ‘As We Get It’ series, bottled in the early 1980s by original brand owner MacFarlane, Bruce & Co. of Inverness. MacRaild finds this a fascinating example of older-style Macallan, wearing a much lighter cloak of Sherry than usual, which helps to reveal the wonderful textural and fatty qualities of the distillate.

To round things off, MacRaild finds a 10-year-old MacPhail’s 106 to be the high flyer in this session: a superb, powerful, yet wonderfully balanced old-style Sherry monster of a dram. The perfect example of why it is often worth keeping an eye on auctions.

Rare Batch 41 20/06/2018 Three rare Japanese morsels are examined, but not all of these Eastern drams show promise.
View All
Scroll To Top