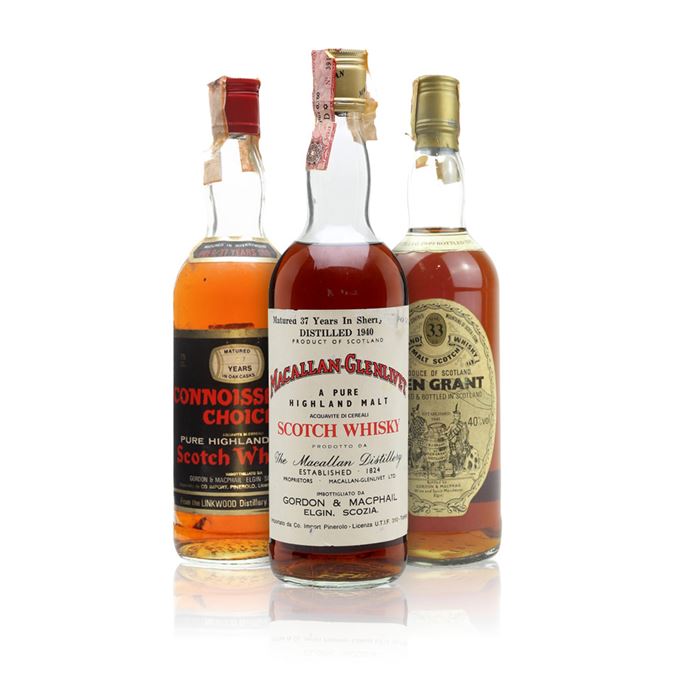 For this rare whisky tasting, Angus MacRaild delves into the remarkable selection of long-aged single malts bottled by Gordon & MacPhail in the 1980s. MacRaild notes that, when talking about the upsurge of interest in single malts in the 1980s and 1990s, the focus is often on the Italian bottlers and importers, and emerging Scottish bottlers such as the Scotch Malt Whisky Society and Signatory.

However, Gordon & MacPhail’s contributions in the form of precious and remarkable stocks of single malts, largely from Speyside distilleries and often distilled around the time of the Second World War, should not be overlooked.

These are now historically significant bottlings that capture Scottish whisky at a turning-point in its evolution. At the time of their release, they were influential in engendering a new wave of single malt fascination; today they exist as bottled liquid history, an organoleptic window on a style of production that is long extinct.

First up is a 33-year-old Glen Grant distilled in 1949 and bottled for Italian importer Sestante. MacRaild finds a low bottling strength of 40% a ‘real issue’ here, noting that the expression hasn’t stood the test of time in bottle.

Things take an upward turn with a 37-year-old, 1939 Linkwood bottled under the Connoisseurs Choice livery, which MacRaild finds to be a ‘sublime’ example of wartime distillation. It is also, he adds, a perfect demonstration of how a slightly higher abv can help older spirit to survive in bottle.

The final whisky is a 37-year-old Macallan, distilled in 1940 and bottled for Italian importer Pinerolo. However, MacRaild notes that the whisky displays characteristics more in common with later, official Macallans – and wonders whether the liquid he’s sampling has come from a genuine bottle that’s been refilled along the way.