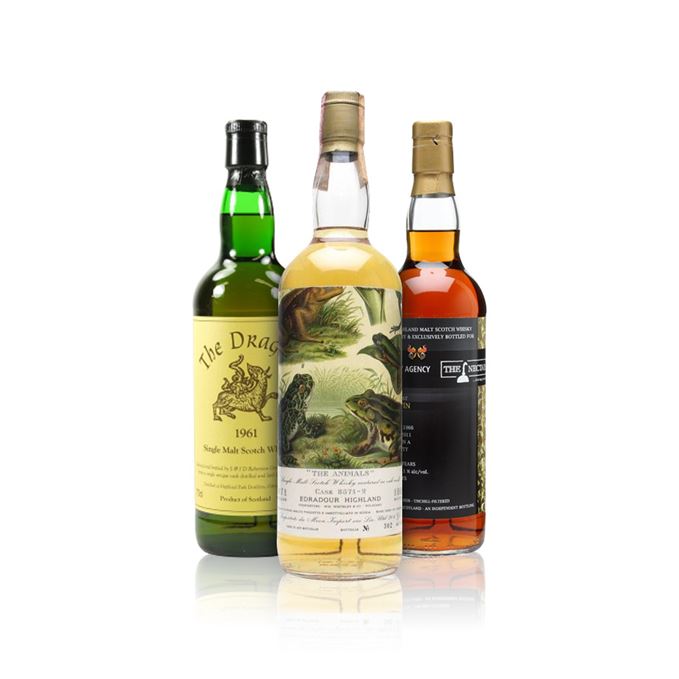 If there is any theme to this latest old and rare whisky tasting, it’s randomness. Angus MacRaild has lined up three rather disparate, but equally interesting in their own ways, old single malts.

Kicking things off is a 1971 Edradour bottled in 1990 by Moon Import under its ‘Animals’ series. MacRaild finds it to be little short of an abomination of a whisky – one that’s almost depraved in its soapiness; a fascinatingly bad whisky that shows the extremes of character and quality that are possible in this drink.

Thankfully, after a considerable amount of palate recuperation time, MacRaild finds the Highland Park 1961 Dragon bottling to be a sublime, idiosyncratic example of aged Highland Park at its waxy, peaty and fruity best.

To round things off there is a 45-year-old 1966 Tomatin bottled jointly by The Whisky Agency and The Nectar. It’s an excellent example of a whisky that’s been bottled just before it spirals off into over-tannic undrinkability.

Even if, as MacRaild points out, it doesn’t really display the more exotic, fruity aspects of Tomatin’s character that we’ve come to associate with the distillery, it remains a solidly drinkable old dram.

Rare Batch 43 18/07/2018 A trio of Gordon & MacPhail gems distilled around the time of the Second World War.
View All
Scroll To Top