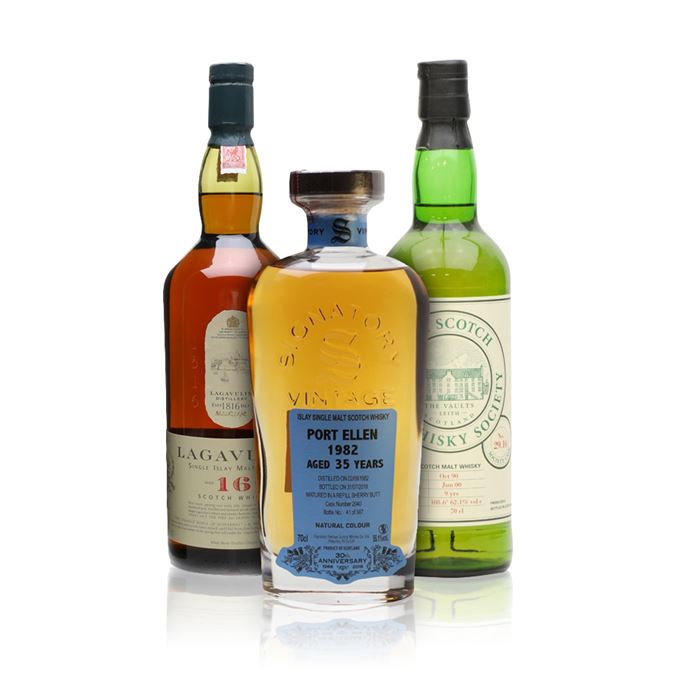 Islay is the focus for this week’s rare whisky tasting, as Angus MacRaild selects two older bottlings of Lagavulin and Laphroaig, and one recently-bottled example of closed distillery Port Ellen. According to MacRaild, not a single dud is found in the bunch.

For starters is a litre bottling of Lagavulin 16-year-old from the late 1990s. MacRaild finds it a classic example of this mainstay whisky at its best, with an oily, peaty profile that dominated the 16-year-old’s earlier batches during the White Horse era pre-2000.

From the restraint of the Lagavulin MacRaild comes to the all-out boisterousness of a 1990 nine-year-old Laphroaig bottled at 62.1% abv by the Scotch Malt Whisky Society (SMWS). A ruthless dram that takes no prisoners, it remains thoroughly in charge throughout proceedings. As MacRaild notes, it’s a hard whisky to score, but those who love it will really love it.

From brute power of youth to the mouth-watering complexity of age and elegance is a 35-year-old Port Ellen distilled in 1982 and bottled by Signatory in 2018 to mark its 30th anniversary. MacRaild finds it a masterful example of how great distillate, refill wood and time can combine to create a ‘stunning’ dram.