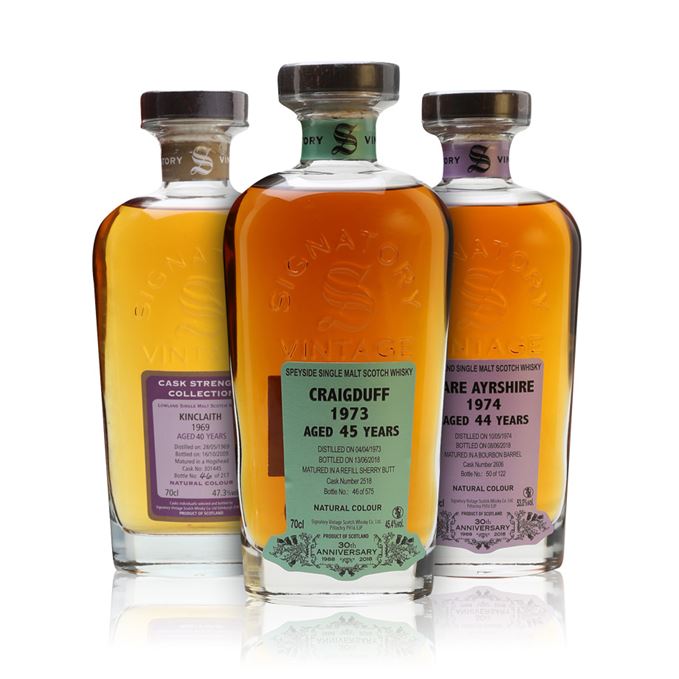 For this week’s rare whisky tastings, Angus MacRaild has selected three bottlings from Signatory Vintage that represent both scarcity and obscurity in Scotch single malt whisky: examples from Craigduff, Kinclaith and Rare Ayrshire (mostly commonly known as Ladyburn). All are names rarely seen these days, and are often hard to tick off the tasting list.

First up is Craigduff. The jury still remains out on whether this experimental peated malt was made at Strathisla or Glen Keith distillery. Chivas insists it was Strathisla, while others – notably Andrew Symington, who has been responsible for most of the extant bottlings – say it was distilled at neighbouring Glen Keith. Stories abound about peated water being transported from the Western Isles in drums and being subsequently concentrated and added to the wash distillation. While the exact origins of Craigduff may be in doubt, MacRaild finds this particular bottling a ‘stunning’ example of older Speyside single malt, which has retained balance, complexity and freshness.

Following on from the mysterious Craigduff is the rarer, yet better understood, Kinclaith. Produced for just shy of 20 years, Kinclaith was a blending malt distilled at Glasgow’s Strathclyde grain distillery between 1958 and 1977. The vast majority of it went into Long John blended Scotch, and although a few casks have popped up over the years it remains one of the scarcest names in Scottish single malt whisky. MacRaild finds this example nodding curiously in the direction of older Irish whiskeys – a phenomenon he credits to maturation in a very tired cask. After 40 years of ageing, this allows a satisfying glimpse into the Kinclaith distillery character.

Finally in this session of lost names is Rare Ayrshire, or as it is also known, Ladyburn. Another malt distillery situated within a grain plant, this time at William Grant & Sons’ Girvan distillery, Ladyburn existed for just nine years between 1966 and 1975. There have been more than a few bottlings under the Ladyburn and Rare Ayrshire labels over the years, though as MacRaild notes, this is by some distance the best he’s tasted.