A licence was granted for the distillery in 1818, but whether it made whisky is another question.

A distillery in, or linked to, Dundas Castle, a baronal-style mansion and estate sitting about five miles west of Edinburgh and two miles south of the Forth Bridges and South Queensferry.

It was not that unusual for grand estates in bygone times to have their own brewery and distillery, although it is possible the Dundas Castle distillery never actually made any whisky. 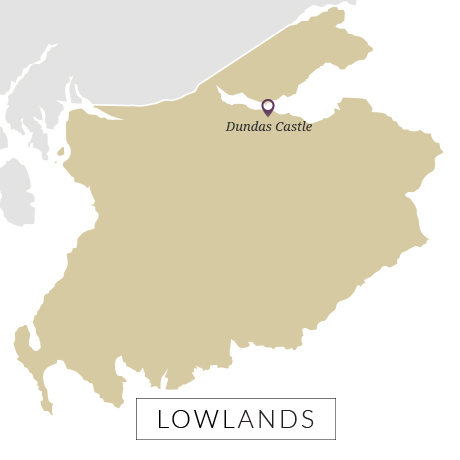 The distillery was licensed in 1818 to James Dundas of Dundas, who at the time was having the castle completely rebuilt. It is possible no actual distilling occurred there; simply that James Dundas obtained a distilling licence with the intention to distil, but abandoned the idea.

Originally a ‘keep’, which could be both residence and fortress (Cromwell stayed there in 1650), the castle’s 17th century section was demolished and replaced in 1818 by a Tudor Gothic house designed by the architect James Burn, all on the orders of then heir James Dundas. The distillery must have been part of the design, but no information is available on the distillery or its stills.

The castle was sold by the debt-saddled Dundas family to William Russell in 1875, who in 1899 sold it to Stewart Clark, an industrialist and philanthropist.

During World War II, the castle became the headquarters for soldiers defending the Forth Rail Bridge. Stewart Clark’s great-grandson, Sir Jack Stewart-Clark, started modernising the neglected castle and estate in 1995 and the castle today is a five-star wedding, conference and reception venue.