Originally called Clockserrie or Clockserie, Isla is a well-chronicled distillery at Bridgend in Perth that survived three quarters of a century from the mid-1800s.

Up until the early 20th century, the distillery was run by three generations of the Forbes family: Alexander, his son John and grandson Sam.

On his visit in 1884, the whisky writer Alfred Barnard recalled that Isla had two wash and two spirit stills, all small, and an annual output of 30,000 gallons (136,000 litres). Cooling water came from the Clockserrie Burn, and process water from the Tay, but tapped well upriver. Lighting was by Bower lamps, a forgotten system hailed by Barnard as ‘second only to electric lighting’. 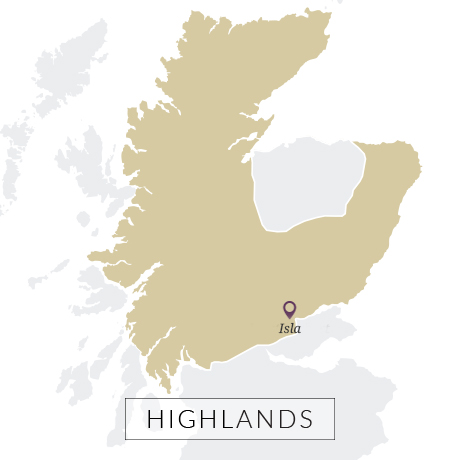 Isla was converted into a distillery from a bankrupted brewery – also called Clockserrie or Clockserie after the burn which flowed down from Kinnoull Hill to the River Tay – by Alexander Forbes in 1851.

Reflecting the Forbes’ family values, the firm was renamed John Forbes & Son in 1900 as Alexander’s grandson, Sam, joined the business. Isla distillery was operated as such until 1920 when it was sold to Tay Distillery Co. Ltd., which had been established by a consortium of blenders. Unfortunately Tay Distillery Co. bowed to the economic pressures of post-war Britain, and the firm was liquidated three years later.

The distillery was purchased by Isla Distillery Ltd. in the same year, and it looked as though Isla’s future may have been secured, but by 1926 Tay’s successor also failed and the distillery closed permanently.

After Isla’s closure, parts of the premises were used for some years by Perth brewery Wright’s for warehousing and storage, but almost all traces of the distillery have now disappeared. Any last bottles of Isla whisky have also long since been drunk.