Where did the term ‘lyne arm’ come from?

Following last month’s reader letter enquiring about the function and role of the lyne arm in distilling, a question about the origin of the term has the Whisky Professor scratching his head. Where did ‘lyne arm’ come from – and have we been using the wrong word all along? 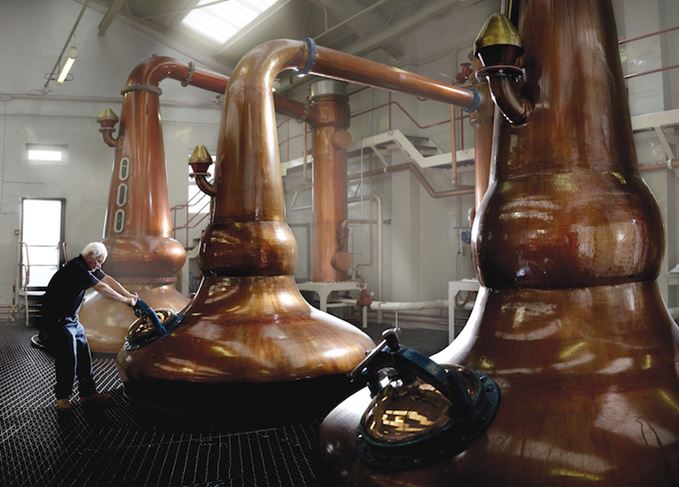 Puzzle piece: The lyne arm connects the still to the condenser, but its etymology is an enigma

I read your recent answer about lyne arms with interest. I know that you normally answer questions about technical matters, but I was hoping that you might also know where the term ‘lyne arm’ comes from. In the Scots dictionary, ‘lyne’ can mean either ‘pool’ or ‘recumbent/prostrate’, coming as it does from the Gaelic linn, but neither definition quite rings true. I’ve struggled to find an answer and, I must confess, it is beginning to bug me.

Lyne legacy: The Prof speaks to colleagues far and wide to determine the origins of the term

While I would not consider myself an expert in the etymology of distilling terminology, I too have often wondered about this, mainly because I have heard and seen the term lyne arm and lie pipe (sometimes written lye pipe) being used interchangeably. Your letter allowed me to ask some colleagues in the industry, who are better-versed in this topic, for their thoughts.

My starting-point, as so often, involved a trawl through Alfred Barnard’s Whisky Distilleries of the United Kingdom, but I could not find a reference to the term, suggesting that he either did not ask (and Barnard, it has to be said, was not always as assiduous a chronicler of technical details as we assume), or that it was not a term used at the time. There is also no mention of the term in either Morewood’s 1838 Inebriating Liquors, or the early 20th-century technical works of Nettleton.

Could it simply be a slang term, perhaps a corruption of ‘lying’, as it lies between the swan neck and the condensing system? While not wholly dismissing this explanation, it didn’t quite ring true. I did, however, persevere with my etymological investigations.

I agree with you that the old Scots use of the word lyne meaning ‘pool’ doesn’t quite fit, but driving through Speyside the other day I passed a sign to a place called Lyne of Skene. While I know there are other places across the UK with ‘Lyne’ in their name, this made me wonder if it came from the local Doric dialect.

A local coppersmith of many years’ standing then told me that he and his colleagues never called it a lyne arm, but a ‘lye pipe’, ‘lye’ being Doric for lay. ‘In the old days of the illicit stills, it would always slope down or lay down from the swan neck to the worm,’ he explained.

I had also contacted friends in Ireland. In a glossary of distilling terms produced on the completion of the new Midleton distillery, ‘lyne’ is described as ‘a corruption of lying. The horizontal arm between the neck of the pot still and the worm’, which sent me back to it being a slang term.

Soon afterwards, however, the investigation took another turn down an Irish lane when a colleague passed on this extract from Forbes’ Short History of the Art of Distillation (1948).

‘In Irish distillation, the pot-still is still a favourite, though the size is usually much larger [than in Scotland]. A special feature of the Irish pot still is the “Lynne-arm”, the tube connecting the still with the worm cooler.

‘It usually goes up vertically 10’ to 20’ from the still and then runs horizontally for some 30’ to 40’. This horizontal branch has a slight depression which is sometimes cooled in a trough. It works as a kind of crude reflux condenser, the condensate of which is led back into the still.’ [my italics]

Modern slang: Lyne arm or lye pipe – which is the correct term to use today?

Why ‘Lynne’, though? Perhaps it was similar to a still design being named after its inventor: Coffey or Stein, for example. Might there have been an Irish engineer called Lynne or Lyne, which are family names in Co Cork and Galway? That, too, led nowhere.

There were, thankfully, two further pieces of evidence backing up Forbes’ assertion that it was an Irish speciality. Both were contained in two depositions to the Royal Commission on Whisky in 1908. Again, I am indebted to my colleagues for this.

Dublin distiller John Talbot Power testified to the Commission that they were using ‘a lyne arm’ when he joined the distillery in 1870, and his account backs up the theory that it was a water-cooled pipe to aid reflux. Interestingly, he also suggested that it was an old technique.

Equally, when Scottish distiller Alexander Cowan was giving evidence, his response to a question as to whether ‘line’ arms were used with Scotch pot stills was a simple ‘no’.

So, to be strictly accurate, I believe that the term ‘lyne arm’ should only be used when referring to this specific refluxing technique.

There is another reason. As Richard Forsyth, chairman of Forsyths coppersmiths, told me: ‘Lyne arm? We always called them lye pipes. Lyne arm was the posh name…’