Why are whisky casks toasted and charred?

Without first heat-treating casks, whisky would just taste green and sappy. But what’s the difference between a toast and a char, and are all casks treated in the same way? The Whisky Professor has the answers. 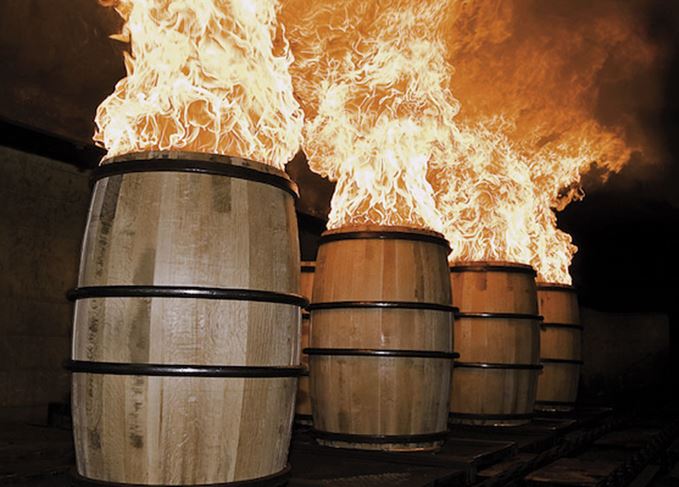 Fire starter: Casks are a major contributor to whisky’s flavour, when toasted and charred

I read your very interesting article about Sherry casks and wonder if you can give me a little more information about how casks are first toasted and charred? I know Bourbon casks have to be charred by law, but are Sherry and wine casks treated in the same way? Also, what is the difference between toasting and charring?

Hot topic: The heat treatment of casks is one of the Professor’s favourite subjects

Many thanks for writing. This is a fascinating – and highly complex – area. I hope that this will give you an idea of some of the reasons behind toasting and charring and the impact which both processes have on a whisky’s final flavour.

In order to construct a cask the staves must be bent into shape which, traditionally, was done by arranging them around a fire, the heat from which not only helped to shape the cask but toasted the inside of the stave. Not only does the toasting break down the structure of the oak, allowing easier penetration by the spirit, it also creates flavour.

This is down to the structure of wood itself. Oak is made up of cellulose, hemicellulose, and lignin. The first gives oak its strength, the second two, when heated, begin to break down and create flavour compounds which are soluble in ethanol adding desirable flavours to wines and spirits.

Hemicellulose contains sugars which caramelise during toasting, giving flavours of nuts (walnut, almond, hazelnut) as well as sweet notes of caramel, liquorice and on occasion butter.

Lignin is transformed into a wide range of flavours which are slowly released into the spirit throughout maturation, adding in floral elements, spice (cinnamon and clove especially), vanilla, chocolate, fruity elements, and green notes (grassiness, pine). Lignin is also present in the husk of a grain of barley and kilning produces the same range of flavours as are being created during toasting of wood.

None of these would be absorbed into the maturing spirit if the cask wasn’t first toasted. In addition, the level of the toast will create specific flavours. A gentle toast will add some nuttiness, light vanilla and sweet notes, while a heavier toast will contribute more caramel toffee. However, the longer and heavier the toast is, the lower the level of lactone and tannin becomes.

By understanding the way in which different temperature parameters help to create specific flavours, distillers and winemakers can now fine-tune the toasting process, asking for light, medium, medium-plus, and heavy toasts. It is not simply the length of time taken, but the intensity of the heat and the amount of time the peak temperature is maintained. The late Dr Jim Swan was one of the most prominent researchers in this area.

To get back to your question, all casks are toasted. Those used for wine and Sherry will only be toasted. When we turn to Bourbon, however, the process continues with charring, which as I’m sure you know is one of the legal requirements for that style of whiskey.

The casks used for Bourbon will be made in the standard fashion with toasted staves. Once the cask has been constructed the whole of the interior is then given a controlled burn.

The Bourbon industry generally uses four types of char – a No.1 char will see the cask be fired for 15 seconds; No.2 for 30 seconds; and No.3 for 35 seconds, while the No.4 Char sees the cask flame for 55 seconds. This last char creates plates of charcoal on the inner surface of the staves, hence its nickname, the ‘alligator char’.

Charring does a number of things. It helps to further break down the structure of the oak allowing easier, and deeper, penetration by the spirit, and a more intense interaction with the flavours produced through lignin degradation. The cracks produced in the surface also increase the surface area available to the spirit.

The charcoal layer which has been created also acts as a filtration system, helping to remove unwanted flavours, such as sulphur, from the new spirit. Charring also increases the levels of vanillin, cacao-like flavours and spiciness. On the other hand, the heavier the char the lower the levels of tannin and oak lactones.

I hope this helps and thanks for writing.