Brown-Forman’s cooperage in Louisville, Kentucky produces most of the barrels used to mature Jack Daniels, Woodford Reserve and many other whiskeys. Its plant director tells Becky Paskin how the site keeps up with soaring demand for Bourbon barrels. 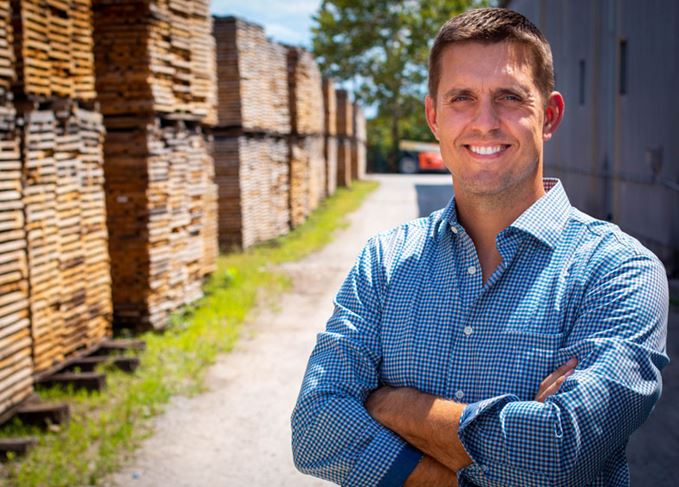 Cooperage caretaker: Michael Nelson oversees the creation of around 600,000 barrels a year

‘We’re making about 2,300 barrels a day, and that’s across two 10-hour production shifts. We have folks here around the clock, some production through the night but our heavy production starts early in the morning and ends late into the evening, about midnight, and then we do it all again the next day.

‘The production rate has been as many barrels as we can make, at least for the five years I’ve been here. As needed we’ll work some weekends: whatever we can make, the distilleries can use.

‘Brown-Forman satisfied that demand for extra capacity by putting another cooperage online in Alabama – they’re making about half of what we make, about 1,300 barrels a day. They were built to expand so as demand for the whisky grows, we can support those needs through our cooperage organisation, though they are currently operating at capacity as well.

‘Most of what we make here supplies Jack Daniels, Woodford Reserve, Old Forester and Early Times, and some we send down to Mexico to our Tequila distillery [Herradura]. Jack Daniels gets the majority of barrels, as they are the biggest distillery.

Fast workers: Coopers each raise 300 barrels a day at the Brown-Forman cooperage

‘Our oak is sourced from all over the eastern United States. We have a team that sources the logs; they go to mills, where they quarter-saw the lumber so we have the right grain structure and profile to hold the liquor in. American white oak is used because the tree naturally fills its pores with a substance called tyloses, so to cut that wood in a quarter sawn method gives you the ability to hold that liquid in. We source that from all the way down to the gulf in the south, up north to Minnesota, and out east into Virginia.

‘There are differences between the oak grown in various places, but by the time it’s in our plant it’s all mixed up. With the volumes we’re putting through our cooperage there’s no way to know that that barrel has three staves from Tennessee and four from Minnesota and the rest from Ohio. We don’t know. Essentially once it gets into our facility we’re just looking for defects – knots, worm holes, too much sap, rot… not necessarily where it’s from.

‘We don’t own any standing timber in Brown-Forman; our wood procurement group has a close association with regional forestry associations because it’s crucial for our industry in general that we make sure that white oak, which is a sustainable resource, stays that way, because without it our industry doesn’t exist.

‘Once the lumber shows up on our yard we like to let it age for three to six months, let Mother Nature do its thing. It’s called seasoning. It sits out in the weather, gets rained on, snowed on in the wintertime, and that releases some of the tannins in the wood, but it’s also starting to dry the lumber. Then we’ll put it in a kiln and dry it down to about 12.5% moisture, and then we’re able to machine the wood – shape it, plane it, cut it.

Perfect fit: The stave edges are shaped so they can slot neatly together into a barrel shape

‘If it’s been very wet and rainy the last year it means you have to dry it in the kiln a bit longer. It goes in the kiln for a few days to a few weeks, depending on the moisture content of the wood. They get as hot as 150F. There’s a whole science behind drying wood – if you dry it too fast, too quick, it will cause splits and defects as the moisture tries to escape the cells of that wood, so it’s got to be dried slow.

‘We have the capability of having a lot of control over how we toast, which is why we don’t show that off and it’s proprietary. If a master distiller like Chris Morris [for Woodford Reserve] wants to play around with a Master’s Collection or something that he wants to try differently, we have the ability to tweak and make changes.

‘Toasting is a radiant heat; the marshmallow analogy is a good one – some people like their marshmallows golden brown, others like to catch ‘em on fire. What we’re doing is a combination of the two. The radiant heat, or the toast, is the same process – it’s caramelising sugars in the wood like you would caramelise the sugars in a marshmallow over a campfire. Nice golden brown, you’re toasting, you’re not in the direct flame.

Fierce flame: The barrels are set alight to produce a layer of char on their interior surface

‘The char fire is a direct flame – the wood literally catches on fire on the inside and burns until we punch it with water and put it out. A common question I get asked is: “You’re taking the time and effort to toast it and then you catch it on fire. Aren’t you just destroying what you just did?” The answer is yeah, to some degree, but we’re able to set that toast deep into the wood to where we’re not destroying all of that toast, to where we’re able to have the best of both worlds really. On the outside surface you’ve got the char and behind it you’ve still got some toast left in that barrel.

‘Our visitor centre has been open about a year. If you go to cooperscraft.com or go through Mint Julep Tours you can schedule a private tour at certain times of the day. One of the things were pretty proud of as a company is we’re the only major distiller that operates its own cooperage and barrel making facility, and it’s something that we feel we should show off a little bit. So creating this visitor centre is a nice space to be able to do that.

‘Everyone who comes through here is overwhelmed by the size, the pace and the number of barrels we put out in a day. Most big cooperages put out hundreds; we put out thousands, and people are always surprised by that, by the amount of work and detail that goes into it, the knowledge that’s needed and the different processes that come together as one final barrel. They’d think, “take some boards, slap them together and there you go, you got a barrel,” but there’s so much more to it than that, so much more science behind it than that. When you can actually see it here and smell it, you can’t pick up a glass of whisky ever again and not think about what went into it.’