One of the world’s best-loved and most prolific authors, Alexander McCall Smith writes unceasingly, devoting himself to multiple projects spanning fiction, poetry, music… and whisky. He and Charles MacLean have been friends for four decades. 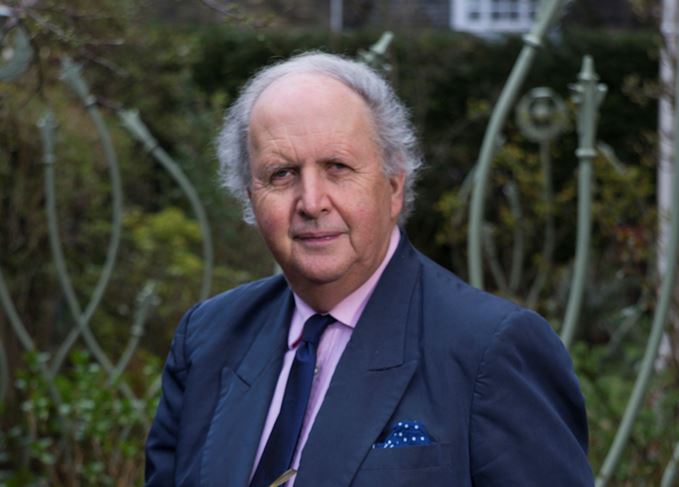 Always writing: Alexander McCall Smith confesses he has 'lost count' of the number of books published under his name

Alexander McCall Smith – known universally as ‘Sandy’ – is commonly described as ‘one of the world’s most prolific and most popular authors’. I have known him for 40 years; we met when he was a law lecturer at the University of Edinburgh and I a graduate student. We shared an interest in publishing, although at that time he had only published academic works, while I was looking for an escape route out of the law...

In 1977 we founded a literary agency together, Maclean Dubois Ltd (under which name I still trade, although I long ago abandoned agency). The name came about when we were discussing what authors we wanted to attract.

Sandy: I think the time is right for another book about My Time in the Foreign Legion. A sure-fire best-seller.

Me: But how do we make sure the legionnaire comes to us?

Sandy: Simple. We call ourselves ‘Jean Dubois Literary Agents’, on the basis that all legionnaires change their name to Jean Dubois when they join the Legion, so will assume we are connected…

This exchange perfectly exemplifies the man’s highly developed sense of the absurd, which first manifested itself in print in his children’s books – as Antoine de St-Exupéry amply demonstrates in The Little Prince, children make imaginative leaps which are beyond the ken of us adults.

Thirty such books appeared during the 1980s and ‘90s, including The White Hippo, The Perfect Hamburger (still in print 30 years after publication), The Tin Dog and The Popcorn Pirates.

Meanwhile, his day-time job focused on medical jurisprudence; in 1983 he published Law and Medical Ethics; Butterworth’s Medico-Legal Encyclopaedia followed in 1984 and The Criminal Law of Botswana in 1992.

At the same time, he was writing first short stories, then full-length novels. The No 1 Ladies’ Detective Agency, which would make his name, was published in a small and silent way by Polygon Books (then the Edinburgh University Student Publication Board) in 1998, followed by three other books following the gentle adventures of Precious Ramotswe, a ‘traditionally-built’ African amateur sleuth in Botswana.

In 2003, the eyes of the world’s largest publisher, Random House, fell upon these books. Sandy was invited to New York, to be met by an editorial committee of 10, all of whom had read everything he had published to date, and all of whom were wildly enthusiastic about the books’ potential in the US and beyond.

It is said that ‘best-sellers are made by publishers, not by authors’. Sandy modestly agrees. Recently he said to me: ‘What has happened to me is a matter of the greatest good fortune, and I owe a great deal to those who have made it happen… I am so grateful that I can now write what I want to write… And that includes The Ladies’ Detective Agency books [the 17th volume in this series is scheduled for this autumn]. When I am writing these books, they bring Botswana vividly to my mind and fill my heart with pleasure. I feel so fortunate that I can express my love of this place and the people who live there.’

The reception of the early Botswana books in the US was wildly enthusiastic. Within weeks, The No 1 Ladies’ Detective Agency was topping the best-seller lists and its author was being fêted like a film-star, presenting readings to audiences numbered in their thousands and appearing on leading TV chat shows.

The obligations which came with such success led him to resign from his many academic positions. Around this time, he and I were in Canada together, jointly presenting talks and whisky tastings in universities, and ice-fishing – the world’s most boring sport. I asked him whether he would ever return to the Groves of Academe, once the furore had subsided.

He never stops writing, and has a huge capacity for work. Indeed, a mutual friend, Prof David Purdie, wrote in his recent book The Dean’s Diaries:

‘Should [Sandy] ever ask me if I’ve read all his books, I’ll have the truthful answer ready: “No! You write faster than I can read…”’

Two men in a boat: Charles MacLean and Alexander McCall Smith have been friends for 40 years

COMPELLED BY THE MUSE

I returned recently from a fortnight’s sailing with Sandy off the coast of Thailand. Every day he was writing, and when I remarked on this, it prompted the following exchange:

Sandy: If you’re a writer, you feel compelled to write. The Muse gives you no peace; themes and stories suggest themselves every day, and writing them down becomes second nature. It simply has to be done…

Me: But some writers are satisfied with only a small output… Hemingway was happy with one good sentence a day…

Sandy: True. But I don’t craft my words in this way, at least not in the first draft. I write very quickly and don’t work out what I’m going to say in advance… 3-4,000 words a day…

Me [in parenthesis, unspoken]: Yes, and you have the capacity to lay out your thoughts rapidly and logically direct onto the page, without the need for deletions and alterations. So unlike most of us! You also have the knack of being able to write wherever you are – in a hotel, on a flight, in this case at 4am on a yacht in the Andaman Sea…

Sandy: Writing fiction comes from the sub-conscious. You pass into a mildly ‘dissociative state’, detached from the world around you, almost dream-like, allowing the imagination free-flow. I start with a basic idea – a character or a place, say – and, as I write, the idea grows and develops beyond my conscious control… Remarkable things happen to my characters, which I hadn’t anticipated!

Me: What have you been working on recently?

Sandy: I have just finished My Italian Bulldozer, about a food and wine writer researching in Italy who ends up with a yellow bulldozer… I had no control over this development! The book will be published in May. The second volume in a series of illustrated children’s books, The Sands of Shark Island, will appear in the UK in July, soon followed by the 11th volume in my 44 Scotland Street series, serialised daily in The Scotsman newspaper. This one’s named The Bertie Project…

Sandy: Yes. As well as The Ladies’ Detective Agency books and 44 Scotland Street, I will soon start the 12th volume in the Isobel Dalhousie series, the lead character of which is a professional philosopher, who often embroils herself in problems which are none of her business and better left to the police; and the fifth volume of the Von Igelfeld series, featuring the absurd adventures of three German professors of Romance Philology... Also I’m planning a new series: the story of a Scottish family throughout the 20th century…
Oh, and I’m also working on the libretto for an opera about the French invasion of Britain in 1797 with a German composer, a suite of poems exploring Scotland and the sea which will be set to music by James Ross, called The Silver Darlings, and another suite of six poems with a young composer, Fergus Hall, The Idea of Heat in Glasgow… I hope that doesn’t give too much away!

Me: You are nothing if not prolific, Sandy. Do you ever muddle the plots between one series and another, like Mario Vargas Llosa’s character in Aunt Julia and the Scriptwriter?

Sandy: My American agent once drew my attention to the fact that my lady detective, Precious Ramotswe, was speaking like Isobel Dalhousie!

Me: How many books have you written, Sandy?

Sandy: Frankly, I have lost count. My agents tell me it’s over 100…

Friends in conversation: the book produced for the launch of Gordon & MacPhail's 75-year-old Mortlach

This time last year, Sandy and I were sailing in the Caribbean with a project to discuss: Gordon & MacPhail had commissioned us to write a short book to accompany their planned bottling of a butt of 75-year-old Mortlach, distilled in 1939.

The designer’s idea was that the book should be a dialogue, a conversation between the two of us, and the brief required that we cover various topics – a brief history of Gordon & MacPhail and of Mortlach Distillery, a discussion about how the way whisky was made in 1939 might influence its flavour, and – most importantly – our thoughts about the flavour of this ancient survivor.

Early attempts at dialogue proved artificial. Sailing between Antigua and Guadeloupe, Sandy came up with a workable idea: while we would stick with the conceit of us sitting by a fire, glass in hand (for a week! The book is titled Seven Nights With Mortlach), he would write a poem for each of the seven nights, inspired by the seven topics of conversation.

He set to work immediately, and by the end of the cruise had completed a suite of delightful, meditative poems on subjects such as Thinking of Scotland from Somewhere Else, Water, 1939, The Properties of Oak and Taste & Memory.

When it came to nosing and tasting the whisky, I wrote up an objective sensory analysis (so far as this is possible!), then explored the whisky with Sandy without showing him my earlier notes, encouraging him to be entirely subjective, to describe where the aromas and flavours took him.

Sandy: I see a bright room; we are seated at a sun-bleached table, freshly waxed with scented polish (lavender?). On it is a bowl of dried apricots and ripe peaches, and through the open window a scent of mown grass…

Me: I see an actress’ dressing room… A handsome woman, d’une certaine âge, is seated before a mirror surrounded by light bulbs, spraying lacquer on her luxuriant hair. Beside her is a jar of scented hand cream, a bowl of exotic fruits, a vanilla ice cream and the dregs of a cappuccino coffee.

Sandy: …Beyond the lawn is a distant coast – a sea-loch – bright sun glinting off the water, with yellow whin bushes in flower running down to the beach. Scents of sea-salt, dry pebbles (they do have a scent, you know!) and desiccated coconut… But wait. Now I am smelling a Bellini cocktail – pureed peaches and Champagne… And now I am transported to Harry’s Bar, Venice, where the drink was invented in the 1930s: brilliant sunlight reflecting off the Grand Canal…

Me: I agree with the Bellini, which my actress is now raising to her lips. [I too taste the whisky]… smooth, fresh and slightly salty, with bitter almonds in the middle and a distinct trace of hemp rope in the finish.

Sandy: It has the texture of velvet, fills the mouth; slightly waxy, lightly sweet and fruity (apricot, rather than peach), then – yes – sea salt and bitter almonds… An old sailing boat passes and I can smell its rigging…

What an evocative dram! What a powerful imagination!