Ever fancied taking a leaf out of the professionals’ book and trying your hand at blending your own whisky at home? It's easier – and more difficult – than it looks, as Tim Forbes relates. 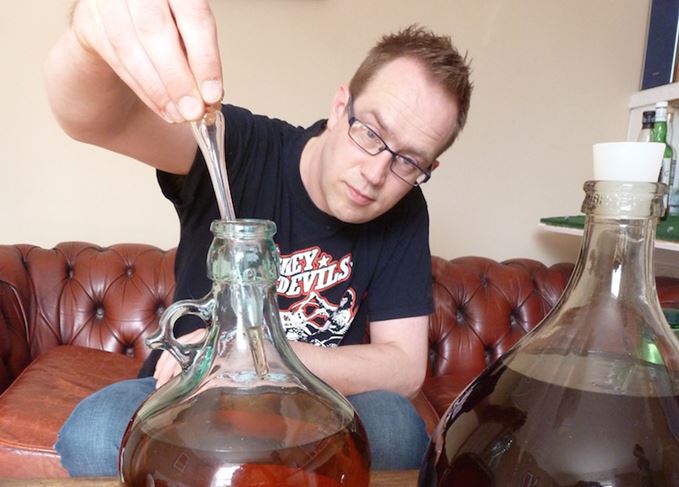 Easy does it: Tim Forbes adds to one of his home-made blends

I got into blending whisky at home by accident. A few years ago, I went through a period of buying several bottles I wasn’t particularly happy with. One in particular was really boring, and even after several attempts I just couldn’t get along with it.

I had been doing a bit of experimental blending of cask samples for The Whisky Exchange at the time, and decided I had nothing to lose by tinkering with my dud bottle.

The principles I followed were not complex or sophisticated. I was starting with a rather bland whisky, so I added something with a lot of character, in this case Ardbeg 10 Year Old.

The result in the glass was good, so I guesstimated the proportions and topped up the dud bottle with more Ardbeg. Suddenly, instead of half a litre of boring whisky, I had a full bottle of whisky I liked.

This was the start of my home blending career, and I’ve never looked back. As the level of what had become my ‘living bottle’ dropped, I experimented with other whiskies, getting further and further from the original dull malt I’d begun with.

Soon I bought a five-litre demijohn, tipped the living bottle in and added the remnants of about 20 bottles I’d got bored with. Now I suddenly found myself with five litres of my own unique blend.

Fast-forward another year, and I’d upgraded to a 10-litre carboy with a dispenser tube, emptied the demijohn into it, topped up what was now the Forbes Heavy Blend with whatever I had to hand, and then begun working again in the demijohn on a separate, rather lighter cuvée which would come to be known as the Forbes Light blend.

Homework: Tim Forbes with the fruit of his blending labours

This one was originally built around Jameson and The Glenlivet 12 year old, and to this day it provides a more subtle counterpoint to the more obvious charms of the Forbes Heavy.

Slightly distressingly, a random combination of both blends – a meta-blend, if you will – has frequently been found to be better than either of its constituent parts, but we’ll gloss over that galling truth.

Home blending has been around for a long time. Indeed, for the British upper classes it was the norm in a golden era that lasted from some time in the 19th century until the Great War.

In Notes On A Cellar Book (1920), the first modern work of alcohol appreciation, the retired academic and bon viveur Prof George Saintsbury describes a simpler time, when a simple letter to a wine merchant – or to the distillery itself if you were close enough – would secure a cask of whisky of whatever age and size suited your needs.

‘The more excellent way... is to establish a cask of whatever size your purse and your cellar will admit... fill it up with good and drinkable whisky from six to eight years old, stand it up on end, tap it halfway down or even a little higher and, when you get to or near to the tap, fill it up again with whisky fit to drink, but not too old.’

In other words, posh people in the 19th century had their own whisky soleras in their cellars. Saintsbury tells of one Highland aristocrat tossing off one of the all-time great whisky humblebrags with magnificent nonchalance:

‘”It should be pretty good,” said a host of mine once [...] “It comes from a hundred-gallon cask, which has never been empty in 100 years.” This is the state of the blessed, to which all cannot attain. But, with care and judgement, it can be approached on quite a modest scale.’

Famously, Saintsbury ‘used to endeavour to supply my cask with, and keep independent jars of, the following: Clyne Lish, Smith’s Glenlivet,... Glen Grant, Talisker and one of the Islay brands’.

Prof George Saintsbury: famous bon viveur (as you can tell...)

These are wise words even today. More recently, the now retired Richard Joynson once had a magnificent Living Cask in his Loch Fyne shop that customers could taste and buy on the spot.

My own blends are unique, and I don’t want to give out any recipes. So there. Besides, what would be the fun of that? Far better that you make your own amazing discoveries (and horrible mistakes) and find your own way.

So, instead, here are my modern dos and don’ts to help you attain your own whisky blending nirvana, Saintsbury-style:

…buy the right size vessel. Too small and you’ll be upgrading in months. Too big and there’ll be too much airspace, meaning evaporation and the loss of volatile alcohols. These changes may improve your blend, but it’s a risk factor outside your control. Make sure you fill at least 70-80% of your vessel in the first month, and keep to that level unless you’re trying to lose alcohol or mellow out your mix.

…have patience. Despite its strength, whisky can be delicate, and throwing lots of different drams together can give an initial impression of chaotic shards of flavour. These volatile liquids need time to harmonise, which is why the resting period of a blend is referred to poetically as ‘marriage’. Don't be disheartened if your blend tastes a bit edgy at first. Within a month or two you might have something more mellow and integrated, so if in doubt, leave it alone.

…go easy on heavy flavours. It’s incredible how much small amounts of a Sherry bomb or phenolic whisky will affect even a large batch. Don’t forget your olfactory epithelium can detect the phenols in a glass of Laphroaig at a concentration of 10 or so parts per million – and that’s ‘heavily peated’. Do as the pros do: use the serious stuff in small quantities as ‘top dressing’ to add complexity to your blend.

…use the good juice. Just because the primary purpose of blended whisky is to bulk out the expensive stuff with filler doesn’t mean you have to be stingy. I’m not suggesting you splash your Black Bowmore in with your Aldi Single Grain, but I’m not above using a very small dram of special whisky if it’s justified in the final assemblage.

…keep it safe. Firstly, keep it away from light and heat – a dark space with minimal temperature fluctuation is best. Secondly, any large vessel of alcohol is a significant fire hazard; and razing your living space to the ground is likely to lead to difficult conversations with your insurance company/better half/pets.

Proof of the pudding and all that. Well, not pudding, but you know what we mean...

…be afraid to experiment. Any mistake can be fixed with the right liquid and a big enough vessel. Even the most exalted master blenders have made more costly and embarrassing cock-ups than you’re ever going to manage, and they’re professionals. The solution, as so often in life, is: Add More Whisky. That’s what the big guys do.

…expect it to be cheap. This is not a cost-cutting (or cost-effective) exercise, it’s an intellectual and spiritual quest for personal whisky perfection. That means cash investment. Whether you’re a blends drinker or not, the stuff on the supermarket shelves is significantly cheaper, much less hassle and, in many cases, better-tasting than anything you can come up. That’s not the point.

…fiddle too much. It takes time for the effects of your tinkering to emerge, so if you keep reacting to initial impressions, you’re likely to find yourself far from where you wanted to be once the whiskies have married properly. And, don’t forget, you’re letting fresh oxygen into your vessel every time the cork comes out.

…expect it to replace your single malt obsession. Your blend is never going to replace your favourite single malt, nor should it. And if you find yourself wondering how your newly-purchased dram will fit into your blend… Well, you might be an amazing blender, but you’re probably buying malts wrong.

…keep it all to yourself. There is no point in doing this if you’re not going to show it off to your mates. Take your blend to parties. Give house guests a bottle to take away with them. Bask in the glory of your blending skills. You don’t have to tell them it was all a massive fluke. Or how the first batch was a disaster and took six months to fix. Or how much the ingredients cost...