How to store Scotch whisky

Where do you keep your Scotch whisky? Cupboard, cellar, purpose-built cabinet? Wherever your prized collection sits, there are plenty of dos and don’ts designed to keep it in pristine condition. Ian Wisniewski ticks them off. 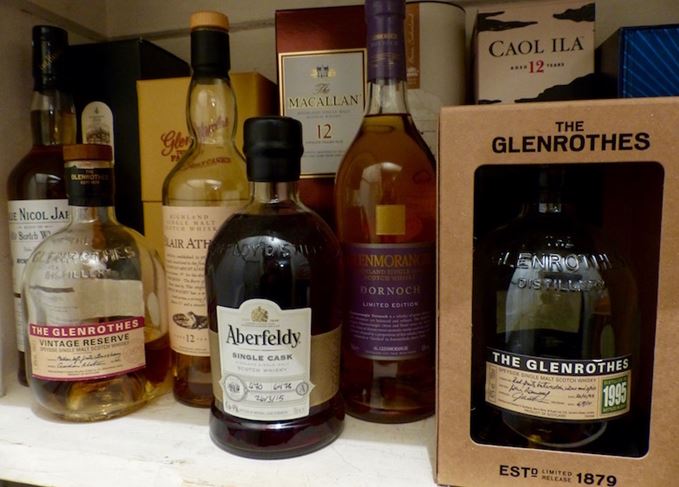 Consider how your whisky is stored if you want to make the most of it.

It’s not easy being in love with Scotch whisky. We have to live our lives with a particular formula in mind: the rate of purchase in relation to the rate of consumption.

If we can maintain an equilibrium between these two rates, there’s no need to worry about running out of space in the cupboard or on the shelf. However, when arrivals exceed departures, the joy of acquiring the next bottle can be compromised by a serious question: where will it go?

Most of us share the same predicament – there’s never enough storage space. And the space that is available also has to fulfill strict requirements.

This includes various practical considerations, to ensure that what’s inside every bottle remains in optimum condition, until the time is right to open it.

Another factor is aesthetics, and displaying a collection in an attractive and logical manner. After all, purchasing Scotch whisky is not all about consumption.

There’s also a visual element, as it’s a joy simply to admire the line-up: the shape of the bottles, the labels, the graphics and the colour of the whisky glimpsed through the glass.

Retailers store their bottles away from direct sunlight to preserve their precious contents.

But first, let’s deal with the practicalities. Vital factors affecting Scotch whisky include the light and temperature: bottles should be stored away from light, particularly direct sunlight, which can have a dramatic impact in a relatively short time.

‘Direct light is one of the most problematic things,’ says Isabel Graham-Yooll, head of spirits at BI Wines & Spirits (formerly known as Bordeaux Index). ‘This can alter the colour of the whisky, and also dull the flavour.

‘During the summer, a bottle exposed to direct light in a window, for example, could show a change within about four to eight weeks. As most bottles are now made of clear glass, to show the colour of the whisky, the whisky is more vulnerable to sunlight than in bottles made of green glass, which were more widely used in the past.

‘The bottle label also fades in direct sunlight, and if looking at the label is part of the enjoyment, then this is another significant change.’

Needless to say, the effect of light is a serious concern for retailers, who need to create an attractive window display that conveys a sense of what lies within – but without compromising any of their stock.

‘I used to work in retail,’ says Graham-Yooll. ‘Shops request dummy bottles so that they can display them in the window long-term, as well as using empty gift boxes. It’s also possible to have shop windows with UV protection.’

Direct sunlight can also, of course, affect the temperature, with the ideal conditions for storing Scotch whisky being cool, stable temperatures (away from the influence of central heating).

One result of higher temperatures is that the whisky expands in the bottle (just as it does when the temperature rises while ageing in the cask). A practical measure to accommodate this expansion is the strategic amount of ‘headspace’ in the bottle (i.e. the gap between the surface of the whisky and the base of the stopper). This allows for a certain expansion without the liquid coming into contact with the stopper. But that also depends on the extent of the heat.

‘Heat can potentially cause the alcohol to expand and push up against the cork stopper, forcing it to rise and damage the foil which encloses the stopper,’ says Doug McIvor, spirits manager, Berry Bros & Rudd.

As spirits manager of Berry Bros. & Rudd, one of Britain's oldest wine and spirits merchants, Doug McIvor knows a thing or two about caring for bottles of Scotch whisky long term.

Another environmental factor to bear in mind is humidity, which can have a significant effect on the exterior of the bottle, including the bottle label and outer layers of packaging (carton, gift box, and so on).

This may sound essentially ‘cosmetic’, but it’s a major concern for any collector wishing to keep a bottle together with all of its matching accessories, and so an important part of keeping the collection in pristine condition.

‘Humidity can affect the bottle label, and any mould developing on the side of the label makes it far less attractive,’ points out Graham-Yooll. ‘Humidity can also affect the exterior packaging, making it more fragile and easier to tear, for example, particularly if opened enthusiastically.’

But, even if bottles are protected from the effect of light, heat and humidity, the contents can still be compromised if the bottle is stored horizontally. Bottles should be stored vertically, to avoid contact between the liquid and the stopper.

‘Liquid contact can potentially deteriorate the cork, and could also lead to cork taint,’ says Graham-Yooll.

Anyone concerned that they may not be able to offer a suitable home to a collection of Scotch whisky can always arrange to have professional storage, which includes a level of security (and they can collect). This option does, of course, come at a price, but then peace of mind also has a high net worth.

THE AESTHETICS OF STORAGE

Now, with the practicalities covered, let’s look at the aesthetics of storage. Whatever the parameters of the collection may be, perhaps focusing on a single distillery, or distilleries that begin with a particular letter of the alphabet, or distilleries located within a particular region, there’s always a way of organising and displaying the collection to the best effect (from youngest to oldest, for example).

Meanwhile, correct storage that safeguards against the effects of light, temperature, humidity, and so on ensures that every bottle remains in an optimum condition, in case it is ever sold or swapped, or even opened to enjoy the contents.

Another practical aspect of storage is suitable insurance to cover the replacement cost of the collection (particularly as values are subject to change, rising as well as falling).

Hopefully there will never be a reason to make a claim. But that’s the whole point of having insurance: it’s just in case.