Peat has been burned by the Scots for centuries, both as fuel and to dry malted barley, but we’re only just beginning to scrape the surface of its smoky secrets. Dave Broom examines how it is cut and used in a distillery, while busting a few myths surrounding PPM and peaty water. 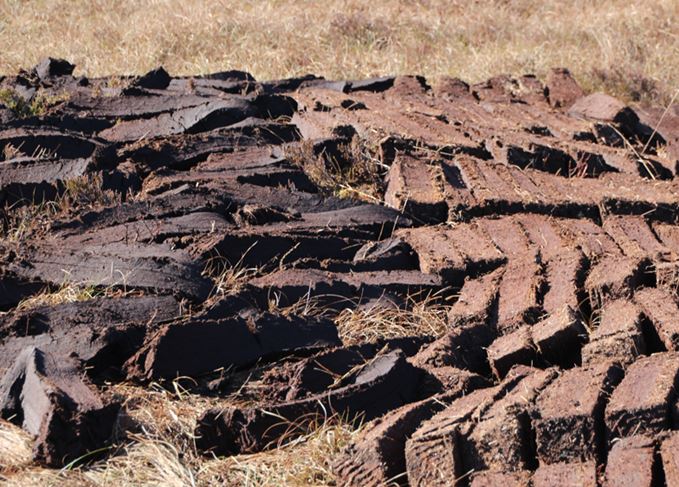 Turf war: Only the right kind of peat can be used to dry barley

Peat was vital to Scotland’s early distillers. Scotland’s terroir meant there were relatively few trees with which to fire their stills and dry their barley. There was no coal or oil. Peat it was and, because peat was used, the resulting spirit was aromatically influenced by it.

How significant peat was can be gleaned from language. The Scots thesaurus, for example, has more terms for rain than it does for sun. This is replicated with peat. Robert Macfarlane’s remarkable book Landmarks starts with a look at A Peat Glossary, itself a list of 120 terms for peat and peat bogs gathered (or cut) by Finlay MacLeod and friends on Lewis.

The depth and precision of the terms reflects the links with man and land: naming, noticing. Peat was part of this world. It warmed and dried, it coloured burns and lochs, its purple, medicinal, woody reek was in the drink and your clothes.

There was a rhythm to that early whisky making. Seed would be sown in early spring, the peats cut and dried in the summer months, then came harvest, followed by distilling in autumn and winter when the water was chill, the beasts could be fed on the draff, and the peats needed to heat home and still.

Peat may have been a necessity to many distillers, but as early as the 17th century it was being used for quality purposes. Here’s Sir Robert Moray’s account of ‘The Making of Malt’ in The Philosophical Transactions of the Royal Society in 1667:

‘The best Fuel [for malting], is peat, the next charcoal, made of pit-coal or cinders... If there be not enough of one kind, burn the best first, for that gives the strongest impression, as to the taste.’

Peat can be divided into two or three parts: when it is cut, the surface vegetation is sliced off and placed on the ground. This allows the roots to bind with the earth, and the peat bank is maintained.

Bricking it: cutting the right kind of peat takes practice and skill​

You then cut one spade length down. This top peat contains fibrous material – small rootlets and twigs which, when dried and lit, give off smoke. Cut down again and the peat is darker. This, when dried, behaves like coal, giving heat and flame. In whisky’s early days, both would have been used, the bottom peat for the hearth and still, the top peat for the smoke.

Today, as other fuels are used in maltings, only the top peat is needed. Maltsters want smoke, not heat. To be specific, they want the chemical compounds within the smoke. These are grouped under a catch-all term – phenols, and are released when the peat is lit to dry the malt in the kiln.

The peat fire is lit at the start of kilning, when the malt has between 15% and 30% moisture as it’s only at this stage of the process that the phenols stick to the surface of the malt. Once the moisture level drops below 15%, any smoke will simply pass across the malt. You’re wasting your peat. Equally, you don’t want flame. It might make for dramatic photos, but a maltster will dampen down a peat fire in order to increase the smoke.

Each distillery will have its own specification as to how peaty it wants its malt to be. In simple terms, the more peat burned in this early stage, the smokier the malt will be. Incidentally, as smokiness is only imparted by phenols released when the peat is burned, we can safely put that old claim that peaty water helps to make a whisky smoky to bed. If that were the case, every cup of tea on Islay would smell like Lapsang Souchong.

How much smoke is generated is down to how well the fire is set, how combustible the peat is, how well it’s drawing, which way the wind is blowing. A distiller will therefore set a measurement of the phenolic parts per million (PPM) it requires in its malt. If a lower amount of peatiness is required in the malt, then heavily peated malt will be blended with unpeated to hit the correct PPM requirement.

The phenols themselves have different aromatic qualities:

Source: The Science and Commerce of Whisky by Ian Buxton and Paul Hughes

These and other aromatic qualities will vary depending on where the peat has been cut and also on how the peat is used in the kiln. Analysis of malt made with the same peat from Laphroaig’s own kiln versus that from Port Ellen shows the former has more cresol and 4-ethyl-guiacol. Taste last year’s Cairdeas to see the difference.

It would be logical to assume that you can measure how smoky a malt is by knowing its PPM level. Sadly, that’s not true. Phenols are lost all the way through the process – in storage, milling, mashing, fermentation and in where the distiller decides to cut from spirit to feints in the second distillation.

Phenols come across late in the spirit run. An early cut will miss some of the heavier, tarrier components, a later cut will include them. Lagavulin and Caol Ila use the same malt, but their perceived smokiness is very different thanks to different fermentation regimes, still shapes and cut points. The spirit is smoky, yes, but the smokiness will vary even though the malt is the same.

Those phenols continue to disappear in maturation, either evaporating to reside with the angels, being absorbed into the wood, or integrated into the spirit.

PPM refers to the malt, not the spirit.

To make matters more confusing, even the measuring of the phenols varies. A colorimetric reading will give a lower figure to that from high performance liquid chromatography (HPLC), one reason why some producers’ PPM levels can be twice that of their competitors. Measuring phenols doesn’t necessarily give a complete understanding of the aroma of the spirit. Some phenols might be there in high levels, but be aromatically invisible.

There is still a huge amount of research needed on peat – what aromas come from specific areas, how different kilning regimes can help promote specific phenols, how to amplify the terroir. Kilchoman is embarking on this, and hopefully Bruichladdich will start to, finally, use Islay peat in its investigations. Peat has been an integral part of whisky for hundreds of years, an emotional tie to land, past, and culture.

Discover more about peat terroir and its impact on flavour in the first part of Dave Broom's peat special.