How to spot fake spirits in Russia

In the wake of the Krasnoyarsk mass poisoning in which up to 30 people died, just how big a problem does Russia have with fake spirits products? And how can consumers tell the genuine article from a potentially deadly copy? Erkin Tuzmekhamedov reports. 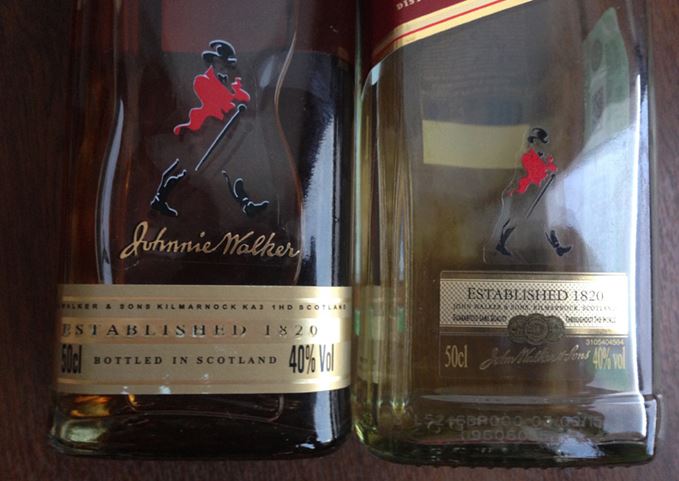 Labels, bottles and caps can be bought on the internet, filled with coloured ethanol and sold to unsuspecting consumers, and even businesses, for a hefty mark-up.

Following the deaths of up to 30 people in Siberia from drinking fake Jack Daniel’s bought on the internet, what is the scale of Russia’s black market in counterfeit whisky, Cognac and other spirits products?

According to estimates, there are anything from 2,000 to 5,000 deaths from drinking fake spirits or surrogate alcohol in Russia every year. Counterfeit western spirits account for just a small fraction of this number.

According to government statistics agency RosStat, 40m litres of whisky were imported into Russia in 2014, most of it Scotch. Over the same timescale, some 55m litres were sold legally, leaving a 15m-litre gap between what was brought into the country, and what was eventually sold. This figure does not include internet sales.

Vadim Drobiz, head of CIFFRA, the Centre for Studies of the Federal Alcohol Market, puts the fakes’ share of the overall imported spirits market at about 20%, and in some leading brands it could be even higher.

According to Drobiz, this is the reason why Scotch whisky imports in Russia declined 5% in 2015, the first fall in a decade.

An internal police report for Russia’s Northwestern region, leaked to the Press two years ago, estimated the number of small, illegal garage-type bootleggers at 500-1,000 in that region alone.

The business model is simple: buy labels, bottles, caps and excise stamps on the internet from a ‘reliable’ source; mix ethanol with water, and add colouring on the spot, in your garage. No need to transport fake long distances – business can be done locally.

Beware of more premium brands bottled in 50cl bottles, like Chivas Regal 18 Year Old – the likliehood is that they are not the real deal.

The fake spirits business has been flourishing in Russia for many years now, but it seldom becomes front page national news, because when done ‘right’ (with ethanol as a base spirit), nobody is poisoned. This is why the Krasnoyarsk case became news.

The business is known and monitored by the police, who have a special department, equipped with a laboratory to study fakes. But most of the time it’s a question of intellectual property infringement, not lethal poisoning.

A few years ago, you could buy fake alcohol via a chain of garages in five-litre plastic canisters: you find a local supplier, call him, and somebody will bring you a selection of whisky/rum/Tequila/Cognac in the boot of their car.

Again, since nobody was poisoned, not much fuss was made of this market in so-called ‘elite spirits’, sold in canisters and a mixture of ethanol with colouring and aromatics. Many student parties, and even some bars, were known to use this.

A basic bottle form costs around €10,000 (you pay it once, then you can order any run you want). Labels are easier and cheaper. Excise stamps seem to be more of a problem, but take a short surf on the internet and you get an offer to buy them at RUB3 ($0.05) per stamp if you order 50,000 copies. That’s the scale of the problem – 50,000 stamps as a minimum order.

The cost of producing a fake bottle of alcohol is comparable to that of a legally produced vodka. A half-litre bottle of vodka costs around RUB20 to produce, including simple bottle, cap and label.

The government regulates the minimum price of vodka at RUB200 (50cl bottle). A high price for a population that lives in poverty. So a lot of people prefer to buy illegal vodka.

That was always the explanation for the high levels of counterfeit vodka – and very often it is real vodka, bottled in legal plants – but during the night shift and without paying tax. CIFFRA estimates that up to 50% of vodka in Russia is illegal.

However, the margins on illegal vodka are relatively small, because you have to sell it for half the price (or less) of the legal equivalent. But move into faking imported alcohol and it’s a different world.

The cheapest genuine half-litre bottle of Jack Daniel’s is about RUB1,000, while the cost of all packaging components and ethanol for a fake version is probably less than RUB100. And you can sell it for RUB400-600.

Leonid Raphaelov, head of AST Ltd, the biggest wine and spirits distributor in the Moscow region, told me three years ago that someone approached him with an offer to buy a shipment of Johnnie Walker Blue label for RUB165 (US$5 at the time). But the bottles were… 50cl. And it was a serious business offer. Leonid declined, but what about the many small and murky distributors?

Surf chats and forums, and you can come across offers like this: ‘Sell Johnnie Walker Blue label by the bottle, RUB700 per bottle. We bought four cases for a wedding, and I have a few bottles left…’ A wedding with four cases of JW Blue? Is Abramovich getting married again?

Grigori Pogosyan, a well-known radio-TV journalist and a good friend of mine, asked for help last summer: a manager at one of the major oil companies was turning 38, and their Armenian circle wanted to give him a bottle of Chivas Regal 38-year-old as a birthday present. Someone offered them a bottle for RUB25,000, but they were looking for a better deal.

I had to disappoint him that Chivas never bottles 38yo in half-litre bottles. Imagine such a nice margin? To sell a fake that costs RUR100 for RUR25,000?

EPILOGUE: Back to Krasnoyarsk

Right after the Krasnoyarsk mass poisoning, the police closed down hundreds of websites selling alcohol. If you search the web with the term ‘buy Jack Daniel’s whisky’, you will find most of the links closed.

Nobody put forward any conspiracy theory in relation to the poisoning, but there had been numerous appeals by the government in the past few years to ban internet alcohol sales (claiming – and in many cases rightfully so – that uncontrolled internet sales boost fakes/surrogate alcohol sales).

However, there was never broad support for this, because most importers and distributors had their legal internet sales departments. Now it has been done without any debate at all.

Telling fact from fiction
So what did I say in my TV interviews on how to tell a real bottle from a fake?
Bottles: You run a very high risk with 50cl bottles. They could be real in the case of ordinary whiskies, standard Scotch blends, US or Irish whiskies and VS Cognacs, but never for higher categories: JW Blue, Chivas 18 years and higher, XO Cognacs.
As I understand it, Russian chains pressed local representatives of western companies to add half-litre skus for the most popular brands, because traditionally that’s the most popular size here. Most vodka bottling plants have half-litre lines – so, if you make fakes on a large scale, it’s easier to use vodka lines for bottling.
If you know the quality of the original bottle, it’s easy to tell a fake – local bottles used for fakes are lower-grade glass, not perfectly polished and often lighter than the original.
Labels: High-quality print is not a problem nowadays, but still you can find a difference – some avoid cut-outs or embossing, which are visible on legal examples. A legal Jack Daniel’s label has some cut-out elements, with a visible shape bordered on the sides of the labels. No Russian fakes have these, although the print is of good quality.
Caps and closures: Higher-grade Cognacs and whiskies often use metallised caps, while all Russian fakes use ordinary thermocaps. The closures on standard products can be easily imitated, but on higher grades, where the caps are a costly combination of corks and metal/plastic… nobody bothers to go to the expense.
Excise stamps: A trained eye will tell the difference right away – legal ones have a metal line that’s inside the print, and not glued over, and they have small, hair-like inclusions similar to those in a dollar note, and all the letters and numbers are easily readable, unlike those on fakes.
What’s inside: Well… if you open a fake bottle, you will know right away that it’s not a whisky/Cognac/rum/Tequila in your glass. It smells of vodka and, in the case of brown spirits, it’s the colour of a sad, yesterday’s teabag brewed one more time.