Anthony Wills risked everything to build a small farm distillery on Islay, but 10 years on he tells Becky Paskin how Kilchoman has become bigger and stronger than he ever hoped. 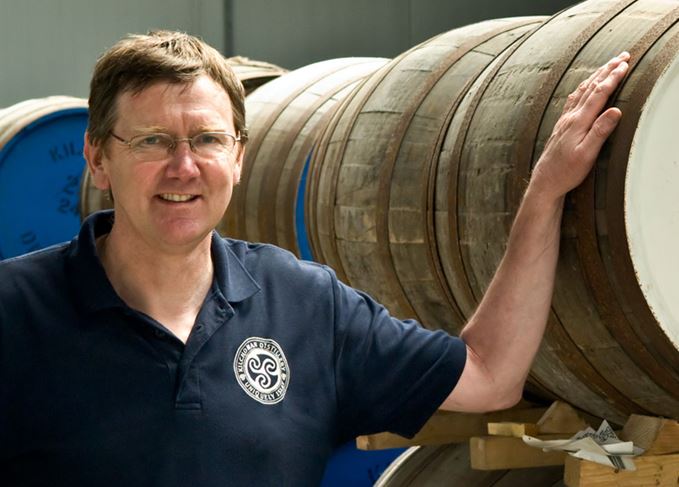 ‘I never imagined that 10 years after starting Kilchoman people would be talking about a product from a distillery that I built, that is around the world in bars and clubs, and people are writing nice things about. That is hugely satisfying and I feel incredibly proud.

‘I risked a huge amount when I started because I put all my money in, all of it, and more. It concentrates the mind hugely when you do that and we never raised anything close to what we needed because no one was interested in investing in something that was so high risk.

‘I knew no one had built a distillery on Islay for 120 years but I didn’t really do any research; if I had I wouldn’t have bloody done it. If I’d spoken with my accountant he’d have said I was mad and forget it because it’s not a model that anyone’s going to invest in, and he would have been right. It took me four years to raise the initial funds because none of the financial houses would look at it with a barge pole.

‘Eventually I raised small amounts of money from a few wealthy individuals, for whom, at that point, 40% tax relief was still useful. They thought the idea was completely mad, but a bit of fun. They didn’t think it was a serious investment but were prepared to give it a go. They probably thought I would lose their money.

‘I had to take huge dilution to raise extra money but I have no intention of selling up and moving on – I’ve worked too hard to get this business where it is. As a family we have a reasonable stake in the business, but no one holds the majority. I’m very lucky to have very supportive director-shareholders who know that I’ve got the business where it is and that I’m pretty important to it, but then no one’s indispensable.

‘My own view, and I’m not trying to be smug or arrogant, is that the time has passed for new distilleries. Unless you have whisky experience and have knowledge of taking your product to market, you’re going to struggle like hell.

‘If you've worked out you need £5m, you actually need £10m. And you’ll need it all. Maybe costing things now are a bit easier than it was in my day because I didn’t have any distilleries to benchmark against. Now you can come to me or a few other distilleries and get a closer idea of the cost. I didn’t have that luxury.

‘I get enquiries every week of the year from people who want to chat with me to find out what I did and give them some advice, and I’ve done that freely. I’ve talked to various people and I know the ones who have a chance and the ones who will fall absolutely flat on their faces.

‘The last 10 years haven’t been easy for us. In 2006 we burned the kiln down. Luckily it didn’t do any damage, but we were out of production for our own malt for a year. We had awful problems – boilers breaking down, steam pipes bursting every five minutes – we had huge issues and I could write a book about what not to do when building a distillery. I can look back and laugh about it now but I wouldn’t have done five years ago; I would have been crying.

‘We are looking to expand slowly as the demand increases. We just put in two new washbacks that will take us from 160,000 litres [pure alcohol] this year to 200,000 litres in 2016. What we are not going to do is put in more stills. My belief is that Kilchoman's character as a farm distillery is pretty unique – you start putting in more stills and you start losing that marketing angle.

‘Every time we increase production it’s to the detriment of our 100% Islay product, which accounts for less than 17% of sales now. The idea is to get that back up closer to 30%, so we’re building a new malt floor, kiln, and growing more barley on the farm. We can do that now because we’re in charge; we’re the farmer.

‘It was common knowledge we didn’t see eye-to-eye with the landowner, which was a shame. He was a friend of mine and when you go into business with friends it doesn’t always work. So when the opportunity came along this summer to purchase the land, it was crazy not to look at it. Yes we paid a premium but we always knew we were going to and it secures the future of the business. And we can now expand; we can do things we weren’t able to do before and it gives us a whole new perspective on the business.

‘Making the decision to build the distillery on Islay was the most important I’ve made because Kilchoman’s success is very much down to where the distillery is, the provenance, tradition and history of the region. Plonking a distillery in Glasgow or wherever in Scotland that doesn’t have a heritage and tradition of distilling makes it more difficult.

‘Global demand for peated whisky is very good. Distillers on Islay are focusing on peated products more now than they used to but it’s much more balanced as well; the peat isn’t dominating and that’s because we’re better at cask maturation than we were and the distilling processes are far better now than they used to be.

‘It’s not that I’m not a fan of cask finishing, but we don’t want to follow what everyone else does. We’d rather be different and unique, and tell a different story, so we’re going to look at full maturation in Cognac, Port, Madeira, sauternes, rum casks and others when we can find them.

‘Our distillery manager, John McClelland, has prostate cancer and has been off work for 20 months now. We’re supporting him as much as possible, and if he can come back and help us in any way for short periods of time we’d be happy to have him, but so far it’s not been possible.

‘In John’s absence I’ve now taken over responsibility for selecting the casks we use in vattings, although we’d like to have someone else join the company who has experience and who we can rely on.

'Now we're 10 years in I’m certainly not thinking I’ve done the job and I can now sit back and relax – I’m driven to take Kilchoman to the next stage.'