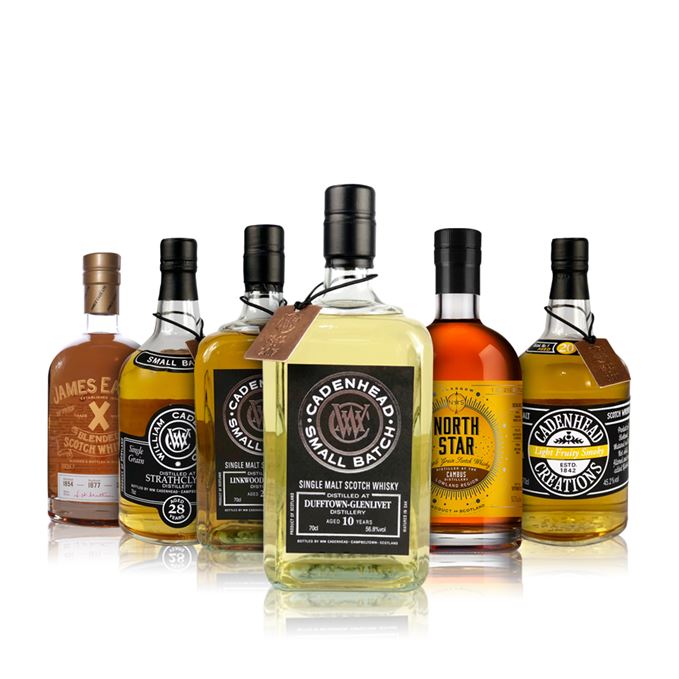 There’s a little bit of everything in this week’s round-up of new whiskies: two single grains, a couple of single malts, a blend and a blended malt – plus liquid from a pair of lost distilleries.

We begin with a 20-year-old blended malt made under the ‘Cadenhead Creations’ banner, which intriguingly combines Springbank, Longrow, Tobermory, Glen Moray and Glen Garioch. It’s softly smoky and warmly comforting. ‘What’s not to like?’ asks Dave Broom.

Next comes the first of two appearances this week from closed grain distillery Cambus, in the shape of a 24-year-old bottling from North Star Spirits. It recovers from a poor start to win Broom over with its ‘exotic, cask-driven’ flavours.

Chilly days at Wimbledon are brought to mind by our next whisky, another Cadenhead bottling of single malt Dufftown. Broom eventually concedes that it’s pleasant enough, but signs off with a slightly dismissive ‘meh’.

Our blend is the revived James Eadie Trade Mark X, resurrected 70 years after it was discontinued. First made in 1854 and registered in 1877, the modern incarnation is based on detailed research by Eadie’s great-great-grandson, Rupert Patrick.

It’s a blend of the 12 whiskies listed in Eadie’s Victorian ledgers and still in production today – including Caol Ila, Lagavulin, Craigellachie and Aberlour – as well as liquid from lost distilleries Cambus and Littlemill. Richard Woodard takes on tasting duties for this one – and, according to him, it’s a triumph.

While the Eadie is a robust, smoky dram, our next whisky is anything but. Cadenhead’s Linkwood 24 Years Old is a shy, subtle single malt that, says Broom, is all too easily overlooked. It also puts him in mind of a classic chocolate commercial.

We close this week with another aged grain, this time from Strathclyde and strictly for those with a sweet tooth. In Broom’s words, it’s a whisky that goes straight into the arteries – and leaves him sadly unable to partake in any adventurous activities in sand dunes.

Batch 132 26/01/2018 Three Irish whiskeys this week, plus the return of Crabbie’s to Scotch and an Islay single malt.