The French have a word for it: that elusive, funky, complex scent that appears in Cognacs after long aging: rancio. But does it also occur in Scotch whisky? And is it a relic of the past, or something that distillers can try to engineer in the future? Dave Broom reports. 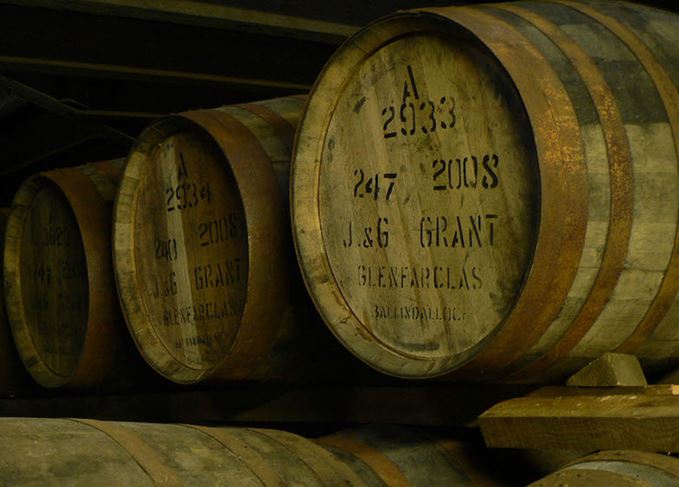 This is an edited version of a presentation given by Dave Broom, Ryan Chetiyawardana and Arielle Johnson at Tales of the Cocktail, New Orleans, on 22 July 2016. Arielle also discussed elusive flavours in food, while Ryan used insights to create new drinks. A separate piece on these findings will appear on Scotchwhisky.com soon.

It’s the aroma of overripe fruit, a country house, oiled/waxed leather, ambergris, musk, mushrooms, blue cheese. Aromas which are slightly ‘off’, slightly gamey and high, that speak of decay and are yet also sweet.

The French had a word for it, this enigmatic and prized aroma which appeared in Cognac after a long period of maturation and, perhaps because there was no English equivalent, it was widely held that it was a purely French phenomenon.

Yet, after becoming familiar with rancio-affected Cognac, it was an aroma which many of us also picked up in whisky. It encompasses the tropical fruit you see in old Bowmore, a collection of elusive, enigmatic aromas which were not there at distillation stage, and that only appear, after time, in some examples of that distillery’s mature spirit.

It is also an aroma that Ryan Chetiyawardana and I have become increasingly obsessed with, to the extent that, knowing nothing about the subject – other than that we were intrigued by it – we decided to present a class dedicated to rancio at Tales of the Cocktail.

The more you look, the more it permeates other areas. For the presentation we turned to Arielle Johnson, who is head of research at the groundbreaking MAD in Copenhagen, to help us get our heads around the concept.

‘Talking about rancio links us up to new ideas we’re using to cook more creatively,’ she explains. ‘Cooking and food processes ask the question: are you capturing flavour or transforming it? Composing ingredients, extractions and distilling are (mostly) about flavour capture, but elusive flavours like rancio and what we can develop from long-term fermentation in products like miso are, on a molecular level, the result of transformation.

‘In other words, you’re creating new molecules. And this requires, and inspires, a different kind of thinking than we as cooks and bartenders are usually used to.’ And whisky makers as well.

Rancio underlines how every part of the whisky-making process is interdependent and how, in some cases, aromas/flavours exist in a half-formed state, waiting to be triggered if the conditions are right.

Rancio lurks in the shadows; it’s there, but not there. As Arielle says: ‘Each step yields precursors for the next step, where their full potential is eventually realised.’

You want the science? It seems to be produced by compounds called methylketones, in particular 2-heptanone, 2-nonanone, 2-undecanone and 2-tridecanone, of which the first two are in the highest concentration.

Esters – those compounds which are created when an acid meets alcohol – are also involved. Esters, in a word, are fruity. Some of them can then be further changed into fatty acids during a long fermentation regime. There is no rancio yet, however, just the potential for it to form.

I took some of the (relatively few) papers on rancio to Keith Law, one of the blending team at Diageo. He hadn’t come across the term, but knew the aromatic markers for it – and is also also fascinated by the world of esters and tropical fruit.

Mysteries of age: Rancio has been observed in some long-matured Bowmores

‘There could be another element,’ he suggests, ‘which comes through a “browning effect” of proteins in the wash still. The ketones which work with the amino acids help give “maltiness”, which is formed when the amino acids get heated, causing this browning reaction.

‘They aren’t found at the same levels as in Cognac, but they are there, which means that rancio/tropical fruit can be created.’

What’s also clear is that rancio needs time and specific types of cask. In Cognac, producers age first in new oak for a short time to build the tannic structure and add flavours such as vanilla.

Then they transfer the Cognac to old casks for a more oxidative-driven, long-term maturation. These are the conditions in which the precursors – the fatty acids, the ketones – can finally be triggered.

Anecdotally, it’s been realised that all of the rancio/tropical fruit whiskies have been aged in excess of 20 years in refill casks – in fact, in almost knackered casks where you get low wood impact, but high levels of oxidation.

In Cognac, casks intended to create rancio effect are aged in damp, humid cellars. In Scotland, as Keith Law says: ‘Another aroma considered to be rancio is what we’d call the “dunnage warehouse” smell (mushroom, fungal). You tend to only get that in old-style warehousing.’

What is clear is that rancio cannot be rushed. Our friend 2-heptanone evaporates very slowly, which in turn also means it becomes more concentrated. Over time, ethanol has gone, water has gone, the volatile aromas have flown off, leaving leaving what has lain beneath – rancio.

So, is there rancio in whisky? ‘I think we can say it is caused by the same chemical reactions,’ says Law, ‘but that it might manifest itself in a different fashion because the raw materials – yeast, distillation, maturation regime and conditions – are all different. It is happening in Scotch, but at a subdued level.’

It is also rare. Rancio only emerges after time. It only is produced under specific circumstances, as a result of a chain of interlinked events.

As a result of this, you only find it is some old single malts, some of which Diageo uses for its top-end Johnnie Walker range such as the ‘study in fruit’ that was Private Reserve 2015, or the rancio-affected whiskies which form part of the fruited layers in Blue Label, King George V and The John Walker. Rancio gives depth, adds mystery and fruit, while also remaining enigmatic and elusive.

Scotch differs from Cognac insofar as it has never deliberately sought to create rancio, whereas in Cognac it is deliberately planned. ‘It’s a layer of complexity we recognise, but we don’t dial it up,’ says Law. ‘Rather, it is the legacy of what we have made.’

This also raises the question of whether rancio could be something which has ceased to exist? Have the conditions conducive to the creation of rancio now changed so fundamentally that it is an aroma from whisky’s past?

If it was never flagged up, could we be dealing with a a finite and diminishing resource? Is it possible that, just as people are becoming interested in whisky rancio, it disappears?

It was with some trepidation that I asked Keith Law whether, now that we know what whisky rancio is, we can deliberately create it? His reply: ‘Yes, I think we can.’

Rather than this being a completely new area for Scotch, it is actually an old area which has not really been considered, and is now opening up into a new area for exploration.

‘We understand new make, we now have a good handle on maturation, but there is still this question mark about what happens in the middle,’ says Law, ‘and there are these increasingly interesting things like this tropical fruit which slowly start to reveal themselves.’

No-one knows everything about whisky. Rancio takes us into a world of rarity. It helps us gain an even deeper understanding of Scotch, while always remaining elusive.