A Sutherland distillery in its namesake town that ran from 1825-40 under three licensees.

Although many distilleries were established in neighbouring Caithness, Sutherland had relatively few, by far the best-known being Brora, or Clynelish which is still distilling today.

It’s difficult to accurately locate where Helmsdale distillery stood. Logically (and from its rough OS coordinates) it sat on the east bank of the Helmsdale River, but it is risky to be more precise than that. It is possible the distillery used coal from the Brora mine, 15 miles to the south, but the difficulty in transporting it at the time means locally-dug peat was probably used. 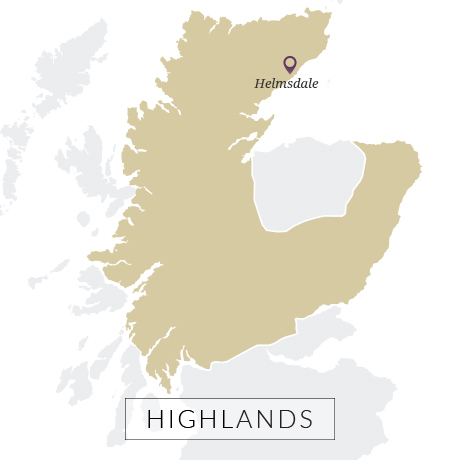 Helmsdale distillery was first licensed to A & D Simpson in 1825, which ran the site until 1831. The company changed to Alexander Simpson & Co., which continued to operate Helmsdale until 1837, when it seems to have lain unused for a short period. The site was eventually licensed to James Christie & Co., which was sequestrated in 1840 and the distillery was closed and dismantled.