At one time one of the most northerly distilleries on the Scottish mainland.

No prizes for guessing where John O’Groats distillery stood. Distilling in Caithness was widespread for centuries, although nearly all distilleries eventually vanished and for decades the only survivor was Pulteney in Wick. However, it has now been joined by resurrected Wolfburn at Thurso and Dunnet Bay, a small distillery producing Rock Rose gin.

John O’Groats is in fact quite a scattered community with many houses, farms, crofts and agricultural buildings dotting the landscape just south of Duncansby Head. There’s also quite a network of burns and watercourses feeding in to the Burn of Duncansby. Pinpointing the location of John O’Groats distillery is therefore difficult. 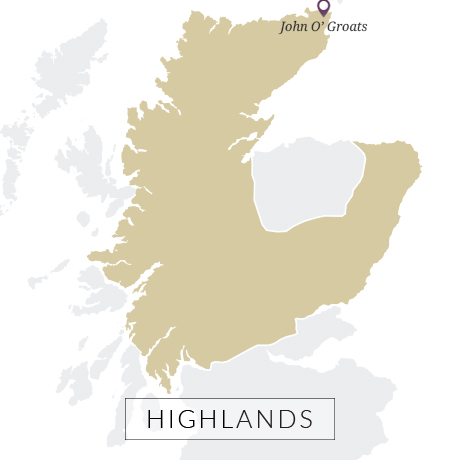 John O’Groats distillery was run for the most part by members of the Sutherland family, a name that often crops up in connection with many northern distilleries.

It was first licensed in 1826 to J & G Sutherland, which continued operation through until 1834. Then in 1837, John & George Sutherland, possibly the same two distillers, re-opened John O’Groats, but it closed again before the year was out.