A 19th century distillery that was once located in its namesake village in Perthshire.

The village of Sheriffmuir plays its own role in history as the location of the final battle in the first Jacobite Rebellion. It was during this battle that the followers of the ‘Old Pretender’, who would have been James III of England and James VIII of Scotland had he succeeded, were defeated in 1715.

James’s son, Bonnie Prince Charlie, the ‘Young Pretender’, took up the cause 30 years later but, after initial success, was defeated at Culloden Moor in 1746.

Sheriffmuir distillery, built in the early 1800s, was likely situated at or near Shirramuir House and Sheriffmuir Inn, both about two miles east of Dunblane. However, historical information about its location and set-up is scarce and vague. 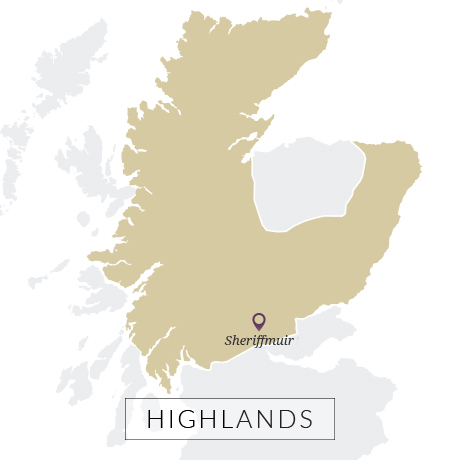 Sheriffmuir distillery opened in the early 1820s under license to Forrester & Buchanan. The pair ran the site until they were sequestrated in 1825.

The following year ownership moved to Alexander Munnoch, who himself lasted only 12 months or so. By 1827 Sheriffmuir’s license was in the hands of Andrew Bannerman, who ran the distillery for three years before shutting up shop.