Thanks to an 1886 visit to the Campbeltown distillery by the historian Alfred Barnard, some information about Springside distillery is available.

Back then, whisky did not legally have to mature for three years so warehouse storage could be smaller.

Mains water from Crosshills reservoir was used throughout the complex.

Annual output was small at 30,000 gallons (136,000 litres) per year, which was sold as Campbeltown malt to Glasgow and further afield for blending. 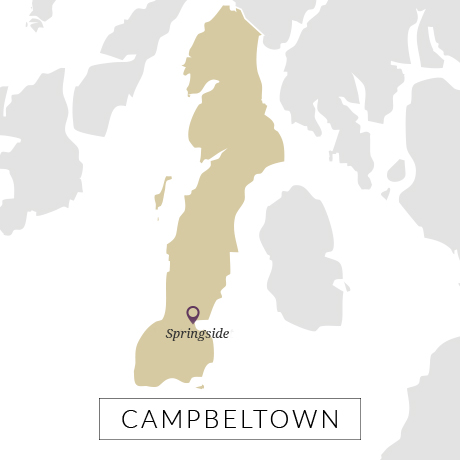 Springside’s early history is hazy, with conflicting sources showing the distillery licensed to Colvill, Beith & Co. in 1827 but built in 1830. From 1833-52 it is not even clear whether the site was active. From 1852, Springside was operated by the Colvill family who would distil there for three generations.

Springside succumbed in the Scotch industry’s nadir years, when US Prohibition and soaring taxation on spirits drove countless distilleries to close, the majority never to re-open.

In the 1990s, one warehouse wall with barred windows still remained, a relic of the long-lost distillery.