Short lived and long demolished distillery at Crieff in Perthshire.

Turret Bank distillery was located on the west side of Crieff on a meander in the Turret Burn. The site was built just over a mile downstream from Hosh distillery, today known as Glenturret. 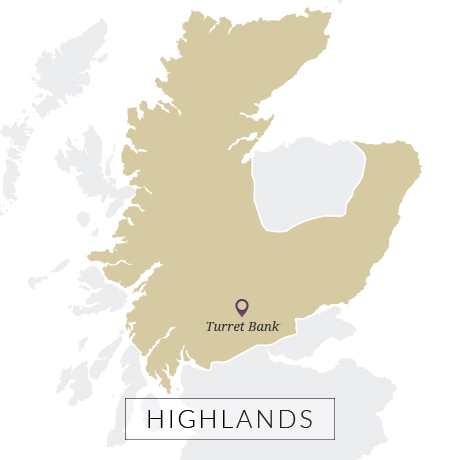 Though Turret Bank was only active for 10 years it operated under four successive licensees. The distillery was opened by William Johnstone in 1827, before being licensed to Drysdale, Johnstone & Co. in 1829. Operation passed to Lawrence Drysdale in 1831, and finally to William Hamilton in 1837. Shortly after Hamilton took control, Turret Bank ceased to operate as a distillery.

Today the building itself is long gone – its site opposite Crieff’s Macrosty Park is now occupied by housing – but the name of the distillery lives on in the local area having been lent to Turretbank Road, Place, and Drive. A little way up Turret Burn the remains of the mill lade that supplied the distillery can still be found.