Micro-distillery built at Lagavulin with one of the most enigmatic tales in Scotch whisky history.

One of the more colourful lost distilleries, Malt Mill produced a peated whisky that contributed to some of Mackie & Co., and White Horse Distillers’ blends, including White Horse and Mackie’s Ancient Scotch.

Malt Mill shared Lagavulin’s mash tun, but has two washbacks and two pear-shaped stills of its own, modelled after those at Laphroaig. 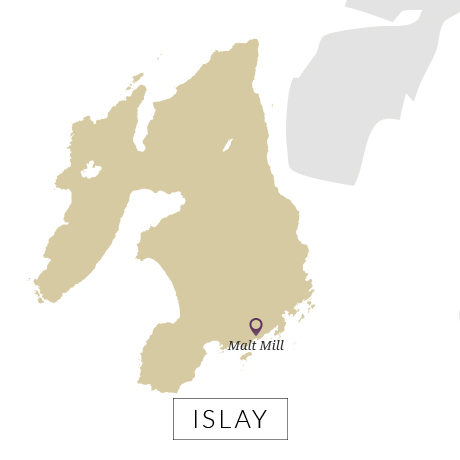 Malt Mill was born in 1908 from an acrimonious falling out between the owners of Lagavulin and Laphroaig.

At the start of the 20th century Lagavulin owner Peter Mackie was also agent for neighbouring distillery Laphroaig though his company, Mackie & Co. The commercial agreement stayed in place for many decades, however, the death of Laphroaig owner Alex Johnston in 1907 brought his nephew, Ian Hunter, to the island.

Hunter, a newly qualified engineer, was disappointed by the state of the agency agreement. He felt Laphroaig was not getting the best returns since Mackie was demanding most of the distillery’s output for its own blends. What ensued was a bitter court case, in which Mackie lost the right to represent Laphroaig.

So enraged, Mackie went so far as to block Laphroaig’s water supply, which resulted in a second court case to get it restored.

Ultimately, Mackie built a replica of Laphroaig distillery within Lagavulin called Malt Mill, and even pinched Laphroaig’s head brewer to ensure the spirit produced was exactly the same as his neighbour’s. Of course it wasn’t. It wasn’t Lagavulin either.

Malt Mill’s whisky was used as a contribution to the company’s blends, most notably White Horse and Mackie’s Ancient Scotch, which featured the name of the distillery on the label. It was never – as far as historians know – bottled as a single malt.

The distillery was eventually closed in 1962, its equipment incorporated into Lagavulin.

The last remaining monuments of the distillery are its maltings, which shut in 1974 and were converted into a reception centre for VIP visitors, and one solitary sample bottle of new make spirit from Malt Mill’s last spirit run. It is currently on display in Lagavulin’s visitor centre.