Now in its second year, the Whiskybase Gathering in Rotterdam has already developed its own distinctive feel. It also showcases the evolving ways in which people are finding out and sharing information about their whisky experiences, as Angus MacRaild discovers. 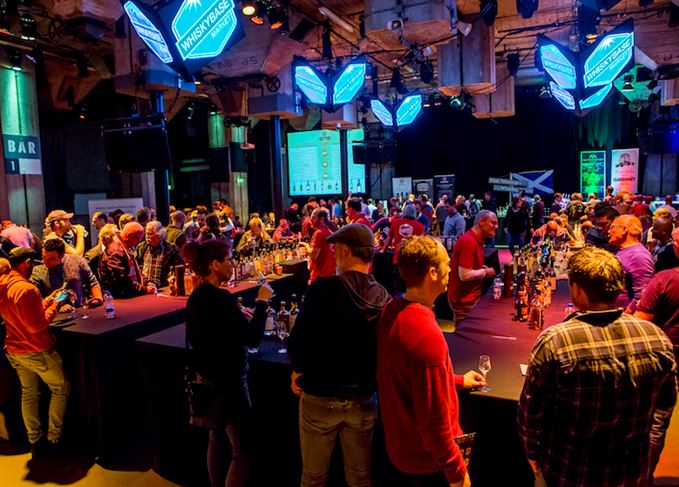 One of the most impressive things about the Whiskybase Gathering – now in its second year – is that it already has its own feel. All the best whisky festivals have their own sense of identity: in the sorts of crowds they attract; the atmosphere they generate; in the combinations or selections of whiskies and events on offer.

Limburg has its own, somewhat gargantuan, sprawling identity, just as smaller events such as Dramboree have theirs. Whiskybase has clearly worked hard in a short space of time to carve out its own character.

No mean feat in a small country like the Netherlands already brimming with other whisky festivals. This, however, is mainland Europe, and in fine tradition of European whisky geekery, visitors will travel from far-flung corners if there’s a good few drams on the table.

The event took place again in the Maassilo, a 100-year-old grain silo in the docklands to the south of Rotterdam – a cavernous and industrial venue with appropriately mighty grain bins looming out of the ceiling, and the kind of rough-and-ready architectural re-purposing the Dutch have made into something of an urban art form.

Exhibitors are lined around the rooms on slightly too wide black cloth tables, which makes interaction between exhibitor and visitor a tad strained at times, but it’s a minor quibble in what is otherwise an extremely well-organised and thought-out space.

One of the key issues at whisky shows after more than a decade of their widespread popularisation is ‘space management’. Simple things such as room to sit down with your drams and pals and taste with a little more ease have become common points of frustration.

Big draw: Determined dram hunters will travel from afar to attend events like the Gathering

One of this show’s strengths is its clear determination to address this issue and give people room to breath and space to sit, eat and dram – rather than being squashed together, oxter to oxter, with some similarly sweaty stranger.

It is not, however, the layout of the show which sets it apart so much as the very specific community feel that Whiskybase itself brings to the event. The nature of Whiskybase as a broad community platform – where members can create a kind of online avatar of their collections, connect with fellow whisky lovers, swap and sell bottles and access info about bottlers, brands and distilleries – is what underpins the Gathering.

Prior to the event, attendees can browse an (almost) complete selection of the whiskies which will be available to buy at the show. From this they can compile a ‘shopping list’ and rate the whiskies live during the festival.

There were display screens showing the scores coming in for the various whiskies and ranking the top whiskies at the show. As event organiser Dirk Henst says: ‘The use of the voting system during the Gathering and the pre-selection people made before the event was much higher than last year.

Personal space: The event has tried to provide room for people to sit, chat and dram together

It’s something which is, so far, unique to the Whiskybase Gathering and is obviously becoming an increasingly powerful platform and tool. People are integrating online data and communities into their social whisky experiences, whether it’s feeling part of a community by contributing to the expansion of a common pool of information or using that information to inform the way they engage and behave.

With thousands of new whiskies appearing each year, on top of almost endless archived releases which still appear at these festivals, it’s little wonder the broader whisky community is evolving in this way. At the Gathering you can see this phenomenon in the sharpest of detail.

There is also a sense of the increasing prevalence of scoring whisky as a means of communicating personal impressions about it. Seeing the scores come in live throughout the festival and then hearing that feed into the conversations around the exhibitor stands and tables, you get the sense that this aspect of the ‘language’ of whisky is becoming more mature and complex.

The way whiskies are categorised, evaluated, discussed and then the way that information is shared and accumulated is, to a certain degree, in flux. It’s another aspect of modern whisky culture which is already prevalent, but by placing the screens and connectivity physically in the room and making it an explicit and central part of the festival, the relevance is there for all to see.

Traditional pour: But whisky experiences are being shared virtually as well these days

The one aspect of the Gathering which feels somewhat frustrating is that it is only one day. With the number of whiskies on offer, you feel that a longer show over two sessions would be better. There are mutterings among the Whiskybase team of expanding the show to run over a full weekend next year.

This is not to say the event lacks a ‘festival’ feel, however. The main show is bookended by events before and after at different locations, such as the bring-a-bottle event on the Friday night, followed by a dinner, and another, similar bottle sharing event on the Saturday night after the show.

These events both work well as a way to expand the show slightly and take advantage of the differing parts of Rotterdam and some of its excellent beer bars. I had not fully appreciated before just quite what a modern and varied architectural sprawl Rotterdam is.

The grungy feel of its docklands is well juxtaposed with the jutting lights of its commercial and transport centres. The modernity of it all is well suited to the Gathering, an aptly named festival which certainly feels like one of the most cutting-edge whisky festivals out there.

Not just in terms of what it offers attendees, but more how it offers these whiskies and experiences. It’s hard to imagine it not growing to new heights again next year.