For the first time, the Whiskybase Gathering in the Netherlands (20-21 October) was held over a full weekend. Bigger and more international than ever, the festival has become a reflection of the growing popularity of whisky collecting. Thijs Klaverstijn reports. 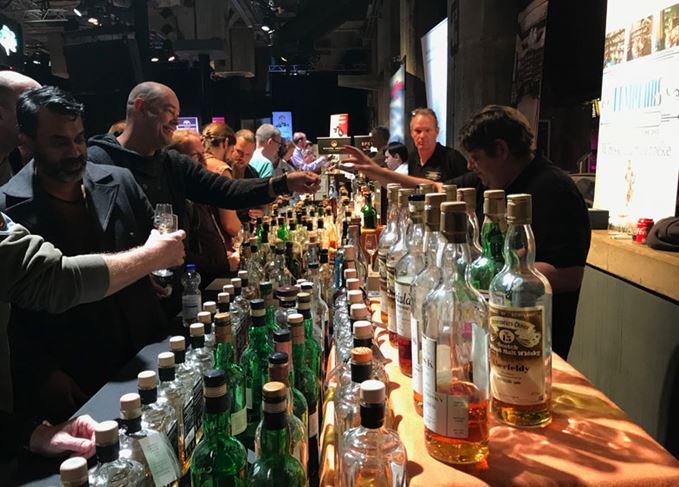 Collectors’ items: Many whiskies on offer at the Gathering are exhibited by private collectors

While whisky has developed into a global phenomenon, and is drunk in far-flung corners of the world, the whisky community is a tight-knitted affair, and in a way much smaller than ever. Technological advancements have made it easy for whisky enthusiasts from all over to stay in touch. Facebook and Instagram are two such hotbeds of whisky socialising. Slightly less obvious is Whiskybase: a vast online database of all things whisky, primarily used by people keen on tracking their whisky collection.

Once a year the bits and bites transmitted on the Whiskybase website come to life at the Whiskybase Gathering, a festival held again in the Maassilo. This 100-year-old grain silo in Rotterdam’s docklands is transformed into a striking event space. The Gathering is a festival that has a decidedly un-commercial feel – the absence of big brands makes sure of that. It is not a place with towering, gigantic stands that look like Frank Gehry could’ve designed them; the Gathering is a very democratic affair – each exhibitor uses the same black-clothed tables. How much space one gets is purely dependent on the amount of whisky one brings.

While there are a handful of Dutch importers showcasing some of the usual whisky suspects, it’s the private collectors that dominate the Gathering landscape, which tells you about the kind of consumer this event is aimed at. There’s certainly whiskies that’ll appeal to the beginning whisky drinker, but he or she’ll likely feel overwhelmed; the more experienced enthusiast will feel right at home.

The private collectors bring along collections ranging from a few dozen to hundreds of different whiskies, consisting of tasty blends from decades ago – available for a few euro – to priceless Scotch whiskies like a 1966 Ardbeg from the legendary The Birds series by Moon Import.

A number of the private collectors are avid Whiskybase users themselves, like Henri van der Ree. The Gathering is the only whisky festival he exhibits at. ‘When they organised the first Gathering two years ago, I was asked if I wanted to be an exhibitor,’ he explains. ‘I live in Rotterdam, am a customer, and know the owners. I had never done anything like it before, but I thought: “Hey, why not?” It’s incredibly fun. The range of whiskies offered here is what sets it apart from most whisky festivals. Even veteran visitors of whisky festivals will find plenty to their liking at the Gathering.’

Another example of a Whiskybase member turned exhibitor is Mauro Leoni, a well-known figure on the Italian whisky scene. Leoni made the trip to Rotterdam together with fellow members of his Glu Glu 2000 Malt Whisky Club, and together they exhibit club bottlings, as well as a few whiskies from their private collections. ‘I really like the atmosphere here,’ Leoni says. ‘Many of the visitors are pretty knowledgeable, and the people know what they want. While other big festivals have more commercial exhibitors, this has a family ambiance.’

A crucial element of Whiskybase is the rating of whiskies. While they certainly didn’t invent the concept, the website surely helped popularise it. This somewhat controversial element of whisky culture is also incorporated in the Whiskybase Gathering, where visitors can rate the whiskies they taste by logging in to a dedicated website. Live standings are displayed on large screens around the venue. While the idea is admirable, the ranking of a whisky is often based on less than a handful (sometimes just one) of votes, skewing the standings unfavourably.

At times this feature discouraged people to think for themselves, and it resulted in a sheep-like flock mentality. To illustrate: At one point a Bunnahabhain 1979 from Berry Bros. was atop the leaderboard, which sent a rush of people over to the stand that was carrying it. It is symbolic of how we judge and experience whiskies nowadays.

With all the information available to whisky drinkers you don’t often get the chance to sip a whisky without bias. Chances are, you want to try a whisky because a well-known whisky personality has given it a high score – or because a whisky is going viral on social media. Instead, what I love about a whisky festival is simply strolling around unbothered by the frenzy of the digital world, peeking at what’s on offer, and trying something just because I fancy it for whatever reason – not because standings on a screen tell me it is the highest-rated whisky at that moment.

The first two editions of the Whiskybase Gathering only lasted one day. This year, the event organisers decided to extend the festival by adding a second session on Sunday. Combined with the usual Saturday session, as well as a whisky dinner on Friday, and bring-your-own-bottle events on both Friday and Saturday, the festival now bridged a full weekend. As a result it made it more worthwhile for people from far away places to fly in, making this edition of the Gathering more international than ever with enthusiasts from 26 different countries coming over to Rotterdam.

Australians Julian White and Brooke Hayman were among the international whisky fans who found their way to Rotterdam. The couple own the bar Whisky & Alement in Melbourne, and organised their trip to Europe around the Gathering. ‘There’s stuff here that you just can’t get in Australia,’ White says, while in front of the Whisky-Fässle stand, an independent bottler from Germany who never exhibits at festivals, except for the Gathering.

Also among the visitors from abroad were a notable group of attendees from China. They started drinking whisky four years ago, and at the festival they were confidently working their way through what they call ‘old and rare’ whisky, like a Tormore 1966 from Samaroli. A few members of the group live in London, but others flew in all the way from Beijing. Thankfully, one of them says, the Whiskybase website isn’t blocked in China, because he uses it quite a lot. The whiskies available at the festival are great, but he adds, ‘the social aspect is almost more important than anything’.

The third edition of the Whiskybase Gathering surpassed the already high standard set during the previous editions. The event has an ingrained sense of community: both because of the foundation built by the popular website, as well as the involvement of its users in the organisation – be it as a volunteer or as an exhibitor. Add to that the more international feel of this year’s edition, and the Whiskybase Gathering is undoubtedly one of the highlights of the European whisky festival scene.