An event that is quickly cementing itself as a must-see whisky attraction, this year’s Dramboree provided a laid-back atmosphere for Scotch fans to enjoy drams, distilleries and a dip in a loch. Angus MacRaild reports. 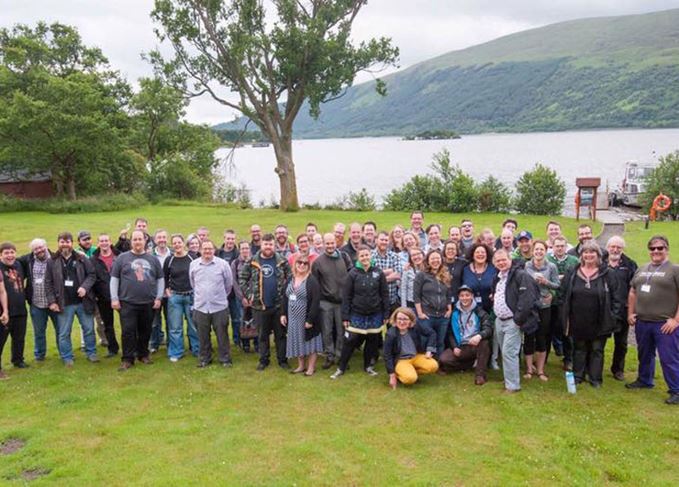 Dramboree-goers assemble for this year's weekend of tastings, distillery tours and loch swimming

That was the question kicking around quite a few minds back in 2013 when the very first Dramboree was in the works. Now, not long after the conclusion of the fourth Dramboree at Rowerdennan on the shores of Loch Lomond, it’s clearer than ever that – more than just working – the event has become something of a whisky calendar highlight.

For veterans the template is familiar. Gathering in Glasgow for communal travel north to the chosen venue, attendees are armed with bottles for the ‘Dram Table’, for which it is everyone’s responsibility to provide at least one bottle for. Pints are had, drams are shared and moods are invariably high by the time everyone arrives. For the Loch Lomond venue the journey is completed by way of a ferry across the loch to the small jetty outside Rowerdennan Youth Hostel.

Between the Friday night and Sunday morning tastings are had, food is scoffed and distilleries are visited. The structure is straightforward and deliberately unfussy. What changes with each passing year is the selection of drams upon the table, the presenters, distilleries and the invariable array of hi-jinks and nonsense that accompanies such whisky-fuelled gatherings. It’s a sound recipe for fun, and one that has proven itself four years in a row now.

Dramboree was the brainchild of Jonny McMillan and Jason B Standing. The idea was first hatched back in 2012, born out of a desire to create space, time and opportunity to enjoy whisky with friends in a relaxed atmosphere.

Standing said: ‘We just thought that this sort of festival, one that was primarily about fun, should take place in Scotland. We didn’t want it to be one of those “one price all you can drink” models which are over so quickly.

‘We wanted to do something out among the Scottish countryside where people could really relax, see a distillery, enjoy a big dram table at night. Just generally have a great time.’

There were other, more ideological, considerations as well. McMillan explained: ‘Part of it for me was also about countering this trend of “Twitter tastings” and online sample sharing and treating whisky in a very clinical way.

‘For us, real enjoyment of whisky was about getting together and socialising and not taking it too seriously. That’s at the core of Dramboree.’

The structure and size of Dramboree has evolved a little but now seems quite honed. The aim is not to bombard people with the tyranny of choice and information, but rather to create a shared experience which provides the right balance of consistency and variety year-on-year.

Each year begins with a big Friday night welcome tasting. This year it was a presentation from three of the UK’s oldest independent bottlers: Gordon & MacPhail, Cadenhead and Berry Bros. & Rudd. Their respective presenters Stephen Rankin, Mark Watt and Rob Whitehead were jovial, laid back and revelled in the sort of gentle camaraderie crossed with good-natured piss-taking, which befit a festival and crowd such as this.

This year’s Dramboree was centred around a visit to Loch Lomond distillery. It’s a distillery few people have been able to visit – its previous owners being decidedly uninterested in dolling out hospitality. But under new ownership things are really starting to change.

All 54 of us arrived on Saturday morning and were swiftly divided into four groups which were rotated through four different tours/classes. Our group went first to the onsite cooperage. Loch Lomond is a sprawling site: clumsy, vast, monolithic and bedecked by stainless steel. The filling store itself – dormant for our visit – appeared as some sort of abattoir-esque annex to the cooperage itself. Despite the dystopian aesthetic, the almost rustic inversion of the cooperage was a sharp reminder of the fact that real craft is not automatically a strange bedfellow to vastness of scale. Talking with the coopers and watching them at work was one of my highlights of the weekend and something I’d urge you not to miss out on should the opportunity come your way.

After this followed a tour of the distillery itself – a post-modern monument to stainless steel that felt like a warren of ladders, piping and tanks. Carve a piece of it away and it might readily find a home in some overly serious gallery of modern art, offering up frosty metallic comment on the industrialisation of our world.

But once again it was stark reminder that beauty can be born in the ugliest of places. They talked of their focus on longer ferments and use of wine yeasts to encourage longer, malolactic fermentations. They took pride in detailing the grain whisky they’d been making through a column from 100% peated malt. It all felt hidden, quietly workmanlike and serious.

During the blending workshop, nosing the new make spirits in the lab and subsequent tasting in the sampling room, it became clear the old ‘blue tube’ Loch Lomond single malt is a relic of the past. Those laughable, long-derided bottlings have been ground to distant memory by the plush, fat and fruity malts in the new livery.

The whole experience was unanimously praised by all of us upon conclusion and the distillery in the hands of its new ownership stands as testament to what can be achieved by ‘actually giving a fuck’, as someone succinctly put it.

The rest of the weekend was taken up with the traditional dramming interspersed with a tasting of some of the more interesting wares from William Grant & Sons, courtesy of Alwynne Gwilt who was recently appointed as the group's UK whisky specialist, a food and whisky cooking class and of course much wild swimming in the loch.

One of the central traditions of Dramboree, ever since we first came to Rowerdennan in 2014, has been the ‘Loony Dook’ – an invigorating 8am plunge into Loch Lomond. Although, the reality of it is people traipse in and out of the water all weekend long. My lasting memory of this year will be a group of us – merry, laughing and breathless – plunging into the dark waters under the last blue tinges of a Scottish midsummer night.

There is something in a cocktail of friendships, good whisky, wild swimming and rural isolation that is pure, life-affirming and rich with the best kind of decadence. That for me is the encapsulation of what Dramboree is all about. It is at once a celebration and a respite; boisterous yet soothing; remote yet never lonely.

In answer to those trepidations that were hazarded back in 2013: it works just fine. And I, for one, hope it doesn’t change.