Argocats, sma’ stills and a passable impression of The Two Ronnies were some of the highlights of SoSWF day three. Sean Murphy reports. 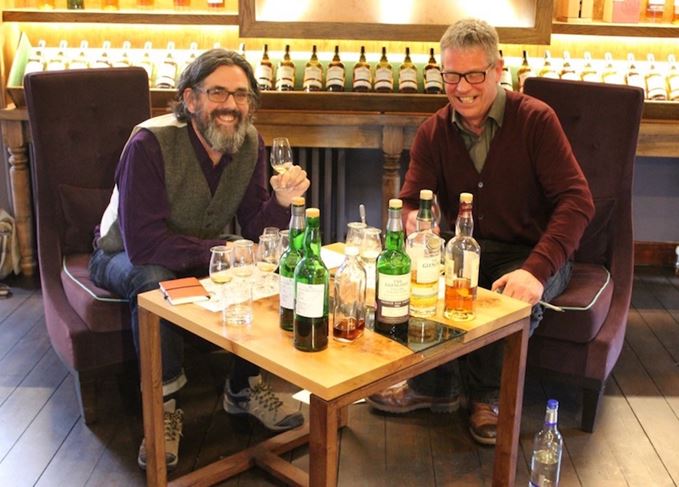 And it's goodnight from me...: Dave Broom and Alan Winchester at full throttle

Despite a little confusion as to the provenance of its name, the Argocat – which we eventually dubbed the Argonaut, despite the absence of Jason – turned out to be a tenacious little eight-wheeled, off-road vehicle.

Our driver, Charlie Ironside of Glenlivet Hill Trek, expertly guided us through the fields surrounding The Glenlivet, whisking us off to a cairn-topped hill where some of the best views of the Livet valley, the Cairngorms and the distillery itself could be found.

But perhaps the best sight of the day – and one that will live long in my memory – was that of writer Ian Buxton in the Argocat behind us, somehow still managing to look effortlessly cool despite having to cling on to the back of his vehicle as it negotiated the steep incline and uneven ground of the heather-covered hill.

By the time we came back down, the sun was shining and, though a cold breeze was blowing in off the Cairngorms, the accompanying dram – at the site of the old distillery – rounded the trip off perfectly.

The Glenlivet, by now an old hand at catering for the festival, had its own Sma’ Still set up in the finely manicured garden, manned by one of the distillery workers – giving people the chance to try the surprisingly drinkable spirit from a plastic cup.

This offered a playful juxtaposition to the grandeur of the vertical tasting – taking us through The Glenlivet through the decades – led by Dave Broom and master distiller Alan Winchester.

You'd be forgiven for thinking the pair were channelling The Two Ronnies, such was their camaraderie, jests at each other's expenses and anecdotes and quips about the industry.

Alan’s hospitality and reputation were ably enhanced by the fact that he provided us with not only a stunning 40-year-old from 1964, but also a wonderfully waxy 42-year-old from 1959 that will really linger long in the memory.

A trip in the evening, to Gordon Castle, the historic home to the Dukes of Gordon, promised a quiet dinner in a setting of grandeur. The fifth Duke of Gordon, who lived in the castle, was instrumental in helping to legalise whisky production in 1823, prompting his tenant George Smith to take advantage of the new law… and the rest, as they say, is history.

Today, the family, led by Angus Gordon Lennox and his wife Zara, have done much to restore the grandeur of the castle, which offers stunning accommodation and several of the best salmon fishing spots you'll find on the Spey.

Keeping with the history of the place, the dinner was accompanied by several drams from The Glenlivet, provided by the ever-knowledgeable Ian Logan.

The true surprise of the night, though, was just how down-to-earth, welcoming and fun our two hosts proved to be. Zara found time to chat away about her plans for the estate and her love of her home, and indeed the surrounding Speyside area, and Angus struck up an unlikely friendship with writer Martin, who, dressed in jeans and plaid shirt and sporting a ginger beard that would make a Aberdonian fisherman jealous, couldn't have looked more out-of-place.