Visually magnificent, with superb food and drink, and unrivalled cultural attractions, Florence is Tuscany in concentrated form. Tim Forbes picks out some of the many highlights. 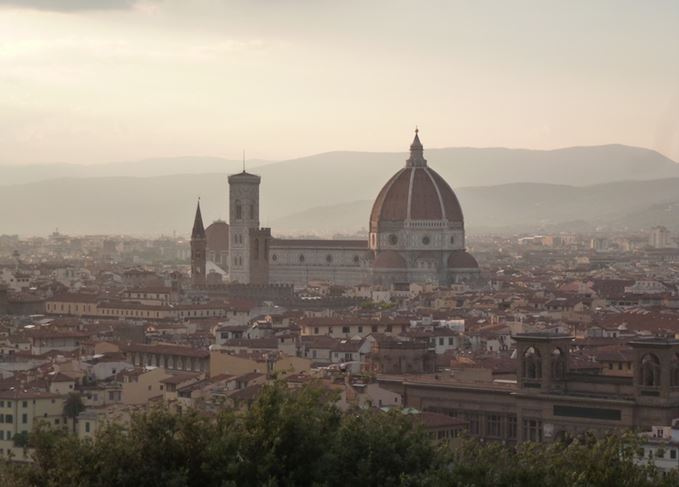 Florence, or Firenze, is the proudest jewel of Tuscany. In a region famous for the surpassing beauty of its rustic countryside sits one of Europe’s most jaw-droppingly gorgeous cities.

Yet, despite being Tuscany’s capital and largest city, Florence is wonderfully compact. Fewer than 400,000 people live in the city and all the main attractions are within walking distance.

Florence’s airport mainly deals with domestic flights, so international visitors are best served by Pisa airport, an hour away by bus or train.

The latter will bring you in next to one of the city’s most glorious churches, the Basilica di Santa Maria Novella with its black-and-white marble facade and interior frescoes by Gothic and Renaissance masters.

Queues for major galleries are generally long, so book a slot in advance.

Arrive mid-morning, drop your bags off and grab a slice of street pizza on the way to a walking tour of the city.

These cover everything from churches and galleries to the history of the Medici family who ran Tuscany for three centuries from their Firenze hub, contributing four Popes and creating the Renaissance along the way.

Most tours take about an hour and many are free, although the guide will ask for a contribution at the end. Several free tours depart from the piazza next to the Basilica di Santa Maria Novello.

After your quick tour, hotfoot it north to visit one of the world’s most iconic sculptures. Everyone knows that Florence is home to Michelangelo’s David, but don’t just join the avid queue snaking down the street outside the Galleria Della Academia – there are two other copies elsewhere in the city. With a bit of luck we’ll get round all three.

The Galleria Della Academia’s David is the original, it’s utterly stunning and, as you’ve booked ahead you can walk straight in.

Completed in 1504, David was moved to the Galleria in the late 19th century after suffering wear and tear from 370 years of exposure to the elements in the Piazza della Signoria.

Now restored to full magnificence, he is preceded by a series of extraordinary unfinished Michelangelo sculptures known as The Giants. These fascinating arrested-development works show figures seemingly struggling into being from the enormous blocks of marble that house them, doomed to remain trapped in the hinterland between imagination and existence.

Splendid isolation: but only because we've cropped out the crowds (Photo: Tim Forbes)

Beyond David is a further room bursting with statuary, populated by dozens of busts from the 16th century onwards, surrounding larger full-length figures in the middle of the room.

These include the artist's trial run for the statue of another noted Florentine native, Niccolo Machiavelli. The finished piece is on the outer walls of the Uffizi gallery.

Worked up a thirst after all that culture? Florence is the birthplace of the Negroni cocktail, and the café where the Conte Cammillo Negroni first asked for some gin in his Americano still exists. Now known as Caffé Giacosa rather than Bar Casoni, it belongs to fashion designer Roberto Cavalli, who has a boutique next door.

Not content with producing a pleasant but unexceptional ‘classic’ Negroni, the staff have also come up with a variant called, ahem, the Negrunge, featuring dry vermouth, bitters and mandarin liqueur. I didn’t, and neither should you.

Time for some proper evening sustenance. Trattoria Cammillo has been run by the same family since 1945 and time seems to slow down as you enter this old-fashioned restaurant.

Always a local favourite, it’s now on the tourist map after featuring in the Where Chefs Eat guidebook. Whitewashed walls are hung with a mix of art and old exhibition or film posters. White-shirted, middle-aged waiters in aprons bustle about offering friendly, unhurried service.

Trattoria Cammillo is on Borgo San Jacopo, just south of the river in a part of town that was the traditional seat of the Frescobaldi winemaking dynasty. The family’s Nipozzano Chianti Rufina Riserva features on just about every wine list in the city, is a good partner for tomato-based pasta dishes or steak, and won’t break the bank.

But if you feel like splashing out, many restaurants will have Sassicaia, Ornellaia and other Antinoris, often quite mature vintages. For anything in between, just ask your waiter for a good DOCG Chianti or Brunello.

And, if you’re one of those weird people who don’t drink red wine in hot weather, ask for Vernaccia di San Gimignano, a crisp, exotic-fruit-tinged white.

It’s been a long day, but on your way home, cross the river Arno via the Ponte Santa Trinita and look east to the Ponte Vecchio – the medieval bridge with all the houses on it.

During the day, it’s not great: a tourist-stuffed street lined with quaint wooden-fronted shops – mostly tacky jewellers’, unfortunately – and with a large population of itinerant peddlers hawking tourist tat.

At night, however, and viewed from the safe distance of the Ponte Santa Trinita, the Ponte Vecchio’s lights glisten and shimmer on the Arno’s soft ripples. It’s really rather beautiful.

Make an early start and get down to the Uffizi Gallery on the north bank of the Arno. Before going in, check out the Piazza della Signoria, the central square of Florence and the original home of Michelangelo’s David.

The replica stands outside the Palazzo Vecchio, the original Medici palace and seat of power. David caught the imagination of the local population when Florence was an independent city-state, representing an underdog standing up to a larger power – his defiant gaze faces Rome, the Goliath of the south.

Further along the Palazzo’s perimeter to the north is the Fountain of Neptune, a popular tourist photo-opportunity, while the south side of the square is home to the Loggia dei Lanzi, an open-air sculpture gallery including Cellini’s bronze of Perseus with the head of the Medusa.

Back to the Uffizi. The 16th century ‘offices’ were originally intended for local magistrates, but soon became home to the Medicis' burgeoning art collection, and today the Uffizi is one of the world's most visited art galleries. Just as well you booked ahead, because the queues are horrendous otherwise.

And with good reason. The top floor has two enormous corridors packed to the rafters with 16th century paintings of the international aristocracy (Wolf Hall fans will enjoy spotting all the major characters peering down on them), interspersed with dozens of classical statues and busts.

The ceilings are adorned with a dizzying mix of fantasy creatures alongside geometric designs and medieval grotesqueries. Rooms off the corridors are filled with priceless medieval and renaissance art and statuary, both religious and secular. The sheer quantity and quality of this aesthetic onslaught can be overwhelming.

The Uffizi is home to two of Botticelli’s greatest masterpieces – The Birth of Venus and La Primavera. You’ll need to jostle for your spot in front of those two, but the gallery is crammed with remarkable artworks from Giotto, Michelangelo, Titian, Raphael and, for oenophiles, a wonderful rendition of Bacchus by Caravaggio.

Time for some fresh air. Head down the Vasari Corridor to the Palazzo Pitti and the Boboli Gardens.

The Vasari Corridor, a hidden overground passageway, connects the Palazzo Vecchio with the Palazzo Pitti across the river, passing through the Uffizi and over the Ponte Vecchio so that the Medicis and their noblemen friends could travel between their palaces unmolested.

The Palazzo Pitti is another magnificent museum, but if you’ve had enough of marble and masterpieces, picnic in the Boboli gardens instead – full of fantastic outdoor sculptures, but plenty of fresh air and greenery too.

Next, stop off for an Aperol Spritz in the pop-up bar at the top of the Fort Belvedere, a remarkable symmetrical construction hewn out of the crest of a hill overlooking the city, before descending into the adjacent Bardini gardens for a beer in the quiet summer café, a stone loggia with another spectacular view.

As sunset nears, time to walk up to the Piazzale Michelangelo, home of the city’s third and last David, cast in bronze and now a fetching shade of oxidised green.

But even David has to take second billing to the panoramic view of Florence itself.

Watching the sun go down over the Palazzo Vecchia, the Duomo and the Basilica di Santa Croce, you’ll already be planning your next visit.

Walk back down towards the river and drop into the tiny I’ Pizzacchiere, a six-table restaurant serving the best pizza in Florence. Again, book ahead or you’ve got no chance.

Stroll back over the Ponte Vecchio one last time to take in the magnificence of the Duomo at night. For hipsters, there’s Move On, a curious, music-themed craft beer bar with a proper (though expensive) record shop upstairs, right outside the cathedral.

Self-catering is recommended assuming you want to eat out. Florence’s small size makes it perfect for Airbnb, which has a variety of centrally-located apartments. Otherwise:

Hotel Fiorita: located by the train station and the Basilica, a budget hotel perfectly positioned for many of the galleries.

Hotel David: 19th century mansion converted into a 24-room hotel in the 1950s. Run by the third generation of the Cecioni family, and located on the south side of the Arno.

Hotel Brunelleschi: in a quiet piazza in the heart of the city, the Brunelleschi is a rather more grandiose establishment – and views of the Duomo’s iconic Cupola del Brunelleschi (after which the hotel is named) don’t come cheap.