The dramatic backdrop of the Cité and the tranquil Canal du Midi dominate the historic town of Carcassonne, but there’s much more to discover in this beautiful corner of south-western France. Neil Wilson reports. 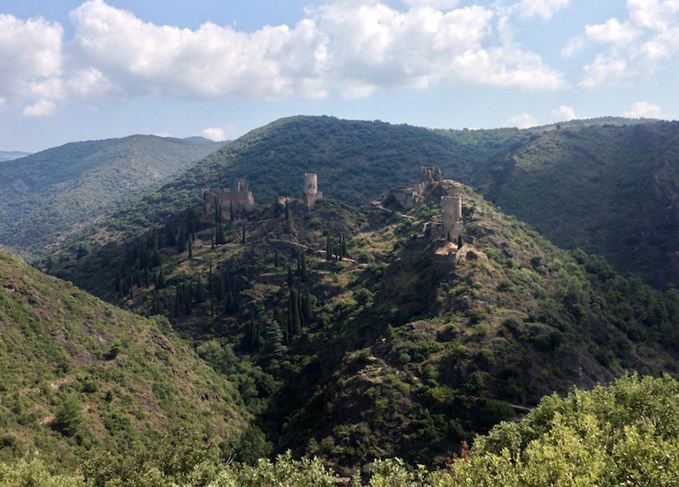 Carcassonne has two main claims to fame: its medieval Cité, which dominates the skyline in an almost Disneyesque manner, and the Canal du Midi that winds through the town.

The Cité’s profile is something of a trompe l’oeil as it was substantially reclaimed and rebuilt in the second half of the 19th century under the guidance of Eugène-Emmanuel Viollet-le-Duc, one of the founders of the modern science of conservation.

Both these attractions are UNESCO World Heritage Sites and enormously popular, but I would succumb and head up to the Cité to join the hordes to start your visit.

The Cité is the fifth most visited state-owned heritage site in France, and the busy narrow streets can be exhausting in the heat of high summer so the best time to visit is in the relative quiet of the spring and autumn. Entry is free and it is one of the ‘must dos’ while in Carcassonne.

Apart from simply soaking up the atmosphere, a visit to the Basilica Saint-Nazaire and Saint-Celse is a must, followed perhaps by refreshment in the bar at the celebrity-magnet Hôtel de la Cité next-door – where you might bump into Brad and Angelina if they are in town.

My recommendation for eating inside the Cité is Comte Roger, but if you are on a budget there are numerous cafés and restaurants selling good-value food and drink dotted around the streets and, in particular, in Place Marcou.

Cassoulet, the hefty bean-and-meat stew of the region, abounds everywhere, but be warned: it is extremely filling and most versions include confit of duck and Toulouse sausage along with white haricot beans. The Languedocians eat it in any season – just as the Scots do not restrict haggis to Burns Night.

Disneyesque: the skyline of La Cité looks down on the Pont Vieux

If lunch is not on the menu, head down from the Cité and cross the Pont Vieux over the Aude, going west through Place Gambetta towards the heart of the Bastide Saint-Louis in La Ville Basse, the commercial and administrative centre of the town.

The main market takes place on Tuesday, Thursday and Saturday mornings in Place Carnot. Here you can simply ‘people watch’ in one of the square-side cafés but, if buying, beware of some of the cheesemongers who are usually overpriced and expert in fleecing unsuspecting tourists. The fruit and veg are all good value, however, and speciality bakers sell all sorts of breads and pastries.

At the south-west corner of the Place, at the junction of Rue de Verdun and Rue Chartran is La Ferme, an épicerie fine (what the Victorians would have called a food emporium), which is worth a browse at the very least.

I say this because I have never actually bought anything from it, with its jaw-dropping prices, but it is a beautiful retail atmosphere, harking back to the good old days. Next door they have a wine shop as well.

The old part of the building dates back to 1768, when it was the Corn Market. Les Halles is situated in Place d’Eggenfelden, just off Rue de Verdun, named after the German town with which Carcassonne is twinned.

Worth a browse: La Ferme combines beauty with ‘jaw-dropping’ prices

Carcassonne’s merchant wealth was based on the production of textiles during the 18th century, and many imposing ‘hôtels’ (merchants’ mansions) are still to be found within the Bastide. A walk along Rue de Verdun reveals the Hôtel Besaucèle, at no 8, Hôtel Roux d’Alzonne at no 73 and Hôtel Bourlat at no 81.

One block away to the south on Rue Aimé Ramond stand the Hôtel de Murat (no 5), now home to the Carcassonne Chamber of Commerce, Hôtel de Rolland (no 32) and the medieval Maison du Sénéchal at no 70, which predates the others and would have been founded on the proceeds of some other commercial, or ecclesiastical, activity.

Like all French communities, the local fêtes are awaited eagerly. Carcassonne specialises in an international arts festival covering theatre, classical and popular music, circus, opera and dance that runs during most of July, making this the ideal time to visit.

The venues range from the Place Carnot, Place Chénier and Place Marcou, where free concerts take place, to ticketed events in the Cité at the Théâtre de la Cité Médiévale, the Château Comtal and at a new 10,000-spectator venue at La Fajeolle which the apparently ageless rocker Johnny Halliday recently inaugurated.

The local tourist office at 28 Rue de Verdun can advise on all these events, as can the arts festival website.

Dinner can range from simple and honest dishes in the cafés and restaurants to Michelin-starred fare at a number of central locations. At the top end I would recommend Robert Rodriguez at 39 Rue Coste-Reboulh to experience real Languedoc cooking in quirky surroundings.

If you are in town on 14 July, be prepared for an invasion as over half-a-million visitors flood onto the banks of the Aude to watch one of the world’s truly great firework displays.

This has been held annually since 1898 when, on 14 August, a delegation of artistic, literary and political personalities called the Cadets de Gascogne entered the town.

To mark the occasion, the city organised a grand feast in their honour and concluded the evening by setting off fireworks and flares above the Cité’s walls to transform them into a ‘city on fire’.

At 10.30pm, every 14 July, Fête Nationale (or Bastille Day as the Brits prefer to call it), the tradition continues. Unmissable.

The other essential in Carcassonne is a boat trip along the Canal du Midi. The main place to jump aboard is in the canal basin, or port, in front of the main rail station on the north side of the Bastide.

There are a number of operators, but a good start can be made here. The list of canal boat options is extensive, from day-hire and guided cruises to epicurean outings with like-minded gastronomes.

The 150-mile-long, 17th-century canal essentially cuts France in two, from Toulouse (where it joins the Canal de Garonne and on to the Bay of Biscay) to the Étang de Thau on the Mediterranean coast at Sète.

It was completed in 1682 by Pierre-Paul Riquet and remains an engineering masterpiece, fed with a complex system of rigoles (watercourses) and bassins (reservoirs) high on the Montagne Noire to the north of Carcassonne.

Straight and narrow: the Canal du Midi is an engineering masterpiece

Hiring a car for the day and buying a tourist map will give you the freedom to explore the ‘Black Mountain’.

Its attractions are well signposted off the main roads and the first stop is one of the wonders of the natural world, the Gouffre Géant (Giant Abyss). Discovered by potholers in 1968, this vast subterranean cavern is so large that the Eiffel Tower could fit inside  – the scale of it quite simply beggars belief. Tours run regularly, so just turn up and join the first one available. Visit it at least once in your life.

The Montagne Noire is deep in Cathar country. A medieval heretical Christian sect, the Cathars were eventually wiped out in 1244 at Montségur by the Catholic church.

One of their strongholds lies at Lastours, a 30-minute drive back the way you came in the next valley. The ‘Towers of Cabaret’ stand majestically on the ridge of a high outcrop above Lastours (free, but obligatory, parking is at either end of the village) and command what was a medieval route to Carcassonne.

Entry is gained from the old factory where the reception desk is, but wear some grippy-soled shoes or trainers as the climb to the towers, albeit brief, is steep.

Eating out on the Montagne Noire can be tricky as restaurants are sparse, but between the villages of Brousses and Villaret, left off the D103 on the way to Saissac, the farm restaurant of La Table de Rebombier makes up for this with great, rustic cooking at reasonable prices.

Finally, buy a bottle of the excellent local white (or rosé) sparkling wine called blanquette, produced around Limoux, just south of Carcassonne. Its manufacture predates Champagne and is recorded as far back as 1531, made by the monks of the Abbey of St Hilaire.

I suggest you chill this immediately and enjoy a toast to your visit to Carcassonne before you leave.

Ryanair flies direct to Carcassonne from Cork, Dublin, Stansted, Liverpool, East Midlands and Glasgow (seasonal, April to October) and some other European locations.

A bus service connects directly into the centre of Carcassonne and the cité. Car hire can be arranged via carrentals.co.uk, who tend to have the keenest prices, with car pick-up and drop-off located just outside the airport terminal.

Aude Tourism is a good source of information to do some planning before you visit.