Gaz Regan is rightly proud of the fact that he’s never been banned from a pub or bar – although he did come close to it on one fateful afternoon in Speyside. But at least he got a decent cocktail recipe out of the experience… 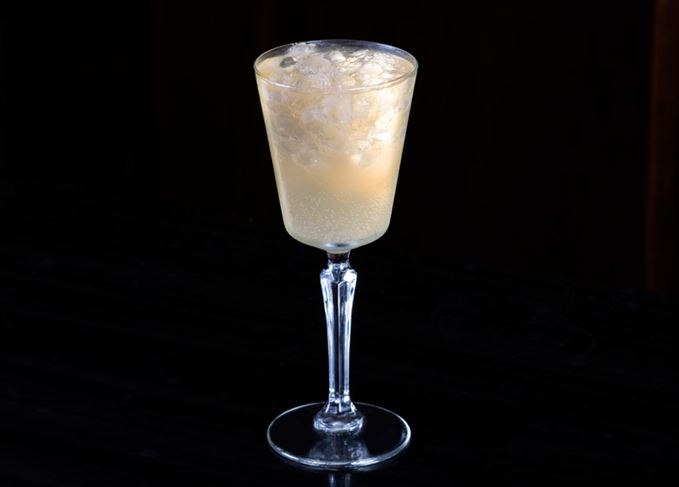 The Royale: just make it with whatever damn Scotch you want.

Nobody is quite sure where the term ‘86-d’ comes from, but in the hospitality business, if you get 86-d from a pub, you are barred, banned, excluded from, forbidden entrance to, and not allowed into that place ever again. Well, sometimes the ban gets lifted. Take the case of Warwick Armstrong, for instance.

Warwick was a regular in my parents’ pub, The Bay Horse, just north of Blackpool in England, and he was very much a rough-and-tumble guy who lived on the street, hunted rabbits with a shillelagh – I kid you not – and occasionally, after a few pints of ale, he would punch anyone within arm’s reach. Just for the hell of it.

There were only three pubs within walking distance of wherever it was that Warwick called home, so if he got barred from all of them he had nowhere to take shelter and, during the colder months, that was considered a cruel and unusual punishment.

So the owners of the three pubs collaborated a little just to make sure that at least one of them was serving Warwick on any given day of the year. And, without Warwick, we’d have no fresh rabbit pie, after all, so the gesture wasn’t totally selfless.

Personally I’ve never been 86-d from a pub, or from a bar for that matter, but I was asked to leave a hotel bar in Scotland once, though I was allowed back in there later the same day. Thank God.

I was on a press trip at the time, prowling around distilleries, meeting distillers and gathering as much knowledge as possible in a very short time. The year was around 2000, if memory serves, and a gentleman (I use the term loosely) by the name of Terry Sullivan was on the trip with me, and about 10 other drinks scribes.

The sight of Terry and me at the same bar together has been known to make some bartenders pale – we like to drink together, Terry and I, and neither of us has the sense to know when to call it a night. I love drinking with Terry.

The Craigellachie Hotel: A Speyside home away from home for many a whisky traveller

After arriving in the Highlands, we joined a queue to check into the Craigellachie Hotel in Speyside, and Terry spied a man in one of the hotel’s bars who looked as though he was setting up for service, so he grabbed my arm and asked if I’d like a drink while we were waiting. I didn’t need to be asked twice.

The bartender’s name was Peter Brown, and a finer, more welcoming soul I swear doesn’t exist on the face of the Earth, so although his bar wasn’t actually open in the middle of the afternoon, he did offer to make drinks for Terry and me, as long as we didn’t invite everyone on our trip to join us. Sounded fair enough to me.

‘What Scotch cocktails do you make, Peter?’ I asked, and I was presented with a short list of mixed drinks, each of them calling for a Scotch base, and one of them, The Royale, looked sort of interesting to me – it was a mixture of blended Scotch, apple schnapps and ginger ale. Nothing too complicated or fancy, but I thought it might just fit the bill for an afternoon flyer, as it were.

‘I’ll take one of these, please, Peter,’ I said, pointing at the drink on the cocktail menu, ‘but could you make it with the 18-year-old Macallan, please?’

Macallan was the distillery we were due to visit the following day and, besides loving the whisky to death, I was also trying to show a little loyalty to the company that had helped get me to Bonnie Scotland in the first place.

‘I’m sorry,’ replied Peter, ‘but I don’t use single malts in mixed drinks – that’s what blended Scotches are best for.’

‘Hmmm, I understand where you’re coming from, Peter,’ I said, ‘but surely this drink would be better if we used a great malt in it? Don’t you agree?’

‘Aaah, that might be the case,’ replied Peter, ‘but you’d lose all the complexities of the malt if you use it in a drink like that.’

‘But you agree that the drink would be better if we used the Macallan?’

‘Great. Please make us two Royales, and please make them with The Macallan 18-year-old, if you don’t mind.’

As I uttered those words, Peter was bending down to reach something under the bar, and he slowly rose, glaring at me, his face reddening and getting too close for comfort to my face. ‘Get out of my bar,’ he said.

Thus I was banished for the rest of the day – but I made quite a comeback that same evening, treating all and sundry to some raucous songs that fair made our hosts blush.

Here, then, I bring you the Royale, courtesy of Peter Brown and, in deference to Peter, I’ve left out any brand names so you can make it with whatever Scotch you like. It does work well with The Macallan 18-year-old, though…