Screenwriter Paul Laverty is a long-time collaborator with acclaimed film director Ken Loach, with the latest Loach work, Sorry We Missed You, now in cinemas and attracting rave reviews. Tom Bruce-Gardyne spoke to Laverty about working with Loach – and about The Angels’ Share, the whisky film they made together in 2012. 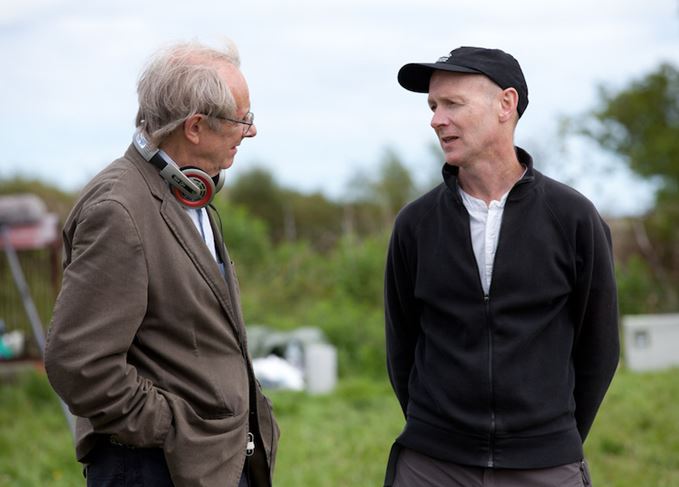 A week before the UK release of The Angels’ Share in 2012, I spoke to Charlie MacLean, who was the movie’s whisky consultant and one of its stars. ‘What’s so clever about the film,’ he told me, ‘is that it turns so many things on its head.

‘These delinquents [the four main characters] turn out to be the “angels”, and if there’s a message, it is one of salvation through whisky. That in itself in an inversion as it’s usually the other way around, with the demon drink as the road to perdition.’

That whisky can be paradoxical, and even subversive, is what attracted the screenwriter Paul Laverty, a long-time collaborator with the director, Ken Loach. Today, looking back on the film, he explains: ‘Every story takes place in some sort of world, and I suppose what I liked were the contradictions in whisky.’

Among these is the fact that whisky and the distilleries, in their beautiful settings, are so close and yet somehow beyond the reach of the marginalised community portrayed in the film.

‘If you were to speak to some of the kids from some of the tougher backgrounds in cities, you would be amazed how many have not been to the countryside,’ Laverty says. ‘As for whisky, it’s our national drink and speaks to a part of Scottish history, but again some kids have got no idea.’

Laverty first encountered whisky at home, and recalls: ‘My dad drank far too much of it. It was always Bell’s, and as a child I hated the smell and the connotations. But as I got older my brother-in-law, Angus McConnel, who came from the Western Isles and knew his malts, introduced me to them.

‘I think drink very much depends on the context. If someone’s drinking too much, there’s tension, but when it’s wrapped up with friendship and appreciation, it’s something else. Like anything that’s fine in life, like the palate or good food and good company, it’s a very humane environment, and I really had that with Angus.’

Laverty can’t remember where he first heard the expression ‘the angels’ share’, but says: ‘I just thought there was something quite magical about it, and the way it fitted with these kids needing good luck. There was this sense of transcendence as the part that escapes the taxman, and it was very suggestive.’

And yet the angels’ share is also what every distillery bus tour hears about, along with the distillery cat that has killed millions of mice. ‘That’s another thing I love about whisky,’ Laverty says. ‘There’s a great craft and artisanship to it, but there’s an awful lot of bullshit as well.’

In his introduction to the screenplay of The Angels’ Share, Laverty writes of ‘... the mythical, the marketing, the professionalism, the phoney, the snobbery and of course the sheer genuine pleasure of it all, make for a wonderful concoction with many levels’.

The film’s screenplay was ‘quite well developed’ by the time he first sat down with MacLean over a few drams in 2010. ‘What I loved about Charlie is that he’s a real enthusiast, and wasn’t a whisky snob,’ Laverty recalls. ‘There was a real kind of joie-de-vivre in how he treated whisky.’

Once hired as consultant, MacLean received a full copy of the script – unlike the actors, who were only given their lines for each day’s shooting. This led to much teasing of Paul Brannigan, who plays the lead character, Robbie. ‘It’s a Loach film – it’s bound to end badly,’ he was repeatedly told. ‘You’re probably going to be murdered.’

Seeing that the story involved a whisky auction, MacLean suggested that the filmmakers might care to see a real one: an upcoming sale at Bonhams, where MacLean himself was auctioning a 70-year-old Glenlivet to raise money for the Japanese tsunami appeal.

It must have been quite some performance, for he was offered the part of whisky expert Rory McAllister the next day. ‘But I’m not an actor!’ MacLean protested. ‘Well, that’s the point,’ replied producer Rebecca O’Brien, another long-time Loach collaborator. ‘You just have to play yourself.’

Whisky love: Laverty thanks his brother-in-law for introducing him to the joys of single malt

And play himself he did, right down to the trademark monocle and bristling moustache. ‘As soon as I saw Charlie, I thought he was a natural,’ says Laverty. ‘I went to a whisky tasting he did. An actor would just copy that, but he knew it so well and did it with great aplomb.’

Making the film naturally taught Laverty a fair amount about whisky. ‘What was fascinating was understanding more about the sense of smell, and Charlie describing in detail how the palate works,’ he says. ‘With red wine and whisky, I now try and take a moment to really taste and smell. You try and imagine the process beforehand and just appreciate the craft.’

This aspect was brought home during a visit to Springbank, one of Laverty’s favourite malts, in Campbeltown. ‘Talking to the people malting the barley or making the whisky, they were real enthusiasts and it was like watching anyone skilled in their jobs, like they were working with leather or ceramics,’ he recalls.

‘There’s something very genuine about that. Then advertising people pile in and fill it with grandiose language, but that’s just part of the modern world of selling stuff.’ It is also another of whisky’s endless contradictions.

Rory or Charlie?: MacLean’s portrayal of a whisky expert is readily recognisable

The Hollywood Reporter called The Angels’ Share ‘a film full of love, laughter and whisky galore’ – as though the movie were some schmaltzy rom-com set in a distillery, which, of course, it isn’t.

Yet there’s no denying that whisky does have a couthie, sentimental side, and you wonder if that was ever an issue for this screenwriter. ‘I hadn’t seen Whisky Galore for years, and I knew our film would be very different,’ he says.

‘There’s a scene where Paul Brannigan’s character confronts his past and what he’s done, and there’s the contempt and hatred that his father-in-law has for him. There was something very raw about that. There was nothing couthie.’

The same can be said for the latest Laverty and Loach collaboration. Sorry We Missed You is a film about lead character Ricky and his family being crushed in the cogs of the gig economy as he takes on a job as a delivery driver in Newcastle on a zero hours contract.

Not a feel-good movie, in other words, and proof that Ken Loach remains the ‘angry old man of British social realism’, with or without detours into the world of whisky.

Sorry We Missed You is playing in UK cinemas from 1 November.