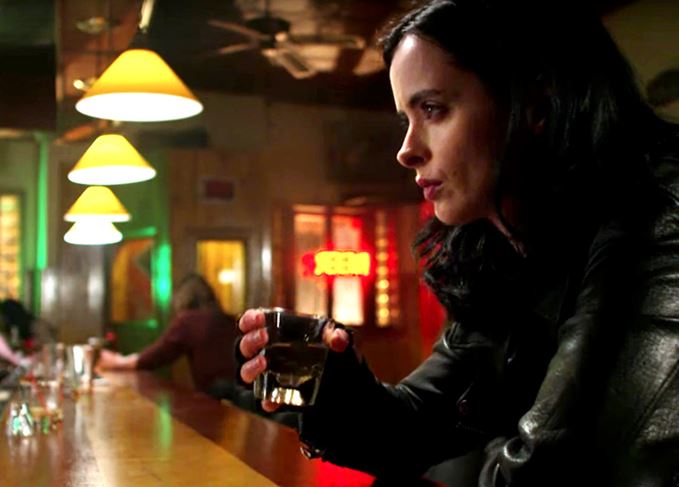 A private dick with a foul mouth and a traumatic past, Jessica Jones seems more at home in her hard-boiled detective show than in the colourful pages of Marvel Comics – even if she does have super-strength. However, the heavy-drinking hero was originally created as part of Marvel’s attempt to bring mature readers back to its brand.

In 2001, the publisher began labelling its books with a series of age ratings, from ‘All-Ages’ at one end to ‘MAX’ on the other. Books sold under the MAX imprint were the publisher’s first uncensored comics, published without the iconic Marvel branding to avoid tempting underage readers. Jones was first dreamed up by writer Brian Michael Bendis and artist Michael Gaydos as the lead character of ALIAS, one of the imprint’s flagship series, as a former superhero (codenamed Jewel) who quit the spandex game and opened up a private investigation agency.

The freedoms that came with MAX allowed Bendis to dig deep into noir genre iconography. Over the course of her first run of comics, Jones investigated violent crimes, grisly murders and mysterious disappearances rather than bank heists or alien invasions. The whisky-drinking PI is a classic Dashiel Hammett-esque trope: as we first meet Jones asleep over a half-empty glass, lit cigarette in hand, it reminds us that we’re firmly in hard-boiled noir territory.

Once the character was established, Bendis began retroactively weaving her into the fabric of the Marvel universe. Everything is connected in superhero fiction: Jones’ best friend is Captain Marvel (who’s just become the star of Marvel’s first female-led blockbuster), Spider-Man is a high-school buddy and she has a romantic relationship, resulting in a child, with fellow superhero Luke Cage.

Marvel quickly began using these connections to insert Jones into the pages of the All-Ages comics, having her resume her Jewel persona as a fully-fledged member of the Avengers, Marvel’s A-list heroes. Written again by Bendis in 2012’s New Avengers Vol. 2, Jones packed in the PI gig and spent the next few years defending Earth from demons, Nazis and supervillains alongside her new teammates.

If the massively popular Avengers series of films takes inspiration from the colourful All-Ages comics, the Netflix series aligns itself firmly with the MAX imprint. Debuting in 2015, Jessica Jones was able to explore all the same issues as ALIAS thanks to its ‘mature audiences’ TV-MA rating.

Talking about the character, series showrunner Melissa Rosenberg told Hollywood Reporter: ‘Jake Gittes [Chinatown protagonist] is sort of the archetype... There weren’t a lot of female characters to model her on, so you just sort of look at the noir and stay true to that genre but build off her character… Whereas [heroes like] Daredevil want to protect the city, she just wants to protect her apartment, save her business and be able to buy whiskey that night.’

Krysten Ritter, who portrays Jones in the series, recognises that the character is unlikely to be using a copita glass or writing tasting notes anytime soon. She told Inverse: ‘I spent days and days figuring out how Jessica Jones would walk, how Jessica Jones sits, how she stands, how she drinks… She drinks whiskey violently and viciously. She’s not taking a sip, she wants to get fucking drunk, so she slams it back.’

How Jones drinks, and the lingering connotations of whisky as a masculine tipple, adds to her ‘badass’ persona, including a fondness for leather jackets and breaking rules. On the surface, Jones’ whisky habit draws comparisons with another famous female PI, Sara Paretsky’s creation VI Warshawski, who was a Black Label drinker – but unlike Warshawski’s healthy love of Black Label and Armagnac, Jones’ favourite drink is the one that’s closest to hand.

‘I’ll have a Bourbon, cheapest one you got,’ she drawls to the cashier in episode three, titled A.K.A. It’s Called Whiskey. Her lack of brand loyalty is underpinned by the sheer variety of bottles such as Cutty Sark, Teacher’s, Four Roses and Jim Beam that litter her dingy office. Jones is never seen drinking a single malt, but one fictitious brand she is seen drinking on multiple occasions is Winston Canadian, a doctored reference to Windsor Canadian that was first used by Marvel in a 1979 issue of Iron Man. Again, with Marvel, everything is connected.

Our picture of Jones as a drinker is one of an indiscriminate whisky inhaler in the face of her struggling to make ends meet. It’s not a pleasant sight, but it’s not supposed to be: Jones’ drinking habit is linked to her dark past and post-traumatic stress disorder.

A big part of Jones in both the show and its source material, her PTSD stems from a long period of mental domination by her nemesis Kilgrave, a narcissistic villain with the power of mind control. The Netflix series follows this closely and in episode eight, Kilgrave even mentions her self-medication over a tense dinner, although he’s serving wine rather than whisky.

Kilgrave: ‘Do you ever think you might drink too much?’
Jones: ‘It’s the only way I get through my goddamn days after what you did to me.’

Jones is a complicated character, at once edgy, cool and deeply flawed. You watch with fascination, but you’d hate to be in her shoes. It’s no surprise this depth and nuance has made her wildly popular: despite Netflix cancelling all its Marvel properties, a third and final season of Jones is poised for release on 14 June, she stars in her own self-titled comic series and her All-Ages Jewel persona has got her own LEGO character. However, her popularity is a double-edged sword, and she has been sanitised for her All-Ages appearances with little to no mention of her drinking.

Although she has been watered down for mass consumption in some quarters, Jones’ continued presence in both darker tales and kid-friendly fare shows she’s got staying power. She may be 40 years younger than her Marvel contemporaries but Jessica Jones remains as compelling a character as Spider-Man ever was, whether confronting a demon from Hell alongside the Avengers or demons of her own at the bottom of a bottle.