Frank Sinatra was, to many, the greatest singer of the 20th century, as well as being an Oscar-winning actor and producer. Off-stage, the life of Ol’ Blue Eyes was a maelstrom of four marriages, countless affairs, controversial alliances and late-night drinking exploits – most of them involving his beloved Jack Daniel’s. 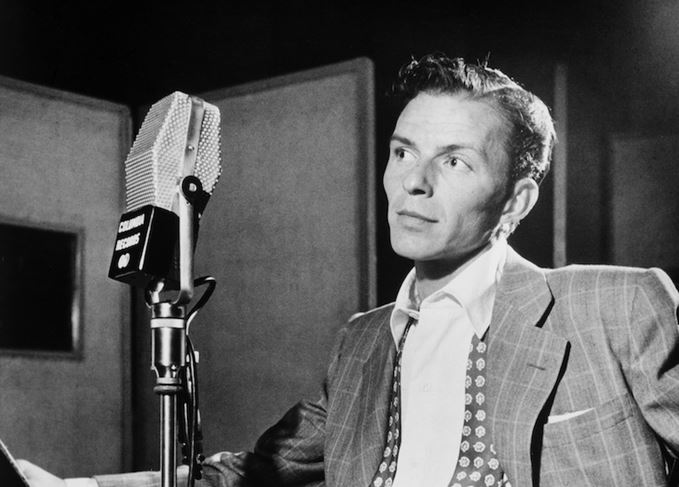 Francis Albert Sinatra (1915-1998) is primarily remembered as a singer, but his remarkable life also included a successful acting career, four marriages and numerous other affairs, connections with the Mob – and a love of whiskey focused squarely on Jack Daniel’s.

Born in Hoboken, New Jersey, to Italian-American parents, the young Sinatra loved big band jazz and idolised Bing Crosby, but was expelled from high school for ‘general rowdiness’ and took jobs as a newspaper delivery boy and in a shipyard before beginning to make a living as a singer.

His vocal range and the quality of his phrasing and timing was all the more remarkable, given that he never learned to read music, and endured hearing problems from birth thanks to a perforated eardrum.

Sinatra’s career spanned several phases: the early swing era under band leaders Harry James and Tommy Dorsey; the years with Columbia Records from 1943; a severe dip in popularity in the late 1940s and early 1950s arrested by his Oscar-winning performance in the film From Here to Eternity.

His best-known work came with arranger Nelson Riddle at Capitol Records in the 1950s, including landmark albums such as Songs for Swingin’ Lovers and Come Fly With Me.

Sinatra famously retired in 1971, only to return in 1973, and was still performing in the mid-1990s, despite a failing voice. He sold more than 150 milion records worldwide, won 11 Grammies and, in the US alone, secured dozens of gold and platinum records.

If Sinatra’s musical career had its ups and downs, his personal life was a blur. Married four times – to Nancy Barbato, Ava Gardner, Mia Farrow and Barbara Marx – he is said to have had hundreds, if not thousands, of other lovers, among them Marilyn Monroe, Lauren Bacall, Judy Garland and Lana Turner.

The one constant thread in this tangled web was Jack Daniel’s Old No 7 Tennessee Whiskey. When he confessed to a doctor that he probably consumed a bottle of Jack a day, the astonished medic said: ‘My God, Frank! How do you feel in the morning?’

Frank met Jack in the 1940s thanks to another great entertainer, Jackie Gleason. As Sinatra poured out his troubles in a Manhattan bar, he told Gleason that he wanted a ‘serious’ drink.

Sinatra had found ‘his’ drink. When living in Palm Springs with Gardner, he would hoist a Jack Daniel’s flag to signal cocktail hour to the neighbours; visiting England, he wore a blazer featuring a crest of two crossed golf clubs and a bottle, plus the name ‘Jack Daniel’s Country Club’. The ‘members’ given similar jackets included only his closest friends.

Jack Daniel’s salesman Angelo Lucchesi became a personal friend. In 1967, when Jack was in short supply, Lucchesi sent a consignment to a thirsty Sinatra. Shortly afterwards, Lucchesi answered his telephone to hear a distinctive voice on the line: ‘Hey, Pisano, you’re my kind of man. I love you for ever.’ Lucchesi later quipped: ‘I didn’t get him on it. I kept him on it.’

A notorious perfectionist, Sinatra was very particular about how he took his favourite drink: a two-finger measure with three or four ice cubes, plus water, in a traditional rocks glass.

Served a glass of Jack Daniel’s filled to the brim with ice at the Four Seasons in Boston, he painstakingly fished out all but four of the cubes, according to Bill Zehme in The Way You Wear Your Hat: Frank Sinatra and the Lost Art of Livin’:

‘The bartender asked: “Is there a problem, Mr Sinatra?” Quietly, he explained: “No, but with all this ice, I figured we’re supposed to go skating here or something. That’s not my sport.”’

Not that Sinatra confined his drinking habits to Jack; he was also fond of Champagne and wine. Less than six months before his death, at a family Thanksgiving gathering in 1997, he responded to a toast by taking a sip of the red wine in front of him and saying: ‘Italian Barbera. Now that right there! That’s one fine wine.’

But, according to last wife Barbara, it was time to run for cover if the gin bottle came out. She writes in Lady Blue Eyes: My Life with Frank Sinatra:

‘There was something about gin that turned him mean. The minute I spotted the gin bottle, I’d turn around, go to my room and lock myself in.’

The one drink he abhorred was water, on the grounds that ‘fish fuck in it’. Woe betide any bartender who set a glass in front of him; Sinatra would snarl: ‘What’s this?! I’m thirsty, not dirty! Take it away. Now.’

In their early days together, Barbara Sinatra reckons Frank was ‘rarely drunk and never suffered from a hangover’, taking only a sip or two from each drink ‘while everyone around him got smashed’.

He was also capable of cutting back on the booze when preparing for a big tour or residency, getting more sleep and – a favourite trick – doing lots of underwater swimming to aid his breathing and vocal control.

But, at other times and linked to his explosive, often violent, temper, Sinatra’s drinking meant trouble, including fist-fights with journalists, or taking out his temper on TV sets or telephones. While on tour in the Far East, there was a mix-up with hotel suites, culminating in Sinatra throwing the phone through the window – only to see it bounce back off the toughened glass and hit him square in the face. ‘What the hell kind of hotel is this?’ he shouted. ‘You can’t even throw a phone through a window here.’

Members only: Only close friends were admitted to the ‘Jack Daniel’s Country Club’

The filming of From Here to Eternity marked a low point, with Sinatra’s marriage to Ava Gardner collapsing and his career in trouble. By the time his plane touched down in Hawaii for the shoot at 5am, Sinatra and co-star Montgomery Clift had passed out through drink. Later, fellow actor Burt Lancaster recalled that he often had to put Sinatra, Clift and author James Jones to bed after their lengthy boozing sessions.

The drinking permeated the good times too. In 1960, at the height of the fame of the Rat Pack, Sinatra, Dean Martin, Sammy Davis, Peter Lawford and Joey Bishop would finish a last cigarette and take a swig of Jack Daniel’s before bounding on stage in Vegas. Once the show ended at 2am, they’d stay up drinking until sunrise, before going on-set to film Ocean’s 11 – and then heading to bed for a couple of hours’ sleep before starting all over again.

To be ‘in’ with Frank, you had to keep pace, and the illustrious few who could manage that – dubbed the American Olympic Drinking Team – included the likes of William Holden, Robert Mitchum, John Wayne, Glenn Ford and Orson Welles. If you fancied an early night, you risked being woken by cherry bombs (fireworks) outside your window, or by a hotel employee paid by Sinatra to drag you back down to the bar.

Partly, this hard-living behaviour was fuelled by an insomniac dread of solitude and the hours of darkness. Barbara Sinatra writes:

‘I asked him several times what it was about nighttime that he feared, but he’d just reply: “I don’t like it,” as if that explained everything. He didn’t sleepwalk or suffer from nightmares; he just preferred to go to sleep after daylight.
‘When he had finally drunk enough and was ready for bed, he’d sleep like a baby for six or seven hours straight. He’d wake up refreshed and hungry for a brunch of bacon, eggs and toast – which he ate almost every day of his life.’

Sinatra Select: This high-end Jack Daniel’s bottling was launched during 2012

The drinking, the smoking, the late nights… For decades, Sinatra appeared immune to their effects, attributing his continued good health to heavy doses of ‘Dr Daniel’s’ – but slowly they began to exact a heavy toll. In a 1994 concert in Richmond, Virginia, Sinatra collapsed on-stage while singing My Way. The broken air conditioning may have been partly to blame, but drinking six double Jack Daniel’s with his pre-show steak dinner probably didn’t help.

Sinatra’s last years were punctuated by a succession of illnesses, from cancer to kidney and bladder problems, mini-strokes and dementia. In November 1996, he suffered a heart attack and was found to have contracted pneumonia; the newspapers prepared their obituaries, only for Sinatra to stage another improbable comeback, as J Randy Taraborelli recalls in Sinatra: Behind the Legend:

‘…he rebounded, was checked out of the hospital and, as soon as he got home, enjoyed a smoke and a glass of Jack Daniel’s, loving every last sip.’

The respite was brief. Although Barbara Sinatra tried to conceal the growing frequency of her husband’s hospital visits – admitting him under assumed names, putting foil on the ambulance windows – the end came on 14 May 1998, when he was pronounced dead at Cedars-Sinai Hospital, Los Angeles, following a heart attack.

‘You gotta love livin’,’ he once said. ‘…Dyin’ is a pain in the ass.’ Frank Sinatra was buried with a number of favourite possessions, including a roll of dimes with which to call his friends, a pack of his favourite Camel cigarettes – and, of course, a bottle of Jack Daniel’s.

His headstone at Desert Memorial Park cemetery recalls the last song he sang in public, and simply reads: ‘The best is yet to come.’