Jackie Gleason started in showbiz as a comedian, finding his big break in the 1940s and becoming one of the most successful stars in the US. But, as well as making headlines for his music, acting and comedy performances, Gleason also hit the papers with his insatiable appetite for food, cigarettes – and Scotch whisky. Iain Russell tells his story. 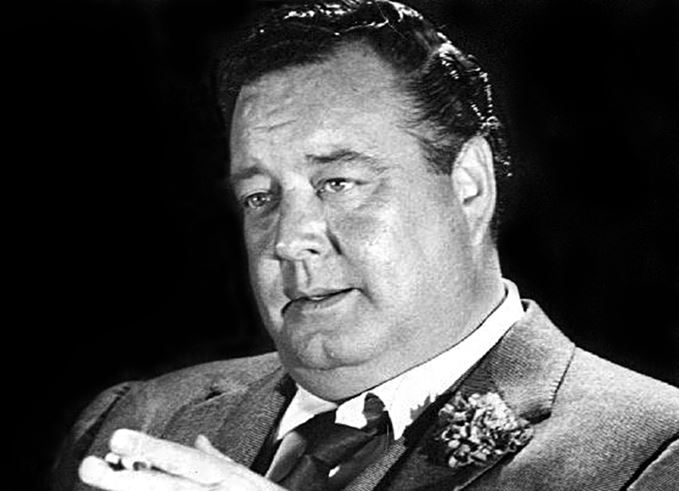 Jackie Gleason: The American television star enjoyed ‘a cream bun on ice’, aka Scotch on the rocks

Jackie Gleason (1916-87) was a comedian who became America’s first great television star. He was also a phenomenally successful record producer, and an accomplished actor who performed alongside such greats as Paul Newman and Sir Laurence Olivier.  But he was particularly famous for his gargantuan appetites for food and alcohol.

Brought up poor in Brooklyn, Gleason excelled at sports, but chose a career in the music halls as a comedian and emcee. His big break came with the advent of television in the late 1940s, when he became the star of the Cavalcade of Stars variety hour. He developed a stable of comedy characters, and a reputation for rehearsing little and ad-libbing outrageously.

CBS offered him a fortune in 1952 to create The Jackie Gleason Show, which achieved unprecedented viewing figures. It included a spot where one of his glamorous ‘Glea Girls’ came out to present him with a cup of coffee. Viewers knew very well what was really in the cup – Gleason’s love of Scotch was already well-known – and each refreshment was greeted with a long sip, a knowing look to the camera and his catchphrase: ‘How sweet it is…’

A regular sketch from the show, The Honeymooners, was transformed into a series that became one of the most successful sitcoms in American television history. But Gleason wasn’t satisfied. He began ‘producing’ easy-listening music, and his 40 albums sold 120m copies. There were mutterings that the music was written and arranged by uncredited professional musicians, but Gleason was unperturbed. ‘The only thing better than one of my songs,’ he quipped, ‘is one of my songs with a glass of Scotch.’

Gleason also pursued a movie career and played some memorable characters on the big screen, including pool shark Minnesota Fats in The Hustler with Paul Newman, and the redneck Sheriff Buford T Justice in the Smokey and the Bandit films with Burt Reynolds.

Away from the stage and studio, Gleason made the headlines as a great eater and drinker. Dean Martin described him as a perfect specimen of physical fatness. His weight is believed to have see-sawed between 230 and 330 pounds (over 23 stone). One of his writers told biographer William A Henry III that there was nothing wrong with him that a famine couldn’t cure.

The Honeymooners: The show became one of the most successful sitcoms in American television history

Gleason would happily wolf down several meals a day, sometimes at a single sitting and followed by a half-gallon of ice cream. As for cigarettes, he could burn his way through five packs a day. He appeared to blame his huge appetite for a loss of libido in middle age, when he joked that ‘sex for a fat man is much ado about puffing’.

Although he would happily down a variety of alcoholic refreshments during a prolonged binge, Gleason was particularly fond of whisky and especially ‘a cream bun on ice’ – his pet name for a Scotch on the rocks. His attitude to drinking was summed up by one of his favourite comedy personae, the bibulous Reginald van Gleason III, who was once asked what time it was. ‘Time for another,’ replied Reggie.

Gleason had effectively left his first wife and the family home by the end of the 1940s, preferring to live in hotels and spend his non-working days and nights in Manhattan’s celebrity bars; Toots Shor’s was a particular favourite. He drank with actors, journalists, authors and sportsmen such as Frank Sinatra, Walter Winchell, Ernest Hemingway and Mickey Mantle, and his gambling and practical jokes became the stuff of showbiz legend.

It was after a drinking session at Shor’s that Orson Wells christened him ‘The Great One’. Gleason proudly adopted the nickname for the rest of his life, ‘although I don`t know if he meant my talent or my drinking capacity’.

Extreme drinking was not only acceptable, but positively encouraged at Toots Shor’s. Once, Gleason bet Shor that he couldn’t drink a bottle of Scotch. Shor won the bet in an hour.

However, Shor insisted that his clientele should be able to hold their liquor. When Gleason passed out at the bar one night, Shor ordered the staff to leave him unconscious on the floor, saying: ‘It’ll teach him a lesson.’ Customers had to step over the television star’s ample bulk for the rest of the evening.

Cigarettes and alcohol: Gleason was known to smoke up to five packs a day

In 1963, tiring of Manhattan nightlife and eager to live in a climate which allowed him to play golf all year round, Gleason insisted that CBS relocate production of the revived Jackie Gleason Show to Miami. He subsequently built a house next to the Inverrary Country Club near Fort Lauderdale and, for many years, the golf course hosted the Jackie Gleason Invitation Classic.

The magazine Golf reported that this new home had a ‘nightclub-sized island bar, behind which the former CBS announcer Ben Wright remembers a mechanical gorilla pouring Scotch’.

Towards the end of his life, suffering from diabetes and popping too many diet pills, Gleason refused to give up drinking. The biographer James Bacon remembers meeting him for what had become a typical lunch: ‘His usual six double Scotches, with no ice, no soda, no water and no food.’ Yet, despite his excesses and his dramatically self-destructive habits, Gleason lived to the age of 71.

Biographers have struggled to separate fact from fiction in the stories Gleason told about his personal life and career. Many were clearly tailored to bolster the legend of ‘The Great One’. It is difficult to reconcile his reputation for impulsive generosity and bar-room bonhomie with the cruelty of some of his practical jokes, his ridiculous displays of self-importance and the outrageous and insensitive demands he made of those who had to work for and with him.

Which of the many characters he presented to the world was his ‘real’ self? CBS executive Oscar Katz expressed the prevailing view of those who fell foul of his bad temper when he was in his cups – as he was so often, even while performing and in business meetings. He told William A Henry III: ‘There was no real Jackie Gleason, except perhaps the belligerent depressive who emerged when he was drunk.’