As an award-winning author, Sir Kingsley Amis carved himself a reputation for his outlandish drinking beliefs, fierce critique of all things alcoholic and particular penchant for single malt Scotch. Iain Russell reports. 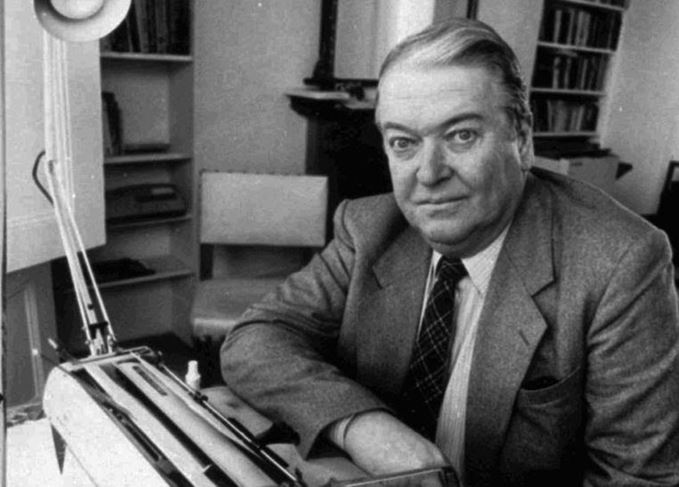 To call Sir Kingsley Amis (1922-95) a drinker would be like calling Cristiano Ronaldo ‘a footballer’, or The Beatles ‘a pop music group’.

Amis was a boozer of boundless enthusiasm and commitment. Drinking came to define him, and he turned it into an art form. There are some who would say that he suffered for his art, but he certainly didn’t seem to mind.

First, some background. Brought up in London, Amis went to Oxford looking for a life of ‘joking, smoking, soaking and poking’. After serving in the Army during the war, he became a university lecturer in English. He might have remained a poetry-writing minor academic had it not been for the runaway success of his first novel, Lucky Jim, which caught the post-war zeitgeist of Britain in the 1950s.

Popularly (but against his wishes) identified with the members of the literary movement known as the ‘Angry Young Men’, Amis  became one of the country’s best-known and most popular writers of the 1950s and 1960s. He published 25 novels, won the Booker Prize in 1986 for The Old Devils and was knighted in 1990.

After flirting with Communism after the war and supporting the Labour Party after 1956, Amis was increasingly conservative in his social and political beliefs, and ended up far to the right of his political hero, Margaret Thatcher.

He became enraged and frustrated by what he saw as the absurdities of modern life, and fostered a public image as a misanthropic and misogynistic curmudgeon. Newspaper and magazine editors learned they could always rely on Amis to provide an entertaining piece pouring vitriolic scorn upon all things trendy and politically correct, whether they be found in literature, politics or the gentrification of the traditional English pub.

Having embarked on a life-long love affair with all forms of alcoholic refreshment, Amis also earned a good living as what he called a ‘dipsographer’, writing about drink and drinking in publications such as The Spectator and Daily Express. Many of his most entertaining pieces were reproduced in two volumes of collected essays entitled On Drink and Everyday Drinking.

As a critic of all things alcoholic, Amis held many unconventional views. He was not a fan of French white wines, for example, and believed that wine in general induced wind and flatulence. Mezcal, sake and bland lagers were dismissed with contempt, while gin and tonic was ‘a mawkish drink best left to women, youngsters and whisky distillers’.

He championed cask ales over keg, but kept cans of Carlsberg Special Brew in the fridge: the super-strength lager was recommended as a morning pick-me-up, but he warned that ‘after a certain amount of it you do tend to fall over’.

Cocktails, punches, cups and coolers were a particular enthusiasm, and Amis’ love of experimentation and innovation would put modern mixologists to shame. Subtlety and complexity, however, were rarely on his agenda.

Evelyn Waugh’s Noonday Reviver, for example, consisted of a big shot of gin mixed with a bottle of Guinness and ginger beer. And the Polish Bison was ‘handcrafted’ from hot Bovril, a tot of vodka, a shake of pepper and, if required, a squeeze of lemon juice – 'this is a very cheering concoction, especially in cold and/or hungover conditions'.

Amis was also a champion of the unfashionable Scotch and milk – ‘this any-proportion drink, which has no name I know of, is a good answer to that sadly rather common problem when you quite fancy a little something but aren't at all sure what view your turn will take of the project’.

There was no doubting that Scotch was Amis’ chosen tipple:

‘Scotch whisky is my desert island drink. I mean, not only that it's my favourite but that for me it comes nearer than anything else to being a drink for all occasions and all times of day, even with meals…’

And not just any old Scotch. While he enjoyed a Famous Grouse, Amis preferred single malts. His favourite by a country mile was Macallan 10-year-old. He discovered the whisky on a trip to Speyside in 1978, the year before it was launched in the UK market and long before the brand became the Acme of Luxury.

Led by chairman Allan Shiach (aka the Hollywood scriptwriter Allan Scott), Macallan launched an inventive and targeted marketing campaign appealing particularly to the creative and the well-to-do working in London.

It was the era of quirky adverts (remember the Luggy Bunnets and ‘Nae Macallan, Nae Fish’?) in irreverent publications such as The Spectator and Private Eye? But Amis loved Macallan above all for its signature Sherried flavour.

Macallan was ‘widely regarded in the trade as the king of malts’, according to Amis:

‘The flavour’s rich, even powerful, but completely smooth, as smooth as that of a fine Cognac, and immediately enjoyable... the only drink you want after it is more of it.’

Elsewhere, he enthused that ‘no spirit known to me… can touch it for sheer quantity of flavour, for smoothness and for – what would you call it? – duration, lastingness, the ability to go on hanging round the mouth and nose’. In typical Amis fashion, he showed his appreciation immoderately.

According to his biographer Eric Jacobs, Amis would write a minimum of 500 words each morning before going to the pub or his beloved Garrick Club for lunch, and would drink two, three or sometimes four large Macallans with a splash of mineral water before his meal.

He also enjoyed a Macallan in the evening, watching soaps on the television. While others might take a bottle of whisky when they went to visit friends, Amis would take a case of his favourite single malt.

As a member of the old school of Scotch drinkers, what would Amis make of the whisky world today? Well, he was acerbic in his comments on whiskies other than Scotch. ‘Irish whiskey in general is indispensable only as the foundation of Irish coffee,’ he wrote.

American whiskeys were ‘second to none in smoothness and blandness’. He found Canadian whiskies boring and likened comparison of Scotch to Japanese whisky to that of real versus instant coffee. One wonders what view he would take of the rising popularity of ‘world’ whiskies today.

As for his reaction to the Department of Health guidelines on alcohol consumption released in recent months: he’d no doubt be apoplectic, but only after downing his weekly allowance on the Monday before supper.