The fine art of quaich making

The quaich, that most traditional of drinking vessels for Scotch whisky, has centuries of history behind it. From a functional beginning it has become an ornament and a medium for artistic expression – whether in its original wooden form or made from silver or gold. Ian Wisniewski reports. 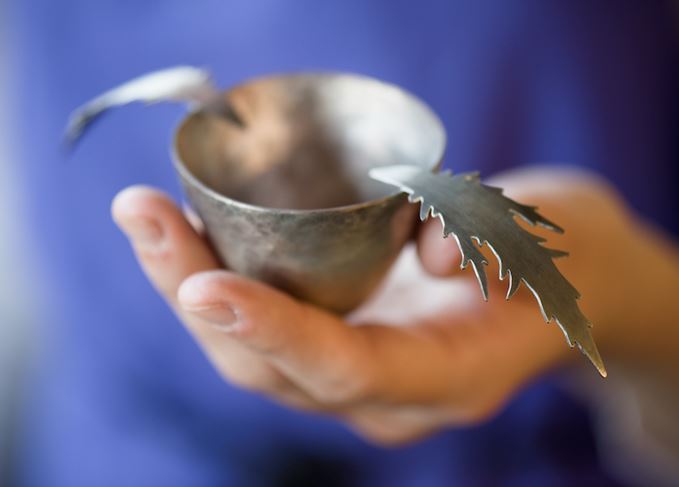 Work of art: The quaich has evolved from functional vessel to thing of beauty (Photo: Shannon Tofts for Keepers of the Quaich)

Describing a quaich as a traditional drinking vessel is factually correct, but hardly tells the whole story. A quaich can transcend function and be a work of art that exemplifies craftsmanship, while producing a quaich from wood or silver is a very different process, and requires a separate set of skills.

Quaichs are thought to have first appeared in Scotland during the 16th century, made from a piece of solid timber. This led to another approach, which was to combine small staves of differently-coloured wood to create more elaborate quaichs. The original, solid timber approach continues to be used by Stewart McCarroll of The Wooden Quaich.

McCarroll’s route to quaich-making came via various jobs, including IT, but he had always enjoyed working with wood – not surprising, perhaps, considering that his father was a joiner.

The original career change plan was to open his own workshop and make furniture on a commissioned basis. However, McCarroll was already making wooden quaichs as presents for friends, and thought this could be a better business proposition. So he created a website to see what would happen. That was 12 years ago.

‘There’s been constant demand,’ McCarroll explains. ‘Quaichs are distinctly Scottish, and that’s what people are looking for. It’s a traditional gift for christenings or retirements, and I sell a lot for weddings. A quaich is often used on the top table, where two families share it to represent them joining together.’

McCarroll is now semi-retired, but is still crafting quaichs at his workshop in Ardgay, Sutherland.

He starts off with a piece of timber, such as oak, which has been air-dried for two to three years, then kiln-dried to ensure stability. ‘Preparing the timber is a long, slow process, so it can be difficult to source, and bigger pieces of wood to make larger quaichs are quite hard to find,’ says McCarroll.

To make a standard-sized quaich, with 100ml capacity, he cuts out a rough rectangle, about 110cm wide by 150cm long, and 55-60cm deep. An outline of the quaich is then drawn onto the block, and the excess wood removed using a bandsaw.

The resulting piece of timber is then positioned on an electric lathe, which spins the wood continuously. Using a chisel, McCarroll first takes off wood from the outside to create the external shape of the bowl and the lugs (handles). Then he hollows out the inside, working by eye rather than using any measurements.

‘This stage takes about 40 minutes and gives a quaich with a rough surface, which needs to be sanded four or five times, using progressively finer sandpaper each time. The final stage is hand-polishing the quaich,’ explains McCarroll.

Oak is the typical wood chosen for quaichs, partly because the grain provides visual appeal. But there’s also another advantage.

‘A quaich needs a certain weight to feel right,’ says McCarroll. ‘Oak is dense, so it gives a good hand-feel. I’ve also made quaichs from old whisky barrels. Whisky and oak are old friends.’

The tradition of making wooden quaichs also evolved into the use of silver. This involved an initial, transitional phase, when silversmiths began adding silver decorative elements and handles to wooden quaichs, in the 17th century. Quaichs made entirely from silver began to appear in the late 17th and early 18th century.

Graham Stewart, a designer, goldsmith and silversmith with 45 years’ experience, has a long history of crafting silver quaichs, and designed and made the Grand Quaich which forms the centrepiece of the ceremonies of the Keepers of the Quaich at Blair Castle.

‘I originally went to art school in Aberdeen, which taught me design, and I became increasingly interested in working with silver,’ he says. ‘My father was a silversmith and I learned as I went along in his workshop, though I also worked for other craftsmen.’

Stewart’s workshop in Dunblane usually has a small range of silver quaichs ready to purchase, but the majority of his work is commissioned.

‘A quaich is a relatively simple vessel to make – there are more challenging things for a silversmith – but it’s a very lovely thing to make,’ he says. ‘I work with a very good team – four of us each have our own speciality. I do the design and the engraving, which is the main way of decorating a quaich.’

The commissioning process begins with practicality, and continues with aesthetics.

‘The first thing to establish is the capacity of the quaich, then I try to work in an appropriate design aspect that links the design to the recipient or an event. I’m very old-school: when I meet a client I start sketching with a pencil on paper.

The starting-point for a silver quaich is a flat disc, which is hammered to form a shallow curve. Then the metal is heated using a gas torch and, when the colour turns a dark cherry red, the heat is removed and the metal given a moment, before being placed in cold water.

Heating softens the metal, which allows the molecules to realign (before continuing). This is the process of ‘annealing’, and is vital, as trying to hammer the shape of the bowl in one go would stress the metal and cause it to crack.

A smaller quaich, with a 10cm diameter bowl, is usually made in three or four stages, while a larger quaich with a diameter of around 25cm would be annealed four or five times.

The handles are made separately, then attached to the sides of the quaich, using a silver solder (ie heating the metal). ‘Handles are harder work than the bowl – they have to be very precise,’ says Stewart.

Reinventing the quaich
Students from Edinburgh College of Art (ECA) were challenged last year to reimagine the quaich in a competition that was the brainchild of Annabel Meikle, director of Keepers of the Quaich, and Stephen Bottomly, outgoing lecturer in jewellery design at ECA.
The result was an imaginative and highly creative set of reinterpretations, all embodying the powerful themes of friendship and hospitality contained within the quaich.
Meikle and official Keepers photographer Shannon Tofts found choosing the winners extremely difficult. ‘We really agonised to make our final choice,’ said Meikle.
Winner was Curtis Yin for his small and highly intricate quaich, designed to be supported between the fingers of giver and recipient; second was Gao Chensihan, with a highly tactile design where fingertips touch as the quaich is passed.
Zhang Sheng was named runner-up for his embossed quaich, inspired by the language of friendship, love and family, while Vasiliki Papadopoulou was commended for her delicate thistle beaker.
Richard Woodard