The true story behind Whisky Galore!

It’s precisely 75 years since the historical event which inspired the book and film of Whisky Galore! But the true story of the sinking of the SS Politician is even more remarkable than the fictional tale, reports Richard Woodard. 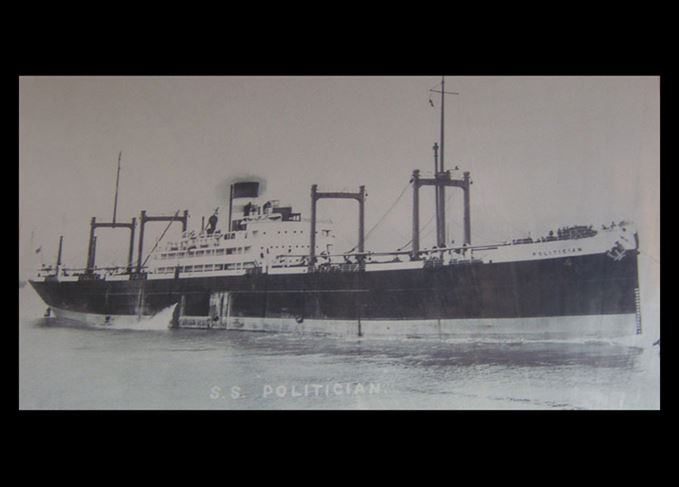 Precious cargo: the SS Politician foundered off Eriskay 75 years ago

Seventy-five years ago today, on the morning of 5 February, 1941, the SS Politician was heading north past the Outer Hebrides, having cast off from Liverpool two days earlier. Its final destinations? Kingston, Jamaica, and New Orleans.

After passing the Isle of Man, the weather had worsened, the winds had risen to gale force and the ship’s Captain, Beaconsfield Worthington, changed course as a result. This was an unwanted distraction and difficulty for a crew anticipating a winter crossing of a U-Boat-infested Atlantic.

Then things got considerably worse. As the winds drove SS Politician further off-course, at 7.40am a lookout glimpsed land; in desperation, the ship swung away, only to founder on the unseen sandbanks off Rosinish Point on the Isle of Eriskay.

Events moved quickly after that. The ship’s fuel tanks were ruptured, and its engines gave up minutes later, leaving the crew to await rescue – and salvage of their cargo.

To the locals, beset by the privations of war and rationing, this was too good an opportunity to miss. Unofficial local ‘salvage parties’ began to form, with the men even donning their wives’ old dresses to prevent their own clothes becoming stained by incriminating ship’s oil.

The SS Politician was carrying all manner of trade goods, from cotton to medicines to biscuits, but the ship is best remembered for the contents of Hold Number 5: some 264,000 bottles of Scotch whisky.

Treacherous waters: the spot where the SS Politician foundered off Eriskay

People came from as far afield as Lewis and, according to reports at the time, few if any regarded what they were doing as stealing; the foundering of the ship made its cargo theirs to save under the ‘rules of salvage’.

The authorities, however, did not share this view, not least because the whisky was destined for the United States – and so no duty had been paid on it.

There followed a second, attempted, land-borne salvage operation, with the police raiding villages and crofts in an effort to recover the liquid cargo – and the locals secreting their ill-gotten gains wherever they could. Or else they just drank them.

Some, however, ended up in court, with a few even serving short jail sentences, but many of the estimated 24,000 bottles of whisky ‘salvaged’ from the wreck by the islanders were never seen again.

As official salvage operations were called off, the ship’s hull was dynamited to destroy any further temptation to explore its contents; but the odd bottle was still washed up on nearby beaches, and a local diver found eight bottles of whisky in the wreck as recently as 1987. Two of these were sold for just over £12,000 by Scotch Whisky Auctions in 2013.

So far, so familiar. It’s an obviously romantic tale, and one which inspired the 1947 book Whisky Galore by Compton Mackenzie, and the 1949 film of the same name, directed by Alexander Mackendrick and one of the most enduring and loved of the Ealing comedies (bizarrely retitled Tight Little Island in the US).

But an arguably even more intriguing aspect of the SS Politician story remained unknown to all but a few until some 60 years after the event.

Comedy classic: A plaque at Castlebay commemorates the filming of Whisky Galore!

According to papers from the Crown Agents, released by the Public Records Office in 2001, Hold Number 5 didn’t just contain whisky; it also held 290,000 10-shilling notes destined for the then colony of Jamaica – in other words, £145,000 or, in modern terms, several million pounds.

At first, the authorities were not hugely concerned. The eight cases containing the money were first reported to be covered in fuel and water; then presumed swept away by the seas. At one point, the head of the salvage operation was said to have given a few away as souvenirs.

Then reports filtered through of some of the notes being found at Benbecula, 25 miles north of the wreck site. This was potentially more worrying but, even if the islanders had got their hands on some of the money, what would they spend it on? In the Outer Hebrides? During wartime?

By June 1941, four months after the SS Politician’s demise, branches of the Barclays and Midland Banks in Liverpool began reporting the presentation of water-damaged Jamaican 10-shilling notes.

By 1943, the notes had turned up in London, across the south of England, in Stoke-on-Trent and in the north of Scotland.

By 1958, the Crown Agents made a final tally: of the 290,000 notes, 211,267 had been recovered; 2,329 had been presented in banks all over the world, including the US, Switzerland, Ireland, Malta and – of course – Jamaica; and the Agents estimated that about two-thirds of these had been presented ‘in good faith’.

How much was taken by the sea, and how much fell prey to the impromptu salvage operations mounted by the locals of Eriskay, Barra, North and South Uist, and Lewis?

We will almost certainly never know.