Salt: we couldn’t survive without it, but it’s become so demonised by the health lobby in recent times that you might think it best avoided whenever possible. Don't be ridiculous, says Signe Johansen. 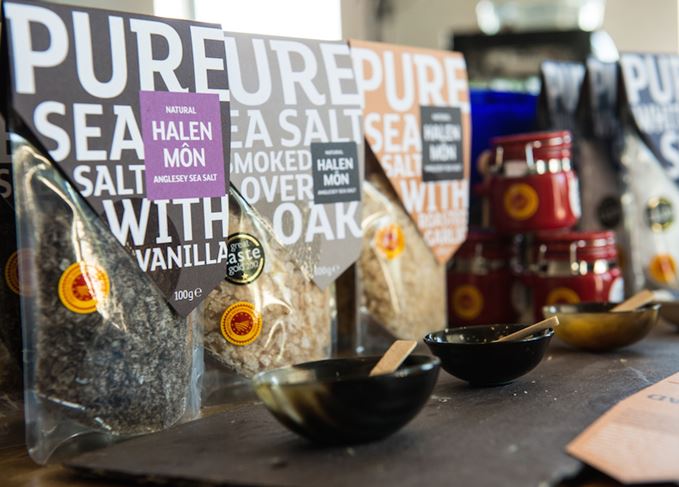 It was time for elevenses on a misty midsummer’s day. Alison Lea-Wilson of Halen Môn sea salt was driving at a fair clip, while I was riding shotgun, eating delicious Welsh honey ice cream straight from the tub.

Fellow food writer Elly Curshen of InStyle snoozed gently in the back seat as we cruised through the picturesque mountains of Snowdonia, or Eryri, the place of eagles, as it’s known in Welsh.

On our journey from south Wales to Anglesey Alison and I covered topics as diverse as bird watching, the fetishising of ‘clean eating’ and our shared love of whisky.

As road trips go, this one was off to a decent start. We may not have witnessed any eagles soaring in the Snowdonia sky that day, but I found myself musing on how much I love salt.

As evinced by the fact that in the Johansen kitchen there are a dozen varieties of sea salt,‘salt of the earth’ is a description I tend to over-use when describing people I like, along with ‘salty’… It’s fair to say I’m a salt enthusiast.

Each year the global market in salt is worth £13bn, yet only about 6% of that is used in food. Just imagine a world without it.

Imagine how bland everything would taste. Imagine how much less buoyant you would be in the sea. We’re surrounded by salt and yet we take it for granted.

Salt mountain: the global market for salt is worth £13bn a year (Photo: Ross Grieve)

The human body contains around 250g of salt. We need a certain amount of salt every day to maintain the body’s muscles, alongside essential electrical and nerve impulses.

Drinking large amounts of water – as we are constantly encouraged to do – will flush salt out of the body and, when this happens, we get a craving for salt so we can recalibrate the salinity of our blood.

Yet this simple, inorganic material has been so thoroughly demonised by health experts in recent years, it’s not unusual to read a nutritionist warning that we should eliminate all added salt from our daily diet and replace it with herbs and spices.

One of the tests of any cook worth their salt (sorry, couldn’t resist) is if he or she can master the art of seasoning. Salting a dish with precision will bring all the constituent flavours alive.

Spices in a curry dance like nobody’s watching when paired with salt. That burnt, bitter edge in caramel is rounded out with the addition of salt. Chocolate, especially the sweeter milk varieties, taste better with salt.

The fashionable avocado is a rather dull, if highly nutritious, green fatty substance on its own, but add a few flakes of sea salt along with a spritz of lemon juice and you’ve got a delicious snack.

Salt balances a dish. Good cooks intuitively understand this. Yet salt has a rich, varied history that few in the kitchen know much about.

Pots of flavour: good sea salt is a boon to an array of dishes (Photo: Ross Grieve)

The Roman army was paid in salt, hence the word ‘salary’. Slaves were traded in salt, which is where we get the expression ‘worth their salt’. Salt was used as currency in Ethiopia as recently as the early 20th century.

Like many ingredients familiar to us today – coffee, tea, spices, sugar – salt was historically considered a luxury item and pure, white salt was publicly displayed at grand tables for centuries as an article of conspicuous consumption.

As Mark Kurlansky explains in his riveting Salt: A World History, during the American Civil War, President Lincoln’s blockade of the Confederate perimeter denied the import of, among other vital supplies, salt.

There were, of course, other factors in the defeat of the Confederates, but the chronic lack of salt was a key reason.

In recent years we’ve seen a resurgence in food DIY, a modern interpretation of ancient techniques such as smoking, curing, fermenting – simple preservation methods that allowed our ancestors to prevent food from spoiling in an age before refrigeration became commonplace.

The Confederate states lacked salt to cure meat, to feed their cavalry horses, to treat infected wounds. It’s no wonder Lincoln considered salt an essential part of his war strategy.

But back to Alison and Halen Môn. We first met at Abergavenny Food Festival in 2009 and, given this Scandinavian’s love of all things salty, we instantly hit it off.

Since then I’ve used Halen Môn’s salts not only in my everyday cooking and at food events, I’ve also included its vanilla salt in many recipes.

For years, Alison and her husband David ran a Sea Zoo in Anglesey, until they decided to shift gear in the mid-1990s and make the most of the fact that they were paying the Queen for the seawater being pumped out of the Menai Strait to the zoo.

Arriving in Anglesey that day, I could see how crystal-clear the surrounding water was, and learned during our visit to their salt cote that the seawater passes through two natural filters in the form of a mussel bed and a sandbank, after which Halen Môn uses charcoal filtration to clean the seawater a third time before it reaches the evaporator.

This sterile vacuum, where both heat and humidity are carefully controlled, allows the seawater to slowly release steam and form a concentrated salty brine, which is then released into shallow crystallisation tanks, where the salt crystals form beautiful inverted hexagons.

These are harvested by hand and rinsed a final time in brine to allow the sea salt flakes to really sparkle.

As sea salt typically contains a lot of bitter minerals which can cloud the flavour of a dish, what makes Halen Môn’s sea salt so exceptional is the pure flavour, thanks to this final rinsing process.

And while minerals only make up 10% of sea salt, the magnesium, zinc, calcium and selenium you find in Halen Môn contributes to a distinctive roundness of flavour which explains why top chefs such as Heston Blumenthal use it, and also why the salt is stocked in top delis, food retailers and food halls such as Fortnum & Mason.

In 2014 the European Commission awarded its salt a Protected Designation of Origin in recognition of this distinctive terroir, geographical location and method of production.

While I’ve always been a fan of Halen Môn’s pure sea salt, what’s also exciting for a creative cook is the breadth of flavoured salts on offer. Celery, charcoal, chilli & garlic, organic spices, roasted garlic, smoked, umami and, of course, my favourite: the heady vanilla that perks up any sweet dish.

So what’s next for Halen Môn now that they’re an established brand? As our visit drew to a close, Alison mooted the idea of a whisky salt. Now that may just supplant the vanilla salt in my affections…