His tenure at Glenmorangie has been marked by a ceaseless tide of innovation and experimentation; his long-term successor is already in place. But Dr Bill Lumsden hasn’t finished probing the potential and possibilities of single malt whisky just yet. Richard Woodard met him. 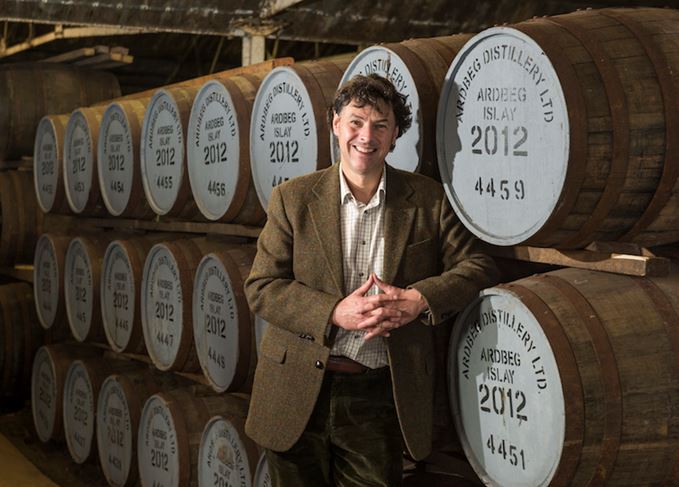 Maybe it’s the ‘Dr’ prefix. Maybe it’s the sometimes unruly mop of hair, or the scattergun, staccato way of speaking. Whatever it is, Bill Lumsden is sometimes characterised as the mad scientist of Scotch whisky, the restless experimenter, the Prof Emmett Brown of single malt.

Not that he cares. ‘I don’t worry about that at all,’ Glenmorangie's director of distilling and whisky creation tells me. ‘I think it’s quite a nice thing to be known for and I am a little bit like that. The way the company has managed me – they’ve built the job around me and my skill set and my personality – not every company would necessarily tolerate someone like me working for them.’

The idea of ‘managing’ Lumsden is an interesting one. His innate scientific rigour is undercut by a determination to follow his own path – one that doesn’t necessarily lend itself to toeing the company line, and one that led him to Glenmorangie in the first place, in 1998, after 10 years with Distillers Company Ltd, the precursor to Diageo.

‘That was a very difficult decision to make, but you know I was always somebody who didn’t necessarily like being too rule-bound and, while DCL was brilliant, you very much had to work to a regimented pattern,’ he recalls. ‘And I thought that moving to this smaller company, where I reckoned I’d pretty much be left to my own devices, would probably be an interesting move.’

Interesting indeed. That ‘smaller’ company has, since 2004, been part of the LVMH colossus, the Unilever of luxury goods, the business built by Bernard Arnault into a group that encompasses Givenchy and Christian Dior; Hennessy and Krug. That’s a large pond, in which Glenmorangie ranks as a mere minnow, but Lumsden isn’t unhappy about that.

‘This is quite an emotive answer, Richard, but in my opinion LVMH saved the Glenmorangie brand,’ he says. ‘There was no focus on the single malt brands. The former board will dispute this, but it was all about volume, and satisfying the City every year with a little bit more profit. In my view, that led to short-term thinking.

‘This is quite a damning statistic and I need to be careful what I say here, but over a 10-year period, under the previous board – a period of time I refer to as The Dark Ages – in sales terms the growth of the Glenmorangie brand was zero, absolute zero, and to me that paints a very vivid picture.

‘And in one of the early LVMH Annual Reports in our time with the company, M Arnault made a very interesting statement that, over a period where single malt Scotch whisky saw spectacular growth, “Glenmorangie chose not to take part in this”.’ Lumsden pauses to mimic thrusting a knife in below the ribs. ‘Whoosh! Get in there!’

By contrast, he ranks the past decade as ‘unquestionably’ the best and most interesting of his career: Glenmorangie has doubled its sales to 500,000 nine-litre cases; Ardbeg has hit 100,000 cases. ‘These are two quite important psychological milestones,’ he says. ‘We’re running the distilleries at pretty much flat-out capacity, so we’re investing for much more growth in the future.’

More growth means more new products, more innovation. But where will this come from? After all the wood-based experimentation that epitomises Lumsden’s tenure, has the book been written on cask finishes?

‘I actually think there’s still quite a lot to be done with wood,’ he counters. ‘There’s one or two wine regions, for example, one or two wine brands that I still want to try to get hold of and try things. There’s one in particular, a very cult wine which is probably the most famous wine from that part of the world, which is the Middle East, and I’m sure you can think of what it is.’

And beyond the cask? ‘If you look at the overall blended complex of a malt whisky, you could argue that as much as 60% – sometimes even a little bit more – is contributed by the wood and possibly by the liquid that has been in the barrels previously, but of the remaining flavour profile, the yeast has to be responsible for a very large chunk of that.

‘And even, if you go back to Islay, a lot of the old distillers will certainly have a view that the peat from the Kintour Moss has a different characteristic to other parts of the island. That’s a bit of a moot point in my mind, but there’s so many things that we haven’t really explored yet.’

Arch-innovator: Dr Bill Lumsden at the launch of Glenmorangie Milsean

For one not overly enamoured of the rule book, Lumsden isn’t entirely convinced that Scotch’s famously strict regulations are ripe for change, mentioning the ‘thin end of the wedge’ and arguing, for instance, against the use of non-oak wood for maturation – ‘I’ve tried a few of them and it was horrific.’

However: ‘I could see some areas, for example the way in which your barley is malted – there’s some scope to do some things in there; I’ve done many things there which I’m keeping up my sleeve to see what may or may not evolve.

‘I can’t help thinking that, back in the day, the distillers for their malt whisky wouldn’t just be using malted barley, dried over a peat fire, there’d be all sorts of other things used. They would be using a mixture of barley and oats, and things like that. I think that would be quite interesting.’

All of that said, even Lumsden acknowledges that innovation for its own sake can go too far, particularly in this febrile age of endlessly demanding marketing departments.

‘I try and keep up with the opposition,’ he says. ‘As you say, it’s not easy because there’s so many new variants, and sometimes I think: “Really? What’s the difference? I don’t really pick up anything”.’

‘And the other one was the Master Distiller’s Reserve and it had Alan Winchester’s signature. God, marvellous whisky! I just loved the complexity, the delicacy of it, it had all the key markers I look for in Glenlivet: the green apples, the slightly custardy sweetness, and it was a truly sublime whisky. It was the best new product, outwith our own stable, that I tasted last year. I keep meaning to write to Alan to tell him about it – just so good.’

Not that Lumsden doesn’t feel the pressure on occasion – he recounts the genesis of travel retail exclusive Glenmorangie Dornoch, the prototype recipe for which was drawn up the same day as the request came in for a ‘one-off, tactical product, a limited release’ from World Duty Free.

The result, he reckons, was ‘too good – I wish I’d kept it for one of the Private Edition releases’, and the fastest-selling single malt ever in World Duty Free. ‘That doesn’t normally happen,’ he adds ruefully. ‘On that occasion we got away with it.’

We’ve spent most of our conversation – over breakfast at London’s Brown’s Hotel, between the launch of Glenmorangie Milsean, the latest Private Edition, and activity for new travel retail release Glenmorangie Tayne – in the company of Brendan McCarron, officially Glenmorangie’s head of maturing stocks, but more accurately described as Lumsden’s right-hand man and heir apparent.

McCarron’s presence prompts talk of Lumsden’s legacy (although he has no plans to head for the golf course for several years yet). Surprisingly, while he goes on to talk about innovation and the likes of Signet, his first thought is of the core range, Glenmorangie Original and 18-year-old.

‘I’d like to think that I respected people’s views of these whiskies, but made them even better, put some bells and whistles on them, reinvigorated the wood management policy, so made it a better whisky to drink,’ he says.

‘If you don’t have the backbone of the core range, then you’ve no platform on which to introduce innovations. I think that’s part of the – I would say, they may not agree with me – but it’s part of the problem with Bruichladdich. They haven’t established a core range or a core expression.

Ouch. Nonetheless, Lumsden is full of praise for the Bruichladdich belief that ‘terroir matters’ – in other words, that the area in which the whisky is made, from barley to bottle, has some indefinable effect on the way it tastes. It prompts one last thought from the great innovator before we part.

‘It’s a completely impossible dream and I don’t know how we would do it, but I’d love to try and make Glenmorangie whisky in a distillery somewhere else, just to see if we could do it,’ he says.

‘So if LVMH turned around and said: “Brendan and Bill, you’re such great guys, here’s £20m, go and build a Glenmorangie distillery at Ardbeg,” it would be interesting to see what would happen. I think what would happen is that we’d squander £20m and get fired. It would answer a lot of questions, possibly shatter a number of myths as well.

‘But we’re scientists – so we need to know the answer.’

BILL LUMSDEN ON...
His first taste of whisky (version #1): ‘That was 1984 as a student, malt whisky, and it was Glenmorangie 10-year-old as it turned out. It was a seminal moment, it was almost like a coming-of-age, a rite of passage.’

His first taste of whisky (version #2): ‘I was 17, and it was Stewart’s Cream of the Barley, with my friend David when we plundered his parents’ drinks cupboard. We were playing air guitar, then we thought, wait a minute, [David’s brother] Richard’s a musician, so we took his Gibson Les Paul with its rosewood case and metal strings – I shredded my fingers and got blood all over it, so it ended in a battering and tears.’

His mentor: ‘I was studying in the Department of Brewing and Biological Sciences as it was then; Dr Geoff Palmer, the West Indian lecturer, took me under his wing because I started going out with the departmental secretary, who he had a wee fancy for. She’s now my wife.’

NAS whisky: ‘The first serious NAS whisky we introduced was Ardbeg Uigeadail. Almost no-one asked us about the age of it – it wasn’t important. To this day, I’m sure that lots of people don’t even realise that Uigeadail is an NAS whisky. The fact that the whiskies are between eight and 12 years old is neither here nor there.’

The ‘good old days’: ‘A large proportion of the whisky made 30, 40 and more years ago was horribly inconsistent… Ed Dodson, the former distillery manager at Glen Moray, he laughs and says: “Bill, you know, the reason we closed the floor maltings down was because the malt we made was shit, because we couldn’t do it properly, we just didn’t have the facilities to do it.” The whisky was all over the place.’