In 1843, William Matheson converted an old brewery at Tain, Easter Ross, into a distillery – and Glenmorangie was born. As the Highland single malt celebrates its 175th birthday, Richard Woodard delves into its past, present and future. 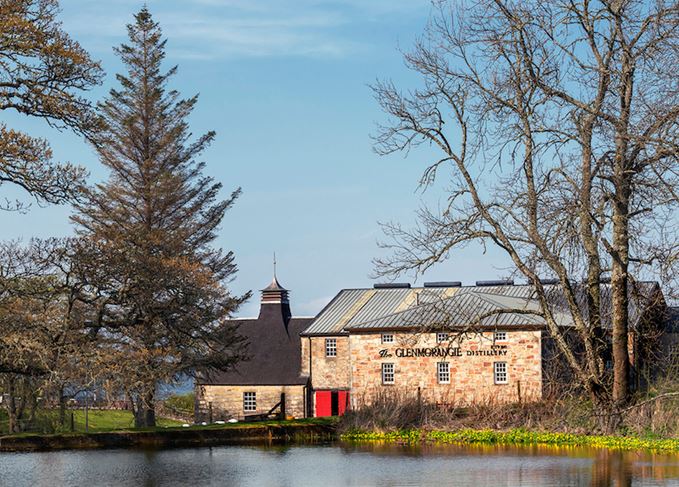 ‘From Balblair we drove to Glenmorangie, through a series of gentle uplands and well cultivated farm lands, calling on our way at the residence of Mr Matheson, who received us courteously and entertained us hospitably. We then drove with him to the Distillery, some half-mile distant, which is certainly the most ancient and primitive we have seen, and now almost in ruins.’

When Alfred Barnard visits Tain in the mid-1880s for his book The Whisky Distilleries of the United Kingdom, there is no airy still house, no eight-metre stills throwing their gleaming copper dizzily upwards; just a ramshackle farm distillery ripe for reconstruction.

But Barnard’s call at Glenmorangie comes on the cusp of the most significant change in the distillery’s long history. Within a few years, it will be reborn.

Barnard’s ‘gentle uplands and well cultivated farm lands’ offer an ideal hinterland for a malt whisky distillery. These are the fertile, sheltered barley fields of Easter Ross, not far from fabled Ferintosh and the cradle of commercial whisky distilling.

Now, as then. ‘That area has grown the best-quality malting barley for the last five years,’ says Brendan McCarron, head of maturing whisky stocks at Glenmorangie today.

‘It is splendidly situated on the margin of the Dornoch Firth, and the sad sea waves wash its foundations. The building dates back to 1738, and was formerly an old brewery, noted from Tain to Inverness for its fine ale.’

Perfect for brewing; perfect for distilling. Whisky came to Tain when William Matheson bought Morangie Farm in the early 1840s. Matheson funded the purchase from his work up the road at Barnard’s previous destination, Balblair; so, on finding a brewery on the estate, converting it into a distillery was a logical next step.

‘It’s the usual way of converting your crop to make more money and use the by-products to feed your cattle and pigs,’ explains Iain Russell, brands heritage manager at Glenmorangie. ‘It’s a traditional farm distillery.’

That ‘splendid’ situation on the Dornoch Firth was a boon in other ways, not least when the railway came to Tain in 1862, offering Glenmorangie’s whisky a route out to the wider world.

In the same year, William Matheson died, leaving his widow Ann and eldest son John to run the distillery (by the time of Barnard’s visit, the youngest son, another William, appears to be in charge).

Glenmorangie was swift to capitalise on the arrival of the railway: by 1872, a warehouse in the City of London was stocked with 20,000 gallons of its whisky, and adverts in provincial newspapers from Ipswich to Oxford helped to establish a network of local sales agents. ‘It gives the lie to the idea that no-one drank single malt outside Scotland until 1963,’ points out Russell.

Tall stills: The original distillery plans from 1887 have a familiar look to them

‘In 1843 this old brewery was turned into a Distillery by William Matheson, and ever since has had to be renewed and repaired to keep it together. At the time of our visit, the proprietor was arranging to build a new Distillery on the same site.’

Barnard visits at the close of the first chapter in Glenmorangie’s history. Shortly afterwards, Ann Matheson sells Glenmorangie to a consortium of businessmen, who have the necessary funds for reconstruction. ‘It’s a microcosm of what happens elsewhere,’ says Russell. ‘The old distillery was in poor repair; she’s a farmer and doesn’t have money to invest in upgrading it.’

Glenmorangie is transformed, and the spirit character we know today begins to emerge. Two steam-heated, eight-metre high stills – the tallest in Scotland to this day; shell-and-tube condensers, rather than worm tubs.

All of this is designed to promote extended copper contact through what was then the latest technology. ‘It’s making a much lighter spirit, not like Islay or Speyside at the time, which were much bigger whiskies,’ says Russell.

New owners, new investment – including the addition of four more stills in 2008, making 12 in total. ‘David Macdonald did what Ann Matheson did before him,’ says Russell. ‘If I’m going to improve this place or make it bigger, I’m up against all these multinationals. Someone else will have to take it on.’

‘The water, which is of excellent quality, comes from the hills of Tarlogie, and is used both for driving the water-wheel and for distilling operations.’

Unusually for Scotch, the water of the Tarlogie springs is hard, not soft, and mineral-rich – one more factor in creating Glenmorangie’s distinctive style of whisky. ‘Glenmorangie’s fermentation time is 55 hours, and I remember I was quite shocked by that when I started, because to get such a fruity spirit I thought you’d need much longer,’ says McCarron. ‘At Oban, it’s 120 hours.

‘And it’s a clean, fruity fermentation that you get. That’s the mineral-rich water, and the stainless steel washbacks keeping the malolactic fermentation down.

‘Then there’s the enormous reflux from those tall stills – huge amounts of copper contact. There’s a massive amount of fruity esters and floral ones as well. It’s not only the fruity element, it’s having absolutely no regard for any heavier, oilier notes as well.’

‘As the old place is so soon to be pulled down, we need not describe the interior arrangements, except to say that only Pot Stills have been in use.’

Originally, they may have been gin stills – that’s the legend, although Russell has found no hard evidence – before they are replaced with two giraffe-high pots shortly after Barnard’s visit.

In 1976, following Glenmorangie’s revival as a single malt, two more pots are added in an increasingly cramped still house; then, in 1990, a three-storey warehouse is converted into a new still house, complete with eight stills, before four more are added in 2008.

Old home: In 1954, Glenmorangie was still using the still house constructed in 1887

‘Peat of fine quality is dug in the district, and is the only fuel used in the establishment.’

Today’s Glenmorangie is far removed from Barnard’s world of peat and smoke, but not entirely disconnected. In recent years, Glenmorangie Dornoch and Finealta have both used peated malt, part of an experimental ethos driven by Dr Bill Lumsden, once distillery manager and now director of distilling, whisky creation and whisky stocks.

The latter begins not with Lumsden but, in the late 1980s, with ‘finishing’ – the transfer of a mature whisky into a different cask type for an extended period of ageing. Even now, there are arguments about who ‘invents’ it, but Glenmorangie is the first to talk openly about it, and plumbs the possibilities of it beyond the Sherry cask.

Lumsden, who joins Glenmorangie in 1995, takes it from there. ‘He saw it was something that was interesting, but that people hadn’t realised the potential and value of it,’ says McCarron. ‘Bill grabbed it by the scruff of its neck in terms of what would and wouldn’t work.’

Finishing school: Glenmorangie released a range of ‘finished’ whiskies as early as 1996

Not just finishing, but cask policy in general. McCarron reckons that, with Glenmorangie Original – the distillery’s core 10-year-old malt – 40% of the flavour comes from the spirit running off the still, and 60% is given by the cask.

For Original, that means American oak casks, used only twice, which is both expensive and complicated. ‘In terms of the recipe, if you didn’t fill enough first-fill casks 10 years ago, you won’t have enough second-fill now,’ says McCarron. ‘It’s just to create that complexity, to allow the fruitiness to show through with the second-fill.’

Glenmorangie also uses so-called ‘designer casks’ – wood sourced from the Ozark mountains of Missouri, with a five- to seven-year supply chain – to create Glenmorangie Astar, but with a proportion also going into Original. ‘We can never get enough of them,’ says McCarron.

‘The whisky is pure Highland Malt, and well known in the Scotch and English markets.’

Following transformation and sale in the 1880s, Glenmorangie’s ambitions as a single malt grow further. As early as 1889, the distillery has an agency in the US, shipping whisky over in cask and bottling it in San Francisco. The owner of famed London restaurant Simpson’s in the Strand is a shareholder, aiding distribution south of the border.

The First World War ends this. Glenmorangie is sold in 1918, to a consortium (blender Macdonald and Muir, merchant James Durham) that only wants the stock, but reluctantly takes the distillery as part of a job lot. Amid two world wars, Depression and Prohibition, Glenmorangie is intermittently silent.

New beginnings: Glenmorangie will have two more stills in production by 2020

Skip forward to the late 1950s and David Macdonald, part of the new generation at Macdonald and Muir, urges the company to use its now rebuilt stocks to revive Glenmorangie as a single malt; he knows the whisky well, having joined the workers in end-of-day dramming sessions when sent to work at the distillery by his father at the age of 16.

In 1959, Glenmorangie is bottled as a single malt once more, and its modern era begins.

‘The annual output is 20,000 gallons.
‘When the new Distillery is built, double the quantity will be turned out; meantime, Mr Matheson informed us that he holds a large stock of not less than five years old Spirits, with which to supply his customers during the rebuilding of the Distillery.’

By 2020, Glenmorangie will have expanded again: two more stills, housed in an eye-catching new still house, plus a small new brewhouse and a little extra fermentation capacity.

It’s a plan for the future, designed to meet both demand and ambition. ‘We can make 6m litres of spirit a year at the moment,’ explains McCarron, ‘and pretty soon we’ll need 6m litres a year.

‘If that’s the case, there’s no room for experimentation, trials and – let’s be honest – a bit of fun. This will give us some weeks in the summer and winter to just have a play and lay down some exciting new spirit.’

But does experimentation risk compromising the Glenmorangie style? ‘You need to have something that is recognisable as the house character,’ says McCarron. ‘That apricot, peaches kind of gig that’s going on in there.

‘Something like Signet is a long way away from that. It’s a big, bold move away from the house character, but you can still find that burnt orange, stone fruit flavour with a little bit of water or ice.

‘There’s a reason why people associate Glenmorangie with certain keynotes, textures, flavours and aromas. There’s still something in there that’s still Glenmorangie.’