John McCarthy is an engineer who joined a brewery, then found himself running Adnams’ Copper House Distillery in Southwold, Suffolk, almost by chance. He talks to Richard Woodard about ‘craft’, oil tankers – and why the Adnams brewers hate rye. 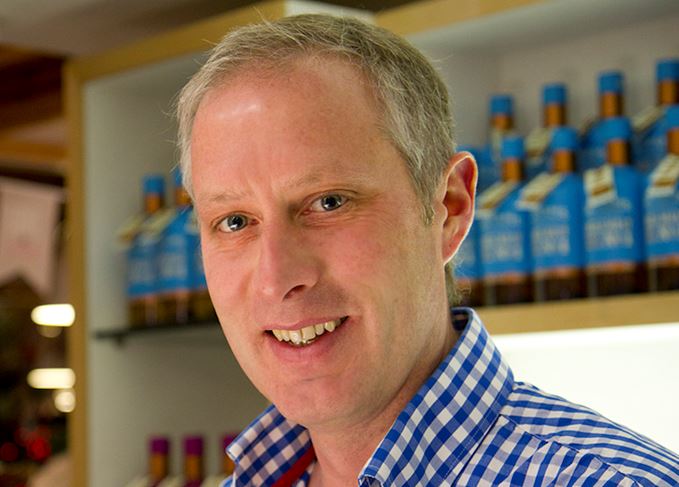 Second job: John McCarthy was an engineer before turning his hand to distilling

‘Adnams has had the yeast we use since 1942, and it’s also used to ferment our beer. We bought the yeast from another brewery, Morgans in Norwich, which burned down during the war, when our own yeast had an infection. There are two strains – one likes to live and one likes to die, so we do have to propagate the one that likes to die off.

‘Instead of using distiller’s yeast, which we would have to buy, our yeast is to all intents and purposes free. We get flavours in our spirit of chocolate and cereal, and it isn’t harsh in any way. That must come from the yeast action on the sugars.

‘This still went in during 2016, so there’s no whisky produced in this style currently on the market. We run it at about 70 litres an hour, so it’s slow – we’re not pushing it. If we ran it quicker, it’d just need more time in cask.

‘The Triple Malt mash is primarily wheat – about 65-70% – then 20% or so barley and a small amount of oats. We know from brewing beer that, if you add wheat to a beer, you make it smooth and creamy. The oats add to that coconutty, sweet flavour.

‘Our Rye Malt is 75% rye and 25% barley. The rye’s grown at Jonathan Adnams’ farm a mile and a half away. The heat this summer made it look perfect – you had to hunt for any ergot [fungus].

Whisky trio: Adnams uses a range of cereal grains, from barley to wheat, rye and oats

‘In a damp summer, all the ears will have these little black lumps growing on them like an ugly wart. That’s ergot. It causes issues in rye bread, but is killed off during the malting process.

‘We plan to make more than we sell, but if sales go through the roof, that will stop. Now our whiskies are all five years old, and we’re getting nearer to six.

‘I came here in 2001 as a brewing engineer, with a specialism in control systems. Essentially, I came here to keep the brewery running.

‘I’ve worked on oil tankers and all sorts of weird things. I had to go out to an oil tanker in Cadiz that was being sent out to Brazil. I did my work and couldn’t test it because there was no water. They said: “Don’t worry, we’ll send you out to Brazil to fix it if it goes wrong. Of course, the bloody thing worked…

‘I did a few brewing exams and they said: “You’re the best engineer to put in this new project we’re planning.” That was the distillery.

‘I was on a flight home from the US with Jonathan Adnams. I asked: “Who’s going to run the distillery when it’s in?” Jonathan said he hadn’t thought about that. I said: “Can I do it?” He said: “All right then.” At the start, it was just two or three days a week – then the distilling took over.

‘Gin was the original idea. This was 2010: there was Chase, and Sipsmith had been going about a year. We went there and saw them in their little garage, met Sam Galsworthy. He seemed a nice guy and made it look easy!

‘I think there was no plan to make whisky to start with – it was not even on the radar. We had the gin and the vodka – the attitude was, let’s put it in a bottle and see if it sells.

‘When I started, we were only distilling two or three days a week. I said: “Let’s make a whisky, put it in casks and see what happens.” We just made 10 casks at the beginning. Then Jonathan decided we should make a little more, and two types – triple and single malt. This was about 2011.

‘We started off doing 100% rye for the Rye Malt. We have a lauter tun and, when they tried to lauter it, it was like glue. Our system’s not made to handle something like that.

‘The guys in the brewery said: “John, if you ask us to do that again, we’ll refuse.” But 25% barley gives us a good bed for the lauter tun. The naturally occurring enzymes help as well.

‘I think our rye is approachable and I’ve not really had anyone complain about it. The rye’s all malted, so a lot of the harshness is broken down. We can’t handle unmalted grains.

‘I’d like to incorporate some peated into a new single malt whisky – not heavily peated, just lightly – but that’s going to be years away because there’s no chance of using peat in the brewery.

‘We’re not producing whiskies to be like something else, but possibly other distilleries are. So St George’s might be trying to replicate Scotch whisky. They’re certainly using the same equipment and methods. And Penderyn are doing what they do.

Local crop: The rye used by Adnams is grown by Jonathan Adnams (left) a mile and a half away

‘Craft? It’s become devalued. Does the distiller who makes Gordon’s gin put less love into their job than the guy who’s making London Distillery gin? We use computer programmes, but I had to set those up, and there’s a “craft” to doing that. We’re all craftsmen – but if you make more than a certain amount a year, you’re not “craft”.

‘We had the same thing with brewing. You’re not a craft brewer because you’re supplying 2,000 pubs. But we make one-off beers for pub groups or our own estate. Our brewers put just as much love into making those products.

‘A lot of regulations have actually made things easier, because they tell you what to do. There’s no worrying about what size casks to use, for instance.

‘The fact that we had 11 or 12 shops was a big factor in us doing the spirits in the first place. Making spirits to sell was a no-brainer. But to a guy starting out in his farm or his kitchen, having to sell what you make must be very daunting.’