One of two senior tour guides at Glenfiddich, Sue Wiles trains a team of dozens of guides to ensure people get the most from their distillery visit. She tells Becky Paskin about wandering visitors, charming in Cantonese, and presenting to the distillery cat. 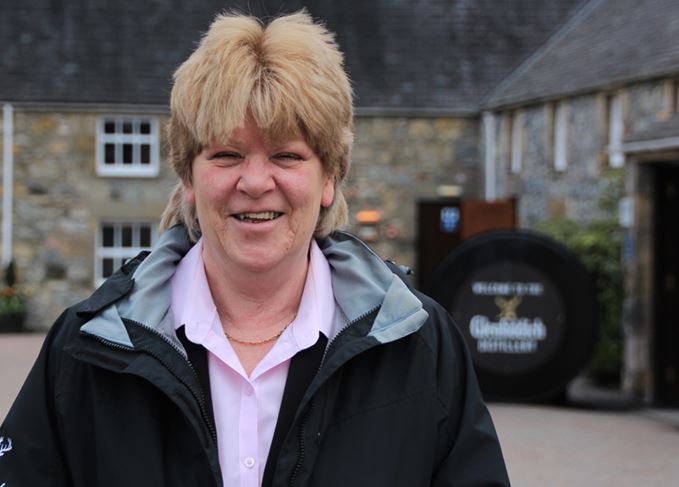 ‘Tour guides are essentially brand ambassadors for the distillery, but are under-recognised as such. We are part of the company’s marketing department, and we are the first contact with any member of the public who comes in. We are the ones who are giving the first impression of the brand.

‘The guides are the ones who make the distillery work. From early in the morning when the doors open to late at night, nobody else has any idea about what goes on here. At half past five at night when all the gates and warehouses are locked down and people say: “That was a good day at work,” they don’t know what it takes to make that day a good day, but the guides do. We’re the front-runners. We’re the ones who do the meet and greet, take people on the tour, pass over the key brand messages we need people to walk away with, and without the right guide carrying the right tools, none of that would happen.

‘After a long career as a licensee – I ran a pub in Inverness called the Culloden Moor Inn for 17 years – I wanted to chill out a wee bit, and a role as a seasonal tour guide at Glenlivet distillery came up. I really liked it, but the reputation of Glenfiddich lured me. I’ve been here just over 11 years now.

‘In January last year we began charging for tours. Some people are a bit surprised, because we’ve been a free tour since 1969. As a marketing tool it was all well and good giving people freebies to get them through the doors. Some people would come along as part of a tour, get their free sample, maybe buy a pencil from the shop, and they’d go home and never think about Glenfiddich again in the future. That’s not the person we’re going for. We’re aiming for the serious whisky geeks, people doing the whisky tourism trail. We want people here because they want to be here, not because we’re offering something as a freebie. We’re not an entertainment set; we are a distillery.

‘For the height of summer Glenfiddich usually has around 26 members of staff, but since we started the new structured tour system we are expecting a lower number – we’re looking for quality rather than quantity. I’m hoping this year to have around 22 guides.

‘We train our tour guides very well and won’t send them out with any member of the public without the proper tools. If I have a guide who’s not confident in a certain section of production, then they will not go out – they will come back to the classroom and we’ll train them.

‘We don’t let guides take more than 15 people, because with a large group you have to herd them and be strict with them. You can’t have people wandering off because we are a busy distillery at full production, so that can be a challenge for a guide.

‘As a family-run distillery you’ll find we have a pride – I don’t know how to describe it, but other distillers don’t have it. It’s because we are working as part of this family, and that’s what we need our guides to communicate in their visits.

‘I’m very proud because a lot of our guides do go onwards and upwards within the industry, some with William Grant and Sons and some for competitor distillers. If they know their stuff, have got passion and want to get on in this industry, they will.

‘The main quality we look for in a tour guide is being able to present yourself – be it to me, my boss, a member of the public or a distillery cat. You have to have the social skills to take people, show them what we do and give them a good experience. People come here from all over the world and some of them don’t speak English. A guide has to be able to communicate to that person what they need them to do.

‘Guides who can speak other languages are fabulous – that’s what we’re looking for, but it’s not the main criteria. If a guide can spout six different languages but doesn’t have the social skills I’m looking for, there’s no point.

‘We had a girl here who spoke Cantonese, a blond little thing at just 4ft 10ins. I remember there was a group in the reception area chatting away in their own language and this little blondie came along and belted out Cantonese at the top of her voice. They were so taken aback they clapped. It was fabulous, I felt so proud. We had another who could sign, and our deaf visitors just adored her.

‘The bulk of our visitors are from Germany, more than anywhere else, though at different times of the year we’ll get visitors from different countries.

‘I’ve noticed a huge change in perception of lady tour guides. When I first started I’d get Scandinavian visitors who had been to 54 distilleries before and they want to know everything. When I appear as their guide for the day they’d pull a face, but by the end of the tour they know my fount of knowledge is second to none as far as a whisky distillery goes. Now visitors are never surprised that I’m a woman, but in the past people were questioning why there were lassies here.

‘I’m not really a drinker. I never liked whisky after running the pub for 17 years – I’d never even tasted a malt whisky, even though it always sat on the top shelf. I was one of these girly girls who said: “I don’t like whisky,” only because in the past I’ve had some cheap blend and it stuck with me as a memory. It’s only since getting into Glenfiddich and learning about the whisky I’ve come to like it.

‘I drink my whisky with a drop of water. Some people talk about nosing glasses just for nosing, but I like a nosing glass for a wee dram. The only malt whisky I don’t put water into is Glenfiddich 21-Year-Old – to me that dram sings and dances, it’s lovely and that little drop of water knocks it for me.’