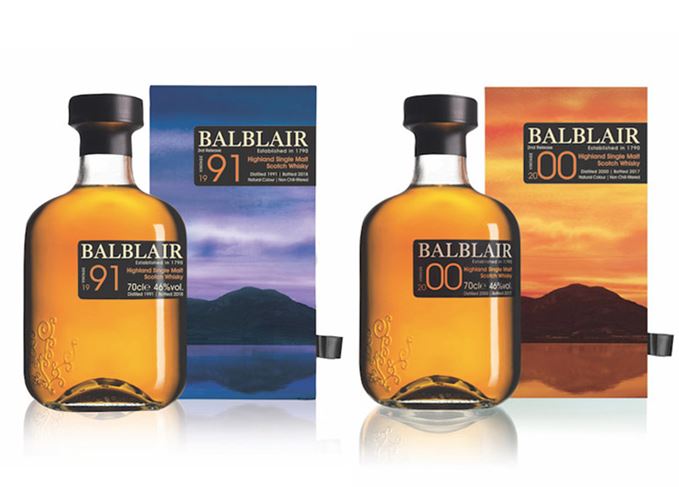 Vintage update: Balblair's two new expressions, distilled in 1991 and 2000, will be available globally

The second release of the 2000 vintage has been matured in ex-Bourbon casks for 13 years, and finished in Spanish oak butts for a further five years. Bottled at 46% abv, the release will be priced at £70.

It’s described as having a nose that’s ‘full-bodied with aromas of seasoned oak, baked red apples and fruitcake,’ and a palate that features ground spices, brighter citrus fruits and honey.

The expression follows the 2000’s first release seven years ago, at the time the youngest whisky in Balblair’s lineup.

Meanwhile the third release of the 1991 vintage has been matured for 24 years in American oak barrels before spending three additional years finishing in Spanish oak butts.

The expression, which is bottled at 46% abv and described as having Balblair’s ‘signature citrus orchard flavour profile’ followed by richer notes of creamy chocolate and Christmas pudding, will be available for £125.

Both expressions will be available globally, both online and stocked in specialist retailers.

‘At Balblair, we only release our whisky when its ready and these new vintages are no exception,’ said Matt Jamieson, Balblair global brand manager.

‘Both featuring a very different nose and palate, the 2000 and 1991 are exquisite drams which are sure to appeal to the most discerning of whisky drinkers.’

Established in 1790, Balblair is one of the oldest working distilleries in Scotland, located on the Dornoch Firth on the east coast.

The distillery is notable for never displaying traditional age statements on its labels, instead opting to use vintages to reference the year of distillation.